Sen. Chuck Schumer of New York, the probable next Senate Democratic leader, has been vocal about the need for climate action and has compiled a solid pro-environment voting record, but he’s never been a leader on the issue, environmentalists and political experts said.

A senator since 1998, Schumer’s principal focus in a 42-year political career has been economic policy and immigration. Since Hurricane Sandy devastated New York City in 2012, he has joined in calls for world leaders to act on global warming.

“Sen. Schumer has made it clear that he views environmentalists as an important constituency and the environment as an important issue for the party,” said David Goldston, director of government affairs for the Natural Resources Defense Council. “On an individual level, it hasn’t been where he’s put most of his time. In a new role, he’ll have to look at things through a new lens.”

Political commentators and journalists say the three-term senator is “exactly who Democrats need” to overhaul the party and regain majority control, in the words of the Washington Post’s Dana Milbank. The current Democratic leader of the Senate, Harry Reid of Nevada, announced his plan last week to retire after 2016. Reid and some other party leaders, including Sen. Patty Murray of Washington, endorsed Schumer for the post this week.

Schumer drew criticism from New York’s anti-fracking grassroots activists last May when he told MSNBC’s Joe Scarborough, “Democrats throughout the country have supported fracking.” The environmentalists flooded Schumer’s office with calls and letters protesting his comment. A few weeks later, he walked back his statement at a fundraiser, said Alex Beauchamp, director of Food and Water Watch’s work in the Northeast and a spokesman for New Yorkers Against Fracking.

“It was an awful thing to say and harmful for the anti-fracking movement in New York,” said Beauchamp. “I think he heard that from the hundreds of calls he got.”

Schumer expressed concern alongside fellow New York Democratic Sen. Kirsten Gillibrand about the expansion of a natural gas pipeline in southern New York. But overall, the Brooklyn native has been relatively quiet on fracking-related issues. He didn’t comment on Democratic Gov. Andrew Cuomo’s groundbreaking decision to ban the drilling practice in New York last December. He hasn’t spoken against a plan to store highly pressurized gases from fracking operations in derelict salt mines on the shores of Seneca Lake in western New York, despite widespread opposition from local environmentalists and businesses.

“Sen. Schumer is not where he needs to be on fracking—but few in the Senate are,” said Sandra Steingraber, an environmental health expert and fracking activist in New York. “The science showing harms and risks to health and the climate from fracking is way out front of the political leadership.”

Schumer’s office did not respond to requests for comment.

As the natural gas boom has driven job growth and lowered energy prices, most Democratic senators say they approve of fracking if done “safely.” Reid, widely considered a champion of environmental issues during his five terms in office, holds the same position.

Environmental and political experts said that even if Schumer isn’t the Senate’s greenest politician right now, that could change when he becomes the Democratic leader. Reid had an average pro-environmental voting score of 71 percent from the League of Conservation Voters between 1983 and 2004. That jumped after he became Democratic leader in 2005, to 92 percent between 2005 and 2014.

Schumer has a lifetime score of 91 percent from the League of Conservation Voters. He participated in the People’s Climate March last September in New York City, joining hundreds of thousands of people in urging world leaders to act on global warming.

“Anybody in New York who doubted the effects of climate change changed their minds after Sandy,” Schumer told reporters before the march. 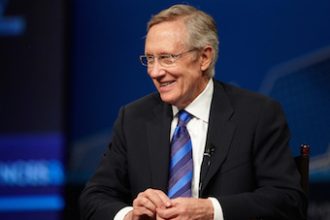