United Nations Secretary General António Guterres said Wednesday that, although the climate crisis is still worsening, he sees a “new world taking shape,” with a shifting mindset, especially among the millions of young people “pushing their elders to do what is right.”

But Guterres said that, right now, the planet is “broken,” and called for an end to humanity’s “suicidal” war on nature.

“This is a moment of truth for people and planet, alike,” he said.

Guterres made the remarks during a state of the planet speech at Columbia University. He was prime minister of Portugal from 1995 to 2002 and served as United Nations High Commissioner for Refugees from 2005 to 2015, before becoming United Nations Secretary General on Jan. 1, 2017.

“Covid and climate have brought us to a threshold. We cannot go back to the old normal of inequality, injustice and heedless dominion over the Earth,” he said.

Although his remarks detailed the stark reality of global warming, including a litany of deadly extremes like floods, heatwaves, wildfires and droughts, the overall message was still hopeful, said Jennifer Tollmann, a Berlin-based climate policy analyst with E3G, a European climate think tank.

“The reason you send out a wakeup call is if you think you can still make it,” she said, referring to the goals of capping global warming and stopping the destruction of nature and biodiversity loss. “He outlined how we make sure this doesn’t turn into one of those post-apocalyptic movies.”

Tollmann said that despite global pandemic woes, there have been encouraging signs that the world’s major industrial countries will curb their emissions enough to reach the goal of the Paris Agreement by limiting global warming to less than 1.5 degrees Celsius (3.6 degrees Fahrenheit). Not least among those signs is the stated intention of President-elect Joe Biden to emphasize ambitious climate action.

“China, South Korea and Japan are all heading in the right direction,” by promising to phase out coal, she said, and the European Union and the United Kingdom have accelerated their path toward net-zero carbon emissions by 2050.

When Climate Action Tracker, a consortium of think tanks and research institutions, calculated the most recently announced steps toward decarbonization, including Biden’s pledges, they found that it would be enough to cap global warming at very close to 1.5 degrees Celsius by the end of the century. All the net zero pledges made as of November 2020 have put “the Paris Agreement’s 1.5°C within striking distance,” according to the Climate Action Tracker.

But to do that would require cutting global fossil fuel use by 6 percent each year through 2030, and right now, the world is “planning and projecting an average annual increase of 2 percent, which by 2030 would result in more than double the production consistent with the 1.5°C limit,” according to the United Nations’ 2020 Production Gap report, released on Wednesday.

He said those commitments have sent a clear signal to investors, markets and finance ministers, and that global financing for energy will change in response to those signals.

“But we need to go further,” Guterres added. “We need all governments to translate these pledges into policies, plans and targets with specific timelines.” Setting specific policies, he said, would provide the certainty and confidence for businesses and banks to invest for net-zero.

In line with Article 6 of the Paris Agreement, he called for the creation of a global carbon market, to phase out fossil fuel subsidies and to “shift the tax burden from income to carbon, and from taxpayers to polluters.”

Guterres also warned that adaptation shouldn’t be forgotten in a world where climate-linked weather extremes caused $150 billion in damages in 2020, and countries that contributed the least to the problem are feeling most of the pain. Helping developing countries adapt and build resilience, he said, is a “moral imperative.”

Tollmann, the climate policy analyst, also said the global shift in energy financing will be central to achieving decarbonization by 2050.

“We are starting to see the potential for the systemic changes we need,” she said. “Paris kicked off this quiet revolution in how we think about financial risk. It wasn’t even in the conversation much before that.”

Now, as she tracks conversations between finance ministers and central bankers, she said, she sees that the issue is being taken more seriously, particularly with regard to the financial risks associated with climate change. Investing in climate-damaging projects is clearly a liability, and new rules in the United Kingdom and other nations that require companies to disclose those risks will also drive investments away from fossil fuels, she said.

“Now is the time to transform humankind’s relationship with the natural world, and with each other,” Guterres said. “And we must do so together. Solidarity is humanity. Solidarity is survival. That is the lesson of 2020.” 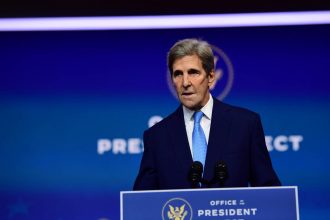 As Special Envoy for Climate, John Kerry Will Be No Stranger to International Climate Negotiations 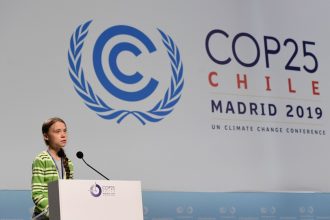