Power providers continue to work on developing long-duration energy storage, the kinds of systems that can fill in the gaps left by the intermittent nature of wind and solar power.

Some companies and investors are betting on emerging technologies to provide this storage.

But a project announced last week got my attention because it uses a technology that is old—or at least middle-aged.

A group of seven nonprofit power providers in California reported they had an agreement with a developer to build a storage system that would run for up to eight hours on a charge using lithium-ion batteries. That technology has been around for decades and dominates the market for electric vehicles and shorter-duration batteries, but it’s not often used for battery systems that run longer than four hours.

The Tumbleweed project would be in Kern County, north of Los Angeles, and have a capacity of 69 megawatts and 552 megawatt-hours. The developer is REV Renewables, which is a subsidiary of LS Power of New York, a company that builds and operates power plants.

The power providers that signed the agreement selected the project from a list of proposals from about 50 developers that presented more than a dozen different technologies.

“When we went into it, we weren’t sure what we were going to see,” said Monica Padilla, director of power resources for Silicon Valley Clean Energy, a nonprofit that is part of the group. “We’d been hearing things about emerging technologies.”

But when reviewing the applications, the group concluded that lithium-ion batteries were the most likely to work as planned at a reasonable price, although the group hasn’t disclosed the costs.

So what are the other storage technologies in the market? The National Renewable Energy Laboratory issued a report last summer on current and emerging options. Here are some of them:

Prior to last week’s announcement in California, I wasn’t aware of any lithium-ion storage project that could run for eight hours.

But when I searched, I found examples, like National Grid’s eight-hour battery that went online in 2019 in Massachusetts.

Several others are being developed, like the Waiawa Phase 2 project on the island of Oahu in Hawaii, which was announced in 2020 and is being developed by AES Distributed Energy.

Another is a project being planned by LS Power to operate alongside the company’s Ravenswood power plant in Queens, New York. Matthew Sahd, a research associate at Wood Mackenzie, told me about this one.

And, analysts have said that lithium-ion batteries would have a role to play in long-duration uses, even as emerging technologies get increasing attention.

“Maybe there’s still a lot of runway in the technologies that comprise lithium-ion battery projects, for advancement and innovation,” said Mark Dyson, senior principal with the carbon-free electricity practice at RMI, the research and advocacy group.

I asked him what’s physically different between a lithium-ion battery that runs for four hours and one that runs for eight hours. He used the analogy of two flashlights that have the same brightness, but one runs on two D batteries, and another runs twice as long with four D batteries.

For a battery storage system, which looks like rows upon rows of shipping containers, the longer duration means many more containers and higher up-front costs.

Lithium-ion batteries are a proven technology, but they also have proven risks and concerns. The batteries rely on rare materials like lithium and cobalt, the mining of which damages the environment. The batteries also are flammable to an extent that some other technologies aren’t.

The group developing the Tumbleweed project includes power providers that together serve 1.6 million homes and businesses, mainly in the Bay Area. The members are aiming to meet their clean energy goals and to comply with an order issued last year by the California Energy Commission that requires power providers to develop 1,000 megawatts of long-duration storage by 2026. The commission defines “long duration” as eight hours or more.

The requirement is leading companies to try new technologies, or in the case of the Tumbleweed project, find new ways to use old technologies.

“It’s a bit of a Wild West,” Dyson said, speaking in general about long-duration energy storage, not just in California. “There are lots of different ways people can drive costs out of current storage technologies, lots of thinking that’s being done by smart scientists about new chemistries or whole new approaches to energy storage, and may the best innovator win.”

Georgia Utility Plans to Phase Out All Coal Plants by 2035: Georgia Power released a plan this week that shows the utility intends to close most of its coal-fired power plants by 2028, and all of them by 2035. This includes some of the largest and most polluting power plants in the country, like Plant Bowen, which would close in 2035. The company said it will make up for the loss of the coal plants by building new renewable energy, energy storage and natural gas plants. The plan, by the state’s largest utility, is a significant step to reduce carbon emissions in a state that has no requirements for renewable energy, as Molly Samuel reports for WABE.

Arizona Regulators Kill 100% Clean-Energy Rules: The Arizona Corporation Commission voted last week to reject a proposal to require a transition to 100 percent carbon-free electricity, a plan that the panel had been working on for five years and had appeared likely to support. The 3-2 vote was the second time in the history of this proposal that a Republican commissioner changed their mind after initially supporting the rules, as Ryan Randazzo reports for The Arizona Republic. “Today is a sad day for Arizona,” said Ellen Zuckerman, utility program co-director of the Southwest Energy Efficiency Project. “The commission failed to advance key consumer protections to eliminate energy waste and make everyone’s electricity bills more affordable.”

The Nation’s Largest Grid Operator Seeks a Two-Year Pause in Considering New Projects: PJM Interconnection, the country’s largest grid operator, is dealing with a years-long backlog of applications by new power plants to connect to the grid, which is mostly due to new solar developments. To work through the problem, PJM is working on a proposal that would update its process for approving connections while also pausing its consideration of new applications for two years, as my colleague James Bruggers reports. This two-year pause is frustrating for some developers, who see it as a barrier to a rapid transition to clean energy. But many others acknowledge that something needs to be done to unclog a system that was not built to handle the thousands of applications that are now pending.

Industry Giants Pitch National Charging Network for Trucks: BlackRock, NextEra Energy and Daimler Truck Holding are working together on what they say will be a $650 million network of stations that can provide electric charging and hydrogen refueling for medium- and heavy-duty trucks in the United States. The companies have agreed to collaborate, and intend to focus their initial efforts on the coasts and in Texas, as Josh Saul reports for Bloomberg. Meanwhile, Volvo is proposing to build a $593 million charging network in Europe, in partnership with Daimler Truck. 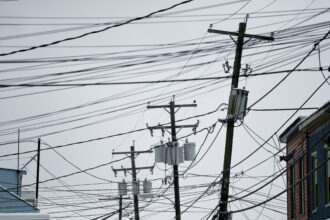