For champion cross-country skier Jessie Diggins, becoming the first American woman to win the cross-country skiing world cup last month was the pinnacle of her career, even more than winning gold in the 2018 Pyeongchang Olympics. But the sport that has defined the 29-year-old’s life is changing with a warming planet. The European mountain towns that often host elite cross-country ski events are no longer guaranteed to have snow, meaning she regularly races on man-made snow. Since her rise to fame in the Olympics in 2018, Diggins has used her platform to advocate for climate action, including lobbying in Washington, D.C. with Protect Our Winters, the environmental nonprofit for which she is a board member.

Inside Climate News recently talked to Diggins about how climate change is affecting cross-country skiing. This interview has been lightly edited for length and clarity.

How have you noticed winters changing while competing?

One place we often go is Rovaniemi, Finland, because it’s literally on the Arctic Circle, and they almost always have guaranteed snow in January because it’s so far up there, and the last time we went up there it was raining they had a small amount of snow and there were flowers blooming and green moss on the side of the trail. It was totally different than we’ve ever seen before. This is something you’d never expect to see; that was incredibly shocking.

I had a number of times where I raced on a ribbon of man-made snow with green grass and mud on the side of the trail and they actually put down carpet on the walkways for spectators so they don’t track mud on the snow.

What does the future look like for cross-country skiing and how can it adapt to a warming planet?

I would love to say I hope we’re able to slow and start to reverse climate change in time to save our sport, that’s obviously the goal. That said, it is changing and we’re going to have to see a season that moves further and further north. Some of our venues in more temperate climates are at risk of losing all natural snow and sometimes it’s not feasible to always hold races on man-made snow.

Racing on man-made snow as a ski racer it’s more dangerous because you have courses built for slower, natural snow, and when you have icy, faster man made snow, some of these corners are definitely more dangerous to navigate.

As an athlete with some amount of fame, how do you see your role in amplifying what’s happening to the climate?

I think it is the reposbilibitly of athletes to be advocates and voices for the things we care about, because we’re really privileged to have this platform. It makes racing and training even more meaningful when you perform well and reach a larger audience, you feel like you have something important to say besides just, “Yeah, I had a great race, I’m so happy.” It brings a level of depth to competition.

One of the big things I’ve learned is how to embrace being an imperfect advocate, because every person I know has a carbon footprint, but that doesn’t mean we can’t or shouldn’t care and work to use our voices in advocacy to enact a larger climate policy that can make a huge impact on our world.

Driving Somewhere? Google Maps Will Take You on an Eco-Friendly Route

Google Maps will soon navigate you to your destination by the most eco-friendly route.

The new feature, developed in partnership with the U.S. Department of Energy’s National Renewable Energy Laboratory, will default to the most fuel-efficient route when a user sets a destination, taking into account factors like traffic and hills.

Even if it’s longer, the eco-friendly route will have a similar estimated time of arrival to other routes, but the user can change their preferences to always default to the quickest route, regardless of fuel efficiency.

The app will also soon have a new interface showing different options for modes of transportation. Cycling, walking, public transport, ride sharing and driving will appear in a list where the user can compare the time and cost, rather than having to toggle between pages in the app’s current format.

Google Maps will also alert users when their route goes through a “low emissions zone”—urban areas where vehicles powered by fossil fuels are restricted. Cities like London, Tokyo and Jakarta have sections where air quality is protected and polluting vehicles can be fined.

The new features are part of Google’s goal to reduce the environmental footprint of 1 billion users by 2022. This goal has led to other carbon-reducing features like calculating potential emissions in Google Flights and offering carbon neutral shipping in Google Shopping.

Be Careful Where You Throw That Face Mask

While cleaning up litter from a canal in the Netherlands last August, a citizen scientist came across a latex glove with a dead perch trapped in the thumb.

In the era of coronavirus, billions of latex gloves and single-use face masks have made their way into our daily lives and then, in many cases, into our environment as waste. When the citizen scientist found the trapped perch—which likely was unable to swim backwards and escape because its scales caught on the latex—two Dutch doctoral students decided to figure out how animal life around the world was being affected by pandemic-related litter.

From a penguin with bits of a face mask in its stomach, to a crab tangled up in the strings of a mask, the pair documented a variety of animals affected by Covid litter.

“We’re all getting vaccinated and hopefully pretty soon we’ll be done with the whole coronavirus, but these plastic face masks will be around for hundreds of years,” said Auke-Florian Hiemstra, a Ph.D. student at Naturalis Biodiversity Center in the Netherlands. “It’s very ironic that the material that protects us is so harmful for the animals around us.”

Hiemstra and Liselotte Rambonnet, a Ph.D. student at Leiden University in the Netherlands, scoured the internet for evidence of animal encounters with Covid-related litter. They also created a website asking for photo submissions. So far, they have documented 36 cases of animals affected by the litter, which they believe is a vast underestimation, since their analysis only looked at online postings in English and Dutch.

“Animals are using the gloves and face masks for nesting material, they’re ingesting the face mask or gloves or getting entangled,” said Rambonnet. “Because their stomachs are full of face masks, they feel less hunger and can die from starvation.”

In October 2012, oceanographer John Englander published “High Tide On Main Street,” a book warning about impending sea level rise because of the warming oceans and melting glaciers in a changing climate. In the book, he outlined a terrifying scenario of a hurricane hitting Atlantic City and New York City, with a devastating storm surge.

On Tuesday, Englander will publish a sequel, “Moving to Higher Ground: Rising Sea Level and the Path Forward,” with up-to-date information about how the shoreline is moving inexorably inland, and what needs to be done to prepare.

“The good news is this isn’t like a tsunami that can kill 200,000 people in one night, it’s not like a deadly hurricane or a pandemic even. We can predict this if we just get smarter,” Englander said. “Our instinct is not to do anything until we have to.”

In the book, Englander highlights how sea level has always been in flux, with a range of about 400 feet between ice ages. Sea levels have been relatively stable for the last 6,000 years, but now rapid warming is melting the massive glaciers covering Greenland and Antarctica, with the potential to drive coastlines inland and submerge thousands of coastal communities.

“The book puts it in very realistic terms and gets rid of the fantasy technologic solution thinking that somehow they’ll figure out how they’re going to fix this,” Englander said. “Put an ice cube on your desk, it’s going to melt and your paper is going to get wet. We know what happens when ice melts.”

Enormous, centuries-old trees usually make up a small fraction of the number of trees in a forest, yet they can hold about half the carbon stored there. Ancient trees, however, may be more likely to fall victim to the effects of climate change, a new research paper shows.

A perspective paper published in Nature this week found that large, old trees were more affected by drought because they’re more susceptible to disruptions in their water transport systems, which move water from their roots to their leaves hundreds of feet in the air. The trees are also more affected by storms, because their height makes them more vulnerable to lightning strikes and wind damage. Climate change is likely to bring about more droughts and more severe storms in forests.

“The tree trunk and wood is made of carbon, so all that massive amount of carbon stays there for 200, 300 years,” said Adriane Esquivel Muelbert, University of Birmingham lecturer and Amazon forest researcher who co-authored the paper. “Once it’s gone, it goes back into the atmosphere. It’s like a massive reserve of carbon that we have. When we talk about climate change we want to keep the carbon locked up, this is one of the most efficient ways of doing that.”

The larger problem though, the paper’s authors wrote, was that little is known about these massive, elderly trees and how they die. Their sheer size makes them difficult to study, and researchers have to cover huge areas of forest to find enough big trees of the same species to piece together a large enough sample size to draw meaningful conclusions. Plus, fewer than 5 percent of these trees die annually, further limiting the research pool.

Esquivel Muelbert said an area the size of a soccer field may have just five to 10 big trees, and they may be all different species in a diverse, tropical forest like the Amazon. 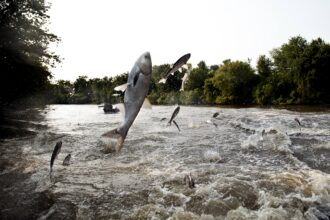 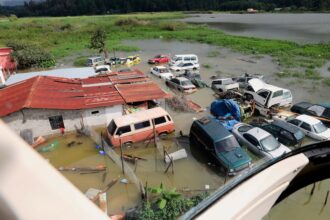