The nation’s largest city has a message for the architects and engineers planning the New York of tomorrow: Fortify new buildings against the ravages of climate change or risk rebuilding as global warming worsens.

New guidelines issued last week by the office of New York City Mayor Bill De Blasio are some of the most comprehensive for how builders should protect infrastructure against rising seas, more powerful storms and climbing temperatures. They draw on science published in 2015 by a city panel of experts that estimates rainfall, sea level rise and other climatic shifts expected for the city in the decades ahead.

For now, developers are not required to follow the recommendations, but the plan is for all city agencies to be using the guidelines for new projects by the end of the year, according to Susanne DesRoches, deputy director of infrastructure policy for the mayor’s Office of Recovery and Resiliency.

“We know that the climate is changing, and we want to make sure we’re designing our infrastructure for what we know is coming,” DesRoches said. The guidelines include specific climate projections for different time frames, and specify how planners should design their projects based on how long the building, bridge or other infrastructure is expected to last.

The New York City Panel on Climate Change study was a wake-up call for the coming damage from more frequent and devastating extreme weather. By the 2050s, average temperatures in New York are expected to be 4 to 6 degrees higher, the guidelines state. Each year there may be six heat waves—stretches of three or more days above 90 degrees—compared with an average of two in recent history. All the extra heat will take its toll on a building’s infrastructure, stressing air conditioning systems and electrical equipment, warping and expanding materials and causing more frequent blackouts.

By mid-century, if a 100-year storm strikes, it is expected drop more than 12 inches of rain over a 24-hour period, compared to just under 9 inches today. Architects would be wise, the guidelines say, to include a green roof or permeable pavement to help relieve stress on drainage systems.

For sea level rise, the guidelines advise adding 16 inches to what current code requires for structures expected to be in use beyond 2040, and 3 feet for those expected to last the century. It also points to an interactive map created by the city that projects flood hazards into the future and overlays them on city streets.

“If the Flood Hazard Mapper shows that the facility is expected to be inundated by high tides within its useful life or if primary access roads are at risk of inundation,” the guidelines state plainly, “consider alternative site options.”

The city will spend the rest of the year testing the guidelines on new projects to assess costs and effects before finalizing them, DesRoches said. Even then, only city projects would be required to follow them, though private developers would be encouraged to use them too.

Klaus Jacob, a scientist who studies climate adaptation at Columbia University’s Lamont-Doherty Earth Observatory, said the guidelines are innovative but only a small step toward where the city needs to be.

“The real problem we have is that we still put a lot of investment in low-lying areas, and this is a matter of zoning and land use policy,” he said.

Many parts of the city’s extensive waterfront continue to attract new luxury residential projects, for example, even though they’ll face increased flooding in years to come, Jacob said. But rather than overhauling the city’s zoning with an eye to rising seas, the city has been addressing climate adaptation piecemeal, even if the pieces such as these guidelines are commendable, he said.

“I think it’s fundamentally a positive step that the city has done this program, there’s no doubt about it,” Jacob said. “My main problem with this is that a document like that cannot address the big problems.” 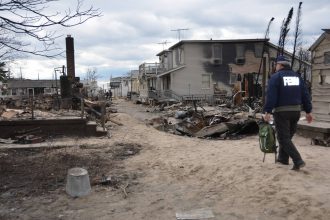