Republican members of Congress chose to hold the first public event for their new climate plan in the country’s No. 1 oil-producing county, in New Mexico, and before an audience of people who work in the oil industry.

This is a climate plan that involves producing much more oil and gas.

It was immediately pilloried by environmental advocates and Democrats as evidence that Republicans want to say they’re doing something about climate change but are not serious about addressing the real problems.

But at this local government conference room in Hobbs, New Mexico, on Thursday afternoon, the people around the table talked about how the country needs to take a realistic approach to reducing emissions while also promoting economic growth. The discussion was likely a test run for the arguments that Republicans will make about energy and climate in the runup to the midterm elections in November.

“I want to be clear on this: I’m fully supportive of moving in the direction of renewable energy,” said U.S. Rep. Garret Graves (R-La.), who leads the Energy, Climate and Conservation Task Force for the House GOP.

But Graves then quickly added that he also supports an “all-of-the-above energy policy” that includes oil and gas because the world is going to need U.S. energy sources to be able to meet rising energy demand.

“We do it safer and we do it cleaner than anyone else,” he said, about U.S. production of oil and gas. He has been a leading supporter of building additional terminals to allow for the export of liquified natural gas to Europe and other foreign markets, which Russia’s war in Ukraine has made a top industry priority.

So where are the emissions cuts in this Republican climate plan? It’s not clear.

House Republicans have not released details beyond a set of bullet points: “Unlock American resources,” which is the part of the plan covered at Thursday’s rollout; “American innovation,” which encourages an expansion of U.S.-based manufacturing; “Let America build,” which covers a streamlining of permit approval for construction of energy projects; “Beat China and Russia,” which covers the idea of U.S. energy exports as a counterweight to geopolitical rivals; “Conservation with a purpose,” which covers tree-planting and making changes to farming practices; and “Build resilient communities,” which covers adaptation to the effects of climate change.

ClearPath Action, a Republican-allied lobbying group, has a website supporting the plan and also hinting at some of the details yet to come.

Some of the climate benefits are indirect but still important, according to ClearPath. For example, encouraging manufacturers to operate in the United States is good for the climate because the country has higher standards for clean air and water than many other countries that tend to attract heavy industry.

The larger significance of the plan is that House Republicans feel like they need to have a climate plan, which reflects the rising importance of the topic across the political spectrum, said Corey Schrodt, legislative affairs manager for climate issues for the Niskanen Center, a Washington, D.C., think tank that describes itself as politically moderate.

“I think that the issue at this point is Republicans are still figuring out what policy prescriptions are going to be palatable, are going to work for them,” said Schrodt, who previously was chief of staff for U.S. Rep. Francis Rooney (R-Fla.), a leader in his party in urging action to address climate change who did not run for re-election in 2020.

“But I think that you’ve seen a very significant shift in the last three to five years, from just the phrase ‘climate change,’ turning off the conversation, and ending all consideration, to where you can actually have those conversations,” he said, about talks among Republicans. “So it’s so striking how different that environment is.”

But even if it’s OK to say “climate change,” Republicans have resisted the idea of a rapid retreat from fossil fuels, which puts the party at odds with the scientific consensus, outlined by the Intergovernmental Panel on Climate Change and many others, about what’s needed.

From almost the moment that news outlets reported the existence of the House GOP climate plan this week, Democrats and environmental groups attacked the effort as a cynical ploy that is close to the opposite of climate action.

“This would be laughable as a climate agenda in 2022 except there is absolutely nothing funny about the climate crisis or Congressional Republicans’ obstruction of desperately needed solutions in the name of lining the pockets of their corporate allies and big oil polluters who fund their campaigns,” said Tiernan Sittenfeld, senior vice president of government affairs for the League of Conservation Voters, in a statement.

Melinda Pierce, the Sierra Club’s legislative director, issued a statement saying the plan is an attempt to “greenhouse gaslight the American public.”

“The overwhelming majority of Americans have been demanding action on the climate crisis for years, while Republicans mocked or ignored their pleas,” she said. “Attaching ‘climate’ to today’s efforts does not change that.”

Mitch Jones, managing director of policy for Food & Water Action, said Republicans are unable to move away from seeing fossil fuels as the solution rather than the problem.

“What’s needed now are serious plans that meet the monumental scale of the crisis, and also deliver the economic benefits and job opportunities that are so desperately needed,” he said in a statement. “We need to elect climate champions this year who will prioritize shifting off of dirty fossil fuels that poison communities and enrich corporate polluters.”

Despite the heated responses, the plan contains several elements that are popular in both parties, like encouraging U.S. manufacturing and streamlining the permit process for energy projects.

“There are probably a suite of policies Democrats and Republicans could support on climate if they could see their way to work together,” said Joshua Busby, a University of Texas at Austin public policy professor.

He lamented that the parties seem unable to agree on legislation, even on policies they both support.

At the New Mexico event, about 20 people gathered in a conference room of the county economic development office, with GOP members of Congress at the head of the table, including Rep. Yvette Herrell (R-N.M.), whose district includes this oil-producing region.

“The messaging or the storytelling has got to happen,” she said, about the need for Republicans and the oil and gas industry to do a better job of communicating the benefits of fossil fuels. (The meeting was broadcast live on Herrell’s Facebook page.)

The audience, including state and local officials and people who work in the oil and gas industry, was receptive to the message. Justin Bliffen, CEO of Brigade Energy Services, a company that operates oil and gas drilling rigs, said, “This is a little bit of an echo chamber here.”

Hobbs is in Lea County, New Mexico, which borders Texas and is located over the Permian Basin, one of the richest deposits of oil and gas in the world.

Rebecca Long, a Lea County commissioner, said the landscape may look desolate to visitors, but it has plentiful resources that sustain the community.

“Yes, we don’t have lakes, rivers, forests, but we have oil,” she said.

Schrodt of the Niskanen Center said it’s a good thing that Republicans feel a need to have a climate plan, and in his experience, Graves and other Republicans who are leading this effort are earnest in their desire to do good policy.

But he also acknowledged the politics: House Minority Leader Kevin McCarthy (R-Calif.), can see that many voters care about climate change and he wants to be able to say the party has a plan.

“Leader McCarthy is positioning the conference in a way that he thinks is best to increase his number of seats and have the best chance of being speaker,” he said. 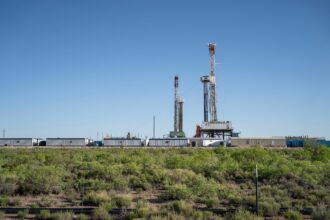 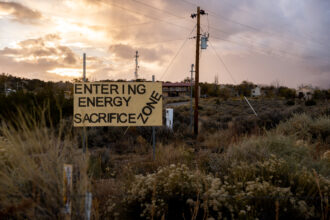 New Mexico Wants it ‘Both Ways,’ Insisting on Environmental Regulations While Benefiting from Oil and Gas 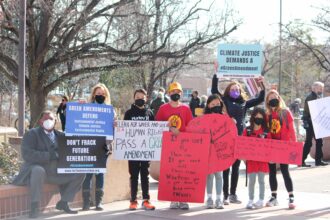 New Mexico Could Be the Fourth State to Add a Green Amendment to Its Constitution, But Time Is Short