The fires that are burning throughout the country offer a window into what we can expect in the future as the climate heats up. That grim assessment comes from Steve Running, a wildfire expert, ecologist and forestry professor at the University of Montana. Running was among the scores of scientists who, along with Al Gore, won the 2007 Nobel Peace Prize for their work on the Intergovernmental Panel on Climate Change.

Running’s insight is so sought after these days that he has speaking engagements scheduled four years out, about one a week. The pace picked up in June, when people began turning to him for his perspective on the massive Western wildfires. As of Monday, there were 52 active fires across the country, most in the West, that have burned more than 900,000 acres, according to the National Interagency Fire Center. Nearly 1,000 homes have been destroyed in the West alone, and at least three deaths have been attributed to the fires.

InsideClimate News caught up with Running last weekend to get his views on what’s going on now, and what we can expect in a world dominated by climate change.

ICN: How do the conditions this year compare to what we saw in 1988 with the Yellowstone fire? (That wildfire, the largest in Yellowstone National Park’s history, burned nearly 800,000 acres and about a third of the park.)

Running: We have had many dry years in the West. But when we get an ignition, and then high winds (which is what happened in the Yellowstone fire and in the recent Colorado fires), the fires turn into blast furnaces. The wind pushes the flames into more fuel faster and injects more oxygen so the fires just explode. Think of when you blow on a sleepy campfire and it flares right up.

ICN: You have said there’s nothing man can do to stop these runaway fires. Assuming we’ll see more of them in a warmer future, how do we prepare?

Running: The big variable during fires is wind. If high wind kicks up, people need to simply get out of the way. For the longer term, the only variable we can control in advance is fuels. So thinning forests and cleaning out dead trees is the best thing we can do.

ICN: Much of the dead fuel that has accumulated has been attributed to pine beetles, which have killed millions of trees. Has climate change played a role in the beetle’s population explosion?

Running: As a rough estimate, you need a few nights of -30 degrees once every five to 10 years (to keep pine beetles under control). Those really cold nights knock the population back, and they take years to recover. In the past, -30 degree winter night temperatures did occasionally occur.

ICN: How much have the wintertime lows been going up?

Running: Here in Montana, the absolute minimum temperature, the coldest night of the year, has gone up 10 degrees.

ICN: This year, we’re seeing fire conditions in late June that normally exist in August. Is that a repeated pattern, or unique to this year?

Running: It’s not common but it has happened in the past. As I recall, the Yellowstone 1988 fire started in June also. Come September, fires will go out naturally (because of) longer, colder nights, dewfall and ultimately, snow. But a fire that starts in June is months from going out naturally.

ICN: You’ve said the snowpack is disappearing two weeks earlier, on average, and that’s contributing to the fire danger. Are there areas of the West that are losing their snowpack even sooner?

Running: The mountain areas we see most at risk are the Cascades and Sierra with “warm” snow packs right near 32 degrees. With very little warming, they melt. Colder, drier snow, like in the higher elevation Rockies, can warm up a few degrees and still not melt until the end of the season.

ICN: How do forest management strategies need to evolve to deal with the increased risks created by climate change?

Running: The single biggest factor is keeping forests thinned out, and dead trees removed. I really wish we had a forest bio-energy industry to use all this forest biomass and pay for the work by buying the material.

ICN: What are some of the things fires are doing now that they rarely if ever did before?

Running: Nighttime low humidity and lack of dewfall allow some fires to burn actively all night long, along with dry winds. They burn down hills, they throw embers miles ahead.

ICN: Do we need to rethink how and where people live in the West? Has this rethinking started?

Running: The big thing is to rethink the “cabin nestled in the trees.” Houses/cabins need to have a good perimeter of nonflammable surface and people need to pay attention to advice on things like flammable cushions on deck chairs and other “fire wise” principles.

ICN: What will the West’s future look like, if greenhouse gas emissions stay on their current pace?

Running: We expect Western landscapes to get more arid as they warm up, and the winter snowpack to diminish in size and seasonal duration. This means that water management will be even a bigger deal than now, if that’s possible.

ICN: Do you think the average person is making the connection between the mammoth fires we’re experiencing, climate change and their increased likelihood in the future?

Running: Sadly, not enough. Few journalists bother to explain the logic to connect today’s events to long-term trends. It is hard for people to understand that increasing probability is not a certainty—but that it’s still important in these types of critical topics like wildfire. These events are giving us a window into conditions that will be considered normal in the future.

ICN: How different does Yellowstone look now, almost 25 years after the big fire? Can we expect similar changes when Colorado and other Western states recover from the current fires?

Running: Much of the Yellowstone burn has trees that are now 20 feet tall. But that’s not true everywhere. On certain severe sites, like dry southwest slopes with rocky soils, trees may never return. They’ll be replaced by sagebrush ecosystems or grasslands. 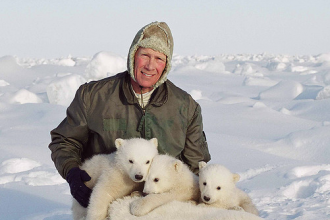 Q&A: One Way to Save the Polar Bear