A plan to sell, rather than close, the largest power plant in North Dakota has received approval from the boards of cooperative utilities across rural and suburban Minnesota.

Of the 28 utilities, only one voted against the proposal last week, but it was the largest of the group, Connexus Energy, based in the north suburbs of Minneapolis.

Environmental advocates helped to organize an opposition that argued the utilities would be better off closing the plant than agreeing to a plan to sell it that includes a 10-year contract to continue buying coal power. The opponents pointed to the coal contract as one of several provisions of the sale that were not in the best interests of consumers or of the environment.

The deal is now close to being done, with opponents now turning their attention to challenging the sale through state and federal regulatory boards. One of the next steps is that the Minnesota Public Utilities Commission needs to approve the sale of an interstate power line as part of the agreement to sell the plant.

The fact that there was a debate at many of the co-op boards shows the growing prominence of environmental concerns at utilities that have long been slow, compared with larger, investor-owned utilities, to cut emissions or invest in renewable energy.

Michael Overend, a customer of Cooperative Light & Power in the northeast part of the state, said he was disappointed that his co-op board voted 3-2 to support the sale.

“This is important because, to me, climate change is the single most important issue we’re facing right now,” he said. “We’re leaving a terrible mess for our children and their children.”

Overend, a veterinarian and a donor to environmental groups, said the positive thing that could come from this debate is that cooperative customers are becoming more engaged and holding leaders accountable.

Opponents of the sale have said that too few cooperative customers—who are shareholders or “member-owners” in the co-op business model—were aware that an important vote was happening.

Supporters of the sale “did a great job of controlling the information, not making it public, not making it available and having a very short timeline for the decision to filter through local cooperatives,” said Duane Ninneman, executive director of Clean Up the River Environment, or CURE, a Minnesota-based nonprofit that works on environmental issues and on improving accountability in electric cooperatives.

The plant, Coal Creek Station, is being sold by Great River Energy, a Minnesota company that provides electricity to the 28 member utilities. The buyer is Rainbow Energy Marketing of North Dakota, which has said it intends to retrofit the plant using carbon capture technology.

Great River confirmed the results of the vote in a brief statement and had no comments from its CEO, David Saggau, or any of its leaders.

Great River said last year that it was going to close the plant in 2022 following years of running the plant at a financial loss, but then changed course and in June announced the plan to sell the plant and the power line. The change followed a push from North Dakota state and local leaders to prevent the closing and find a buyer.

Great River has had little to say publicly throughout the process. Rainbow Energy did not respond to a request for comment for this story.

Much of the public lobbying has been done by labor unions whose workers would lose jobs if the plant closes, like the Laborers’ International Union of North America.

“We’re really happy to be able to turn the page and look forward in North Dakota,” said Kevin Pranis, who works for the union’s office that oversees Minnesota and North Dakota, speaking about the approval by the Minnesota cooperatives. His members do maintenance at Coal Creek and other power plants, and also do work on wind turbines.

He said much of the campaign against the sale has been based on a mistaken understanding of what Great River is proposing. The sale agreement says Great River would continue to buy most of the plant’s output for about two years, and then would buy a much smaller share, 300 megawatts, for the remaining eight years.

Opponents of the sale view the plan as so deeply flawed that there is no room to support it.

Connexus Energy spelled out some of the concerns in an open letter to its customers posted Friday, explaining why its board voted unanimously to reject the proposal. Under the governing structure of Great River Energy, Connexus is still bound by the sale contract because enough other utilities voted to approve it.

“The Connexus Board of Directors finds the decision and approach to sell Coal Creek Station and related transactions have neither fulfilled savings Connexus expected for its members nor reduced greenhouse gases by enabling the continued operations of that plant,” said the letter, signed by CEO Greg Ridderbusch and Board Chairwoman Fran Bator.

Connexus views the plan to install carbon capture at the plant as “highly speculative” and dependent on federal tax credits.

Also, Connexus takes issue with the idea, put forward by Great River, that selling the plant will help keep the electricity grid reliable for customers, noting that the multi-state grid that includes Minnesota and North Dakota has plenty of power plant capacity and is unlikely to face the kinds of problems with reliability seen in Texas this winter.

Connexus serves about 138,000 households and businesses, making it the largest of the cooperatives served by Great River, which serves about 700,000.

The board of the second-largest cooperative, Dakota Electric, voted 8-3 to support the sale, according to people present at the meeting.

“For Dakota Electric’s board, the question has been what is best for our members while balancing rates, reliability and environmental concerns,” said Jerry Pittman, the board chairman, in a statement.

Now that Great River Energy members have approved the sale, opponents of the plan are pinning their hopes on getting the Minnesota Public Utilities Commission to reject approval of selling the power line, which would have the effect of canceling the entire agreement to sell the plant.

The other remaining step is approval of the plant sale by the Federal Energy Regulatory Commission.

Great River had been arguing for a quick approval by the state commission, but opponents successfully got the panel to extend the comment period from July 28 to Aug. 11.

Environmental groups, including CURE, Fresh Energy, the Minnesota Center for Environmental Advocacy and Sierra Club said in a filing with the commission that the sale of the power line is of vital importance because it is one of the only ways of delivering renewable energy from North Dakota to Minnesota.

The groups have concerns that the line is being sold for less than market value, and that Rainbow Energy would then control a valuable asset that is now owned by Great River, and, by extension, its customers.

The sale price of the line is $225 million, while the plant is being sold for $1, according to Michael Noble, the executive director of Fresh Energy, who said he got the figures from Great River, as Inside Climate News first reported last month. Great River has said it would not confirm the figures, citing a confidentiality agreement.

Because of this, advocates like Ninneman say they realize the odds are long that they will be able to stop the sale of the plant and the line. Ninneman said the larger point is to do whatever can be done to reduce the use of coal power and to make cooperative utilities more transparent and accountable. 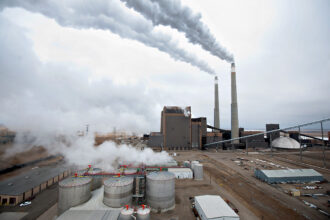 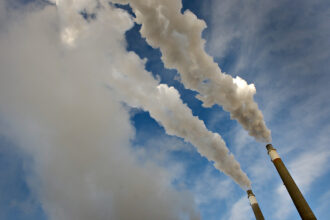 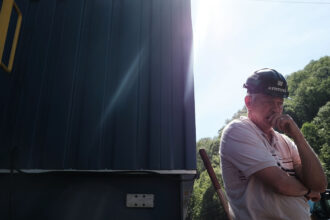