Following the first presidential debate between Hillary Clinton and Donald Trump, the gulf between the candidates has never seemed deeper, perhaps most alarmingly so on climate change.

The election shapes up as the most significant possible choice when it comes to climate policy. Clinton, though not committed to a swift transition away from fossil fuels, vows to build on the climate policies of the Obama administration and live up to U.S. commitments to the Paris accord. Trump, in contrast, pledges to eliminate the Environmental Protection Agency and “cancel” the Paris agreement.

More fundamentally, the election is a choice between one candidate who accepts the global scientific and political consensus on the causes and cures for climate change, and one who rejects both.

“The 2016 presidential election can really be seen as the most important referendum on climate change, and on positive action to make the planet a livable place,” said Daniel Kammen, physicist and founder of the Renewable and Appropriate Energy Laboratory at the University of California, Berkeley. “Secretary Clinton and Donald Trump differ more on clean energy and on climate change than on any other issue.”

Peter Clark, a paleoclimatologist at Oregon State University who co-authored a study in Nature Climate Change that calculated the global warming that already is inevitable, said the decisions made in the next few years will have profound consequences. “If we delay any longer, we’re just committing ourselves to greater impact, and greater economic costs,” he said. “We are falling off the cliff as far as what we need to do to combat emissions.”

Why is this election so crucial for climate action? Here are the major ways the next U.S. president can influence the arc of history:

The Paris agreement is the first climate pact that requires emissions-cutting commitments from every one of the 191 nations that have signed it. And it demands a worldwide transformation to carbon-free energy sometime in the second half of this century. For its part, the U.S. has pledged to cut greenhouse gas emissions by up to 28 percent below its 2005 level in 2025.

If he were elected, Trump would not have the power to “cancel” the agreement, which is a legally binding pact under international law, and which will already have entered into force by the time he takes office. The United States, having already ratified the deal, technically wouldn’t be able to exit until 2020, after giving two years’ notice. But Trump could eviscerate the treaty by directing that the U.S. do nothing. The U.S. is the second-biggest carbon polluter behind China, responsible for 18 percent of current annual emissions and 26 percent cumulatively. If it were not committed to deep cuts, there would be no meaningful solution to the global climate crisis.

“Such a decision would make it far more difficult to develop effective global strategies for mitigating and adapting to climate change,” 375 members of the National Academy of Sciences, including 30 Nobel Prize winners wrote in an open letter expressing alarm at the possibility of an exit from the Paris accord. “The consequences of opting out of the global community would be severe and long-lasting—for our planet’s climate and for the international credibility of the United States.”

Without naming him, the letter included an extraordinary rebuke of the Republican Party for nominating Trump. “It is of great concern that the Republican nominee for President has advocated U.S. withdrawal from the Paris Accord,” the scientists wrote.

Like the U.S. exit from the 1997 Kyoto Protocol, which President George W. Bush formally renounced in his first year in office, a U.S. “Parexit” also would inflame the resentment from the poorest, most vulnerable countries, who contributed the least to global warming, but are suffering the greatest impacts.

“It could start to unwind the web that tenuously holds it together,” said Michael Oppenheimer, an atmospheric scientist at Princeton University, who has served as an adviser to the Clinton campaign. “It doesn’t take very much for countries to start distrusting each other, when the most influential country doesn’t live up to its commitments.”

Clinton has pledged to “defend, implement, and extend” the Clean Power Plan—President Obama’s signature climate policy to cut carbon pollution from the nation’s electric power system. Even with the Clean Power Plan, U.S. policy doesn’t go far enough to meet the U.S. goals under the Paris agreement, as a new peer-reviewed study in Nature shows. But the new regulations would take a vital step by tackling the single largest source of U.S. global warming emissions.

If the Clean Power Plan is upheld by the courts (it was put on hold by the Supreme Court in February and is currently being argued in a federal appeals court), it would also lay a groundwork for more rigorous action to cut emissions from oil, cement and other industries.

“A Clinton administration would be about gap-closing—broadening into new emitting sectors, and going deeper into others,” says policy analyst Kevin Book, of Washington, D.C.’s Clearview Energy Partners, which conducts research for institutional investors and corporate strategists.

Trump has vowed to rescind the Clean Power Plan within his first 100 days in office.

He has even said he wants to abolish the Environmental Protection Agency, which is responsible for carrying it out. That’s no small feat, given that the agency was created by law—one signed by President Nixon. Trump has named a prominent climate science denier and longtime foe of regulation, Myron Ebell of the conservative Competitive Enterprise Institute, to lead his EPA transition team. The administration might even move more quickly to gut the regulations by asking Congress to eliminate the budget to enforce it, quite likely an easy ask if the Republicans retain control.

It would be difficult for a Trump administration to undo the Clean Power Plan, if it’s upheld by the federal courts. But the next president will name the next Supreme Court justice, and it’s a given the high court will decide the Clean Power Plan. The justices could even revisit their 2007 ruling that carbon dioxide is a pollutant under the Clean Air Act—the underpinning of all EPA greenhouse gas rules.

The loss of the Clean Power Plan would erode the foundation on which the Paris treaty is built. Oppenheimer points out that after Congress failed to pass a cap-and-trade bill early in Obama’s first term, the administration’s drive to develop an alternative path was critical in bringing China to the bargaining table for the joint climate agreement between the world’s two largest carbon emitters that was inked in November 2014. That deal, in turn, set the stage for the Paris pact the following year.

“Without U.S. domestic leadership, there is no China agreement,” said Oppenheimer. “And without China bellying up to do its part, there is no Paris accord. That’s why U.S. leadership on both the domestic and international level remains a crucial element of global progress on climate change.”

Clinton’s energy platform, essentially an extension of President Obama’s all-of-the-above strategy with no firm goals to reduce oil and gas drilling, has disappointed many progressives in the Democratic Party. As Secretary of State, she pursued an initiative to promote U.S. fracking technologies overseas. Her campaign has received donations from Washington, D.C. lobbying groups that have oil and gas clients. She has refused to take a position on a carbon tax.

During the Democratic primary, Bernie Sanders’ call to keep fossil fuels in the ground energized his followers and pressured Clinton to move further to the left on energy issues. She formally came out against the Keystone XL pipeline, called for an end to drilling in the Arctic and off the Atlantic coast and called for restrictions on fracking and other drilling.

She also touts a renewable energy plan that includes installing a billion solar panels in the United States by 2020 and generating enough renewable electricity to power every home  in America in the next 10 years.

Climate scientists and activists agree that Clinton’s plan does not go far enough, but are committed to electing her and pushing her further once she is in office.

“If you look at the math, if your goal is to keep the temperature increase below 1.5 degrees, you have to not only stop further development, you have to dismantle the fossil fuel infrastructure we have in place,” said Jacob Scherr, an attorney who is former director of the international climate program at the Natural Resources Defense Council. “I share what Bernie Sanders is saying. I really do believe we need a real mobilization of resources, technologies, and engagement. But I say to folks if you’re for all that, you want to support Hillary Clinton in a big way because she has the potential for delivering on that vision.”

Trump, on the other hand, has not released the kind of detailed, and cohesive energy policy typically developed by presidential candidates. In the one speech where he laid out his vision, at a North Dakota fracking industry conference, he grandly promised to achieve “complete American energy independence,” vowing that under his administration, the country would extract as many fossil fuels from the ground as it can.  A study in Nature last year calculated that globally, a third of oil reserves, half of natural gas reserves and 80 percent of current coal reserves need to remain in the ground to have even a 50-50 chance of limiting warming to relatively safe levels.

It is clear by Trump’s rhetoric and choice of advisers, including Ebell and Harold Hamm, chief executive of the leading fracking firm Continental Resources, that he would work to roll back any restrictions that he feels burden fossil fuel suppliers.

Trump is not likely to succeed in his promise to rejuvenate U.S. coal production—a refrain he has targeted to swing states that have lost mining jobs, like Ohio and Pennsylvania. That’s because the losses are due largely to market forces, namely, competition from natural gas and renewables, as well as federal pollution regulations. “No matter how much he might wish it, he cannot bring back coal demand that has been extinguished by the market,” said Book.

On oil and gas development, though, a Trump administration would be able to remove barriers now in place and squelch further regulations. He has vowed to rescind the EPA’s Waters of the U.S. rule that was finalized earlier this year, a measure that was meant to clarify federal protection for thousands of waterways and wetlands, which is vigorously opposed by the fracking industry in North Dakota. On Trump’s short list for Interior Secretary, sources have said, is another oil executive, Forrest Lucas, the co-founder of Indiana-based Lucas Oil.  Trump has promised to “lift moratoriums on drilling in federal areas,” which are all under Interior’s purview.

Trump’s no-holds-barred energy development vision has done more to galvanize environmentalists’ support for Clinton than her own tempered embrace of climate policy.

“If we have a climate denier in the White House, we will lose momentum, and the result will be that we will race past a 1.5-degree increase on the way to 2 degrees,” said Scherr. “Donald Trump can fool a lot of people, but you can’t fool Mother Nature.” 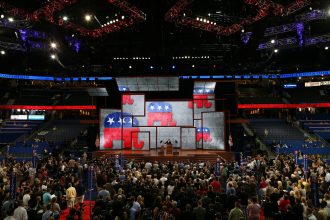 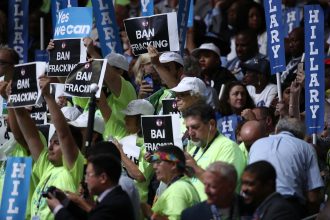 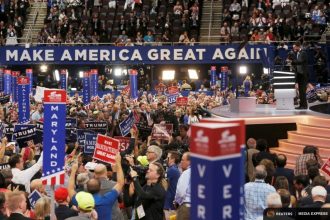 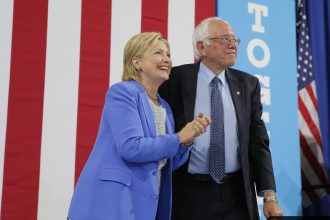