“Don’t panic,” said Heather Mirletz at the Colorado School of Mines, lead author of a recent paper that challenges several assumptions about what could happen when today’s generation of solar panels near retirement age.

She has some encouraging news for anyone deeply concerned, or even mildly agitated, about how the world is going to deal with solar panel waste.

The paper, published in the journal PLOS ONE, argues that the panels will last longer than earlier estimates, and that solar farm operators should prioritize keeping panels in the field for as long as possible.

If solar panels can last 40 to 50 years, which is roughly double what used to be the rule of thumb for lifespan, this changes the equation for the timing of their replacement and the amount of waste produced by the energy transition. And that kind of longevity is not much of a stretch, considering that new panels often come with warranties in the 25-year range, which indicates they should last well beyond that timeframe.

The paper could be read as a counterpoint to some of the estimates in a 2016 report from the International Renewable Energy Agency that has been widely cited (including by me) in discussions about rising demand for solar panel recycling. The report projected that the United States would have a cumulative total of 7.5 to 10 million metric tons of solar panel waste in 2050.

Since 2016, the pace of solar power development has accelerated to the point that old estimates are no longer reliable. Based on this growth, the amount of waste in 2050 would be much higher than IRENA projected.

But that’s not the case, according to Mirletz and her co-authors. Using more recent data about the reliability of solar panels, they estimate that the United States will have a cumulative total of 8 million metric tons of waste in 2050. Considering the increase in assumptions since 2016 about how much solar will be deployed, that’s a big decrease in the share of panels that end up needing to be recycled. (For perspective, the country generated more than 250 million metric tons of municipal solid waste in 2018, the most recent year available.)

Instead of being recycled, many of those decades-old panels will still be operating, Mirletz said.

But 2050 is a long way off, so let’s talk about what happens closer to today. The paper’s findings also show that the wave of solar panel waste isn’t going to hit as soon as researchers previously expected. Instead of arriving in about 2030, it’s more likely to be about 2040. This gives the recycling industry more time to expand their operations and figure out ways to reduce costs.

Mirletz is finishing a Ph.D. at the Colorado School of Mines in a program that works with the National Renewable Energy Laboratory, a few miles away. Her co-authors include Silvana Ovaitt, an NREL researcher.

“We’re trying to look at our energy system more holistically,” Mirletz said. “It’s not just about producing energy, so that we can turn the lights on, but it’s also about making sure that the people and the systems in place along that entire supply chain—everything that it takes to do that, to turn the lights on—is not harming people.”

She is talking about the so-called “circular economy,” which places an emphasis on a continual reuse of materials and tries to reduce what ends up in landfills.

Applying these principles to solar power, she and her co-authors found that there wasn’t much research into the solar panel lifecycle that took into account recent advances in the efficiency and durability of panels.

“We wanted to push back a little bit on this scare of, ‘We’re gonna have (tens of millions) of metric tons of waste from PV. We’re all gonna die,’” she said. “PV” stands for photovoltaic, which is the process of converting sunlight to electricity in solar panels.

She’s kidding about fears that their detritus will contribute to our mortality, but this reflects the way that solar waste often gets talked about by opponents of solar projects, and the tone of a good share of media reporting on the subject.

The findings are based in part on a modeling tool developed by NREL, which uses recent reliability data to improve forecasts of how long solar panels will last in the field.

The results show that it may be better to use solar panels in existing arrays for as long as possible rather than replacing them when they reach an age that used to mean retirement. That way, newly manufactured panels can be used mostly in new projects.

There are a few caveats, including that solar technology is constantly changing and the improvements in electricity output don’t necessarily coincide with gains in durability, Mirletz said. So, this kind of analysis is going to need to be done continually as we move into an era in which solar power is rapidly expanding.

Also, there is disagreement among researchers about how much solar power is going to need to be built to get to net-zero carbon emissions, which is a key variable in projecting the amount of waste. This paper derives its estimate for solar deployment from data in the Solar Futures Study that the Department of Energy released last year. Other estimates are higher or lower.

But under just about every scenario, there is going to be much more solar power, and with it comes a need to figure out how to get the most out of this resource while also reducing the technology’s waste.

GOP Seizes on Voter Hesitancy to Attack EVs as Costly: With the midterm election just a few days away, many Republican candidates are vilifying a key component of President Joe Biden’s climate agenda: electric vehicles. The candidates are saying Democrats’ support for EVs will leave Americans broke, stranded on the road and even in the dark, as Hope Yen and Matthew Daly report for the Associated Press. Many of these attacks are not true. “There’s still lots of selling to do before EVs catch on with the American people,” said Jim Manley, a Democratic strategist and longtime staffer to the late Senate Majority Leader Harry Reid.

Biden Administration Selects First Two Zones for Offshore Wind Development in Gulf of Mexico: The U.S. Bureau of Ocean Energy Management has selected two areas for offshore wind development in the Gulf of Mexico, marking the start of wind energy development there. By the end of this decade, wind turbines could be in operation in a 174,000-acre area south of Lake Charles, Louisiana and a 508,000-acre area near Galveston, Texas, as Tristan Baurick reports for Nola.com. “These two wind energy areas represent exciting progress toward having the first offshore wind lease sale in the Gulf of Mexico, where there is a mature industry base and the knowhow to advance energy development in the Outer Continental Shelf,” said Amanda Lefton, the bureau’s director, in a statement.

The Country’s Biggest Electric Bus Microgrid Is Open for Business in Maryland: The transit agency in Montgomery County, Maryland envisions a self-sustaining island of power when the grid goes down and low-cost, self-generated energy when the grid is up. The Brookville Smart Energy Bus Depot, which just opened, uses a combination of electric buses, solar panels, backup batteries and microgrid control systems, as Jeff St. John reports for Canary Media. This is at least the third solar-powered transit bus charging depot in the country, following Antelope Valley Transit Authority in California and Vineyard Transit Authority on the Massachusetts island of Martha’s Vineyard.

Global Energy Report Says Pain at the Pump, High Energy Costs Could Create a Silver Lining for Climate and Security: The International Energy Agency flagship World Energy Outlook report says the blame for rising energy prices across the globe can be placed squarely on Russia for its invasion of Ukraine. But the energy crisis is leading the United States, Europe, China and India to put in place new approaches to energy that, over the long term, could lead to greater sustainability and stability, including more renewable energy, as my colleague James Bruggers reports for ICN. “Government responses around the world promise to make this a historic and definitive turning point towards a cleaner, more affordable and more secure energy system,” said IEA Executive Director Fatih Birol, in a statement.

The EV Battery Boom Is Here, With Manufacturers Investing Billions in Midwest Factories 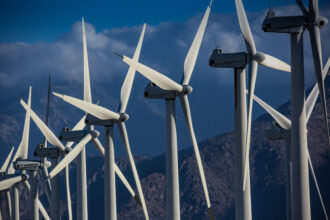 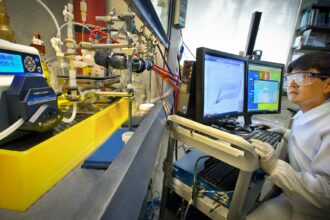