As Team Canada prepared to don red Lululemon parkas and march in the opening ceremony of the Winter Olympics in Beijing, activists visited the Canadian apparel company’s flagship store in Vancouver to give employees a medal made of coal rather than gold.

Members of the environmental advocacy group Stand.earth awarded a tongue-in-cheek “coal medal” on Wednesday to Lululemon Athletica, best known for its yoga gear, because the fast-growing apparel brand relies heavily on coal power to source, weave and dye its fabric and manufacture its clothing.

And while fashion brands have largely focused on reducing emissions from retail stores, warehouses and corporate headquarters, the vast majority of the apparel industry’s emissions come from further up their supply chains, where garment manufacturing in developing countries relies heavily on coal-fired energy to source raw materials and make clothing.

“The fashion industry needs a makeover,” said Elizabeth Sturcken, managing director of corporate partnerships for the Environmental Defense Fund. Sturcken added that the industry’s growing greenhouse gas emissions are on a collision course with international efforts to stave off the worst impacts of climate change.  “Without a series of changes in the very near future, the industry is set to over-emit [its] Paris Agreement goals two-fold by 2030. We have a massive challenge here in the next eight years.”

Stand.earth is calling on Lululemon, the official clothing supplier for Team Canada, to transition from coal to renewable energy to power the factories where the company’s apparel is made by 2030. Forty-eight percent of the electricity used by factories that make garments for Lululemon in Vietnam, Cambodia and China come from burning coal, with only 5 percent coming from renewable energy according to the Vancouver based advocacy organization.  Apparel made in China, including the red parkas that members of Team Canada are expected to wear during Friday’s opening ceremony, rely on coal for 64 percent of their electricity mix. By comparison, the U.S electric grid relies on coal for 19 percent of its power. Renewable energy sources provide 20 percent of the nation’s electricity, according to the U.S. Energy Information Administration.

Lululemon’s “brand is based on these values of wellbeing and sustainability and when you look more closely at the brand’s sustainability or climate efforts, you’ll quickly notice that they’ve taken very little steps to actually move away from fossil fuels and to tackle their emissions,” Muhannad Malas, a senior climate campaigner with Stand.earth, said.

Lululemon did not respond to a request from Inside Climate News for comment. However, the company has self-reported details on its emissions and sustainability efforts through financial reports and other public disclosures.

In 2020, Lululemon set a goal to power its operations with 100 percent renewable electricity by 2021 and to reduce the carbon intensity of the emissions from its supply chain by 60 percent by 2030.  But a carbon intensity reduction is not the same as an absolute reduction in emissions. If the volume of goods sold by the company increases, as it is projected to do, the amount of greenhouse gases it emits could go up rather than decrease, even if its total production had lower carbon intensity.

Lululemon met its 2021, 100 percent renewable electricity goal.  However, that goal only affected emissions tied to facilities directly owned by the company—“scope 1” and “scope 2” emissions—which account for just 5 percent of Lululemon’s total emissions.

Like most apparel companies, Lululemon outsources the manufacturing of its apparel, as well as the production of the raw materials that go into its clothing, to other companies.

Ninety-five percent of Lululemon’s emissions came from these indirect, or “scope 3,” sources—the supply chain made up of manufacturing facilities in 14 countries and raw material suppliers in 18. This is according to a detailed accounting of company-wide emissions that Lululemon provided in its 2021 Climate Change Report published by CDP (formerly the Carbon Disclosure Project), a non-profit organization that works with companies to report their environmental impact.

The CDP report notes that Lululemon’s scope 1 and scope 2 emissions reduction goals are in line with the Paris Agreement’s target to limit warming to 1.5 degrees Celsius. The goals were independently verified through the Science Based Targets initiative, a collaboration between CDP, the United Nations Global Compact, World Resources Institute and the World Wide Fund for Nature.

However, Lululemon’s efforts to reduce its scope 3 emissions, which make up the lion’s share of the company’s climate pollution, are not aligned with efforts to limit warming to 1.5 C, but rather with a less ambitious target of 2 C.

“That’s problematic because for a brand like Lululemon, like all other fashion brands, it’s the scope three emissions target that matters most,” Malas said.

Climate scientists say limiting global warming to 1.5 C above pre-industrial levels is crucial to staving off the worst impacts of climate change, which would be far worse under 2 C of warming.

Lululemon’s emissions will roughly triple between now and 2030 rather than decline by the amount needed to meet a 1.5 C aligned target, according to a recent analysis by Stand.earth. The group’s assessment was based on the company’s recently reported and anticipated growth in both sales and emissions.

To curb emissions, Lululemon must work with its suppliers to install energy efficiency and renewable electricity projects, or to source clean energy elsewhere, Malas said.

Company officials appear to be considering such measures.

In the company’s 2021 Climate Change report published by CDP, Lululemon said it plans to partner with suppliers “to mitigate climate-related issues, decarbonize our supply chain and meet our 2030 science-based targets, collaborating on energy efficiency initiatives and low carbon or renewable energy opportunities.”

“This will help us minimize exposure to risks including carbon taxes, increased fossil fuel costs, reputational risks, and consumer preferences,” the company said.

However, the company’s most recent annual financial report filed with the U.S. Securities and Exchange Commission noted that efforts to reduce greenhouse gas emissions could negatively impact the company’s bottom line.

“If we choose to take voluntary steps to reduce or mitigate our impact on climate change, we may experience increases in energy, production, transportation, and raw material costs, capital expenditures, or insurance premiums and deductibles, which could adversely impact our operations,” the January 2021 report stated.

Lululemon is pursuing cleaner electricity through renewable energy credits or power purchase agreements for its North American operations but hasn’t made similar strides in Asia, where its clothing is manufactured. However, in 2020 the company partnered with one of its suppliers, a fabric mill in Taiwan, to test a more energy-efficient method of dyeing nylon, the primary fabric used in the company’s apparel. The “solution dye” method used 40 percent less energy and 75 percent less water, the company reported in its 2021 Climate Change report published by CDP.

Stand.earth’s call for Lululemon to increase its use of renewables aligns with what others have been calling for from the fashion industry in recent years.

“The most effective way the apparel and footwear industries can achieve an ambitious industry-wide emission reduction is to focus on renewable energy and energy efficiency across their supply chains,” a 2018 report by Quantis, a sustainability consulting firm concluded.

The study also pointed a finger at U.S. consumers who purchase an average of 83 pounds of clothing per person each year, more than shoppers in any other country. Purchases by U.S. consumers include 7 pairs of shoes per person, more than twice the global average and more than three times the annual footwear purchased by European consumers.

Philipp Meister, global fashion and sporting goods lead for Quantis, said he has seen a lot of promising pledges to reduce emissions in recent years, but companies now need to move from words to deeds.

“Honestly speaking, what is still missing are more tangible actions to actually then at the end of the day, reduce the impact,” Meister said.

One challenge the industry faces is that by not owning the mills, factories and other manufacturing facilities that make the actual garments, brands have less leverage on manufacturers’ investments in renewable energy, Meister said.

In cases where manufacturers produce apparel for a number of competing brands, individual apparel companies like Lululemon may have little incentive to help fund renewable energy investments when competitors using the same suppliers do not pitch in.

One way to get at the issue of which apparel brand should fund a manufacturer’s renewable energy efforts is an industry-wide collaboration in which apparel companies work together to foster clean energy developments in developing countries.

In November, more than two dozen companies including New Balance, REI, Gap, and H&M jointly called on Vietnam to deploy more renewable energy, and make it easier for the brands and other private companies to engage in Direct Power Purchase Agreements for renewable energy in the country.

Whether it is companies working individually or collectively, the changes will have to come quickly if the industry seeks to remain within its Paris climate agreement targets.

“The fashion industry is one of the biggest contributors to climate emissions worldwide, and that contribution is growing as the industry continues to grow,” Malas said. ”Unless emissions drop significantly, and specifically unless we meet the Paris Agreement targets, many cities including Vancouver, which is where Lululemon is headquartered, may not be able to host the Winter Olympics in the future.” 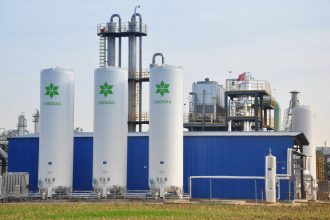 A Chinese Chemical Company Captures and Reuses 6,000 Tons of a Super-Polluting Greenhouse Gas