The scramble to cool the Fukushima Daiichi nuclear complex with seawater in the aftermath of Japan’s disastrous accident put a spotlight on just how much cold water an atomic reactor needs to function — and not just in a crisis.

All existing nuclear plants use vast amounts of water as a coolant. But in recent years — often far from the public eye — hot river and lake temperatures have forced power plants worldwide to decrease generating capacity.

Experts say the problem is only getting worse as climate change triggers prolonged heat waves, prompting calls for changes in siting processes.

“As a long-range strategy, [the industry] might change where we site new plants to have better use of water resources,” Gary Vine, an independent consultant, told SolveClimate News. Vine has worked in the nuclear industry for decades and is a former employee of Electric Power Research Institute, a utility group.

There is also hope that new technologies will help mitigate the problem.

The U.S. Department of Energy is part of an international team working to design the next generation of nuclear plants — some of which will use less water than traditional plants. But the project faces numerous challenges such as cost and implementation barriers, and the DOE anticipates that the generation IV reactors will not be commercially available for at least two decades.

In the meantime, the scope of the problem is still not precisely known.

Preliminary data from the Union of Concerned Scientists (UCS), an environmental and nuclear watchdog group based in Cambridge, Mass., shows that seven nuclear units at five facilities had to reduce generating capacity due to warm waters on at least 15 occasions between May and September 2010. The plants were in New Jersey, Pennsylvania, Illinois and Georgia. While such incidents didn’t affect plant safety, they posed economic risk and decreased power availability.

In one case, which did not appear in the UCS database, the Tennessee Valley Authority’s Browns Ferry station near Athens, Ala., lost over $50 million dollars when it was forced to run at half capacity for eight weeks last summer, passing the price surge to customers.

During a blistering heat wave in Europe in 2003, France cut 4,000 megawatts of nuclear power — the equivalent of shutting down four power plants — at a time when demand for air conditioning was at its highest.

Of the 104 nuclear plants in the U.S., over 30, or about one-third, are located in the Southeast where they are especially vulnerable to heat waves. In part because the region’s wind energy resource lags behind much of the nation, nuclear is seen as an attractive emissions-free alternative.

Nuclear accounts for about a quarter of the region’s electrical generation, compared with 20 percent for the nation as a whole. As of March, the Nuclear Regulatory Commission had received 16 license applications for building new nuclear units in the Southeast. The projects closest to construction are units 3 and 4 of Southern Company’s Vogtle plant in Burke County, Georgia.

Sara Barczak, a program director for the Knoxville, Tenn.-based Southern Alliance for Clean Energy, said climate effects must figure into utilities’ decisions to build new nuclear facilities, especially since it can cost up to $10 billion per reactor and each is designed to last for 60 years.

Climate change studies published in research journals such as Science and the Journal of Climate project longer and more intense heat waves over the next century worldwide, adding constraints to water-intensive power systems.

According to the U.S. Geological Survey, thermoelectric generation in the U.S. from coal, natural gas and nuclear withdraws more freshwater per year than the entire agricultural sector. Overall, nuclear plants consume up to 25 percent more water than fossil fuel plants.

David Lochbaum, director of the Nuclear Safety Project at UCS, said regulators should be more forward-thinking in siting decisions.

When deciding where to build new reactors, officials “look backwards for [records of] earthquakes and rainfall patterns but never look forward,” he said. “It’s always struck me as ironic that the industry touts nuclear as part of the solution for climate change but they don’t consider climate change” in their planning.

Ray Golden, a spokesperson for TVA, said the last time the utility licensed a nuclear plant was in the 1980s, at a time when climate science was “less” available.

TVA has no plans to expand its nuclear fleet beyond its three existing plants. But if it did, Golden said, it would “be looking at all scientific evidence as part of the environmental review, including the potential that global warming might impact river temperatures in the future.”

Boomhower said the utility has never had to reduce nuclear capacity because of water temperatures. SCE&G currently gets 19 percent of its electricity from its single nuclear plant near Jenkinsville, South Carolina, some 25 miles northwest of Columbia. The two proposed units will be built at the same site.

Southern Co. did not respond to requests for comment by deadline.

All thermoelectric plants operate on the same principle. Water gets heated by a fuel source — coal, natural gas or nuclear reactions — to create steam that drives a turbine to generate electricity.

In a nutshell, nuclear power is just “a glorified way to boil water,” said Barczak.

After steam is created, it must be condensed back into water and recycled through the nuclear plant to be boiled again. In a process known in the industry as “once-through” cooling, the plant pumps in cold water from a river, lake or ocean. This water pulls heat from the steam, and then it is returned to where it came from, 10 to 20 degrees warmer.

Overheating occurs during the summer months, when outdoor water temperatures are already high. Environmental regulations prevent power plants from discharging the heated water back into the river when temperatures reach a certain point and could harm fish. When that happens, nuclear operators have to decrease their generating capacity.

These regulations vary from state to state. In Alabama, for instance, once the river hits 90 degrees Fahrenheit, power plants cannot discharge any water that’s warmer than the river’s ambient temperature, TVA’s Golden said.

Fossil fuel plants are also vulnerable to such heat impacts, though nuclear is more water-hungry. In once-through cooling systems, nuclear reactors withdraw 25 to 60 gallons of water for every kilowatt-hour of electricity, while coal uses 20 to 50 gallons per kilowatt-hour.

TVA spokesperson Barbara Martocci said the utility must derate some of their coal plants every year. “It’s unusual if it doesn’t happen.” Sometimes the utility has enough reserve power to make up for the lost capacity; in other instances they have to buy power on the open market.

When a nuclear plant reduces capacity, it tends to grab more headlines than similar shutdowns at a coal-fired power plant, explained Vine, the independent consultant. One reason is that nuclear plants are larger: In the U.S., each unit generates about 1,000 megawatts of electricity, at least twice as much as individual fossil plants.

Nearly 80 percent of the nation’s nuclear facilities are sited inland, relying on rivers and lakes, which heat up more quickly than seawater.

However, operators of these facilities have another option for cooling steam: Instead of cycling cold water through the plant, they can build cooling towers that use air to remove the heat. (Includes correction, 05/04/2011)

Plants with cooling towers use 90 percent less water than once-through cooling, said Lochbaum of UCS. But they ultimately consume more.

In once-through cooling, power plants return the water they use to the lake or river. When cooling towers are used, water is evaporated and lost to the atmosphere, so additional water must be brought in and boiled for steam.

For him, the “megatrend” of siting nuclear plants inland is unfortunate. Only 22 nuclear complexes are located next to an ocean, estuary or tidal river. The top reasons are the high cost of coastal real estate iand stringent environmental regulations for saltwater ecosystems, Vine said.

High-Tech Fixes in the Works

Technologies on the horizon could mitigate future climate effects.

The power company Dominion, which operates two nuclear units near Virginia’s Lake Anna in Louisa County, plans to add a third unit at the same location. The proposed plant would include a hybrid cooling tower capable of removing heat without evaporating water.

The tower incorporates wet and dry cooling technology in a way that’s been used on nuclear plants in Europe but not in the U.S., said Richard Zuercher, a spokesperson for Dominion.

Zuercher emphasized, however, that the tower’s design isn’t final and nothing will be decided for sure until Dominion completes the licensing process in 2013 or 2014.

Looking far into the future, nuclear engineers are designing new reactors that use less water for cooling. In some cases, hot gas will be used in place of steam to drive the turbines. Another design uses more efficient condensers that require less cooling water. However, these reactors won’t be ready until between 2030 and 2040, experts say.

TVA isn’t waiting for that day to come. The utility has a three-year plan to address water issues, said Golden. Unlike most nuclear plants, Browns Ferry has a unique hybrid design. The reactor uses once-through cooling with additional helper towers that cool the water before it’s discharged into the river.

TVA will refurbish the station’s six existing towers and build a new one by 2013. Golden called the $160 million dollar project an “adaptation plan” to help TVA avoid a repeat of summer 2010. 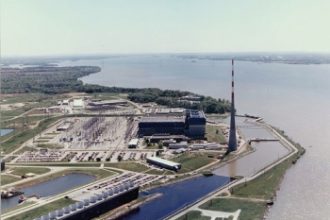