The Solyndra debacle is proving an irresistible target for Republicans and their allies—especially as the election cycle gets underway.

The conservative Americans for Prosperity, a group established and largely financed by oil industry interests, kicked off the first Solyndra-related national ad blitz this week. The campaign accuses Pres. Obama of cronyism for his involvement in granting the now-bankrupt California solar firm a $535 million federal loan guarantee.

The group will spend $2.4 million on TV spots over two weeks in key swing states like Florida, Michigan, New Mexico and Virginia. The first advert charges Obama with “risking billions of taxpayer dollars to help his political donors” and “his friends at Solyndra.”

Still hungry for hard proof of such Obama wrongdoing, the House Energy and Commerce Committee voted along partisan lines on Thursday to subpoena internal White House communications about Solyndra.

The White House has already released 85,000 pages of documents. Committee chairman Joe Barton (R-Tex.) told the New York Times  the extra materials are needed to confirm his party’s hunch that White House officials had “extensive contact” with a campaign donor who was also a Solyndra investor.

Rep. Diana DeGette (D-Colo.), the ranking Democrat on the panel, called the vote a “political sideshow” and “an act of irresponsible partisanship,” according to media reports.

Beacon is the second DOE-backed green firm to go belly-up, and it’s blaming the Solyndra fiasco for its crash. “Frankly, your honor, it’s been a storm that the company has not been able to withstand without the protection of this court,” the company’s lawyer told a judge during a Wednesday bankruptcy hearing.

Last year the firm received a $43 million loan guarantee to help build a 20-megawatt storage plant in New York. The facility was designed to smooth intermittent flows of wind and solar power on the grid.

Beacon was seeking $10 million in private financing to stay afloat. But its ability to tap the credit market “evaporated” once Solyndra came under scrutiny, the lawyer said. That, plus restrictive financing terms mandated by the DOE and its recent delisting from the Nasdaq stock market, left it struggling, according to its bankruptcy filings.

Obama’s fiercest critics were quick to link Beacon with Solyndra and target DOE. “This latest failure is a sharp reminder that DOE has fallen well short of delivering the stimulus jobs,” said Rep. Cliff Stearns (R-Fla.), who heads the House’s Solyndra probe.

Beacon’s chief executive Bill Capp has said his firm is no Solyndra. (For one, its plant is still operating and earning revenues, unlike Solyndra’s shuttered factory, he said.)

Americans from Both Parties Support a Clean Economy; V.C.’s Ante Up

According to a Tuesday report from the Solar Energy Industries Association, a trade group, and Kelton Research, a polling firm, nine in 10 Americans surveyed said it is important for the United States to develop and use solar energy. (Some 80 percent of Republicans and 94 percent of Democrats said they supported the renewable energy source, it found.)

According to a separate poll from the nonpartisan Civil Society Institute, three in four Americans said they want the U.S. to make the investments needed to be a global green energy leader.

The federal government’s clean energy financing is caught in the Solyndra fallout and the long-running budget feud. But new figures released on Tuesday from Ernst & Young  reveal that venture capitalists are once again anteing up.

Investments in U.S. cleantech companies jumped 73 percent to $1.1 billion in the third quarter of this year, compared to the same period in 2010. Energy storage companies were the big winners, landing just under 40 percent of the total sum. Energy generation firms snagged $255.1 million, with 77 percent going to solar energy.

Solar Subsidies Get the Axe in the UK, Ontario; Chinese Giants Scale Back

Perhaps, but for the world’s global solar panel suppliers, the tough economic climate got tougher this week.

Britain’s energy ministry on Monday proposed slashing subsidies for small-scale solar energy systems in half, in order to save the UK more than $1 billion annually during next few years. The country’s solar industry has contested the plan, claiming the cuts would destroy 25,000 jobs in the sector, Reuters reported Tuesday.

Ontario is also likely to scale back its solar feed-in-tariff after its energy ministry launched a review of the subsidy program on Wednesday. Poll-conscious officials said that while the tariff has helped to spur a sizeable solar industry in the Canadian province, higher electricity bills have angered ratepayers.

The cutbacks mean solar panel manufacturers could lose even more business. Many firms have struggled to remain profitable as diminishing subsidies in Germany and Italy have caused demand to plunge in key solar markets.

Even highly subsidized Chinese solar companies are cutting production goals for 2012. Chinese giants, including JA Solar and Suntech Power Holdings, said on Wednesday they would idle some factory equipment and dramatically slow down the pace of expansion, claiming current inventories can meet shrinking demand.

Warning signs of another shakeout in the cleantech sector are popping up, according to an E&E report.

Currently, worldwide supply of lithium-ion batteries for electric vehicles far exceeds demand for the low-carbon cars. Some say the glut could soon spur a shakeout similar to the one wreaking havoc on the solar industry, with less competitive firms getting squeezed out of the market.

Smaller firms like DOE-backed Ener1, for instance, are likely to face significant competition from bigger Japanese and South Korean manufacturers, Bloomberg reported Friday. New York-based Ener1, one of 30 battery manufacturers to win stimulus grants, ran into financial trouble last week when its shares were delisted from Nasdaq. DOE said this week it was “closely monitoring the status” of the firm.

China is expected to ignite demand for LEDs and other energy-efficient light bulbs after announcing on Friday that it will phase out older, energy-guzzling bulbs within five years, beginning next October.

The government’s environmental protection department said lighting accounts for 12 percent of electricity use in China. Last year 3.85 billion incandescents were made in China and 1.07 billion were sold domestically.

Suspicion over China’s clean energy sector is likely to heighten after a U.S. intelligence report released Thursday accused China of being the world’s “most active and persistent” economic spy. Clean energy R&D made the list of prized industrial areas that Chinese (plus Russian) spies are allegedly pilfering.

U.S. wind developers are expected to lobby hard for a bipartisan House bill introduced this week to extend tax incentives that expire at the end of next year. The proposed production tax credit would give developers of renewable energy projects 2.3 cents for every kilowatt-hour of power produced through 2016. 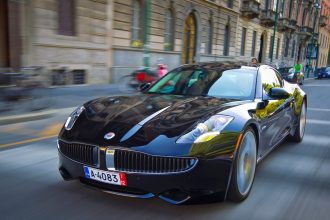 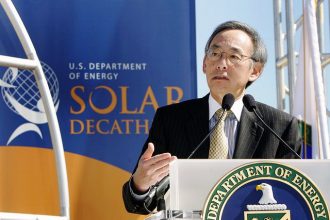