Some of the nation’s driest, drought-plagued places have quickly become its busiest hot spots of drilling for shale gas and oil, especially in Texas, Colorado and California.

It’s a dust-bowl-sized problem likely to become worse, according to a study released Wednesday by the nonprofit sustainability advocacy group firm Ceres. Fracking, the controversial drilling technique, is consuming billions of gallons of water each year in states where water is increasingly scarce. The report warns that investors need to demand information about how energy companies are managing this problem or risk their investment portfolios being clobbered.

Put simply, Ceres is saying there probably isn’t enough fracking water where fracking most wants to happen. And eventually, there will be a price to pay.

The study found that nearly half the wells being hydraulically fractured in the U.S. since 2011, a time of explosive growth in shale energy drilling, were in regions with high or extremely high water stress. More than half were in places suffering drought. Modern-day fracking extracts gas or oil locked a mile or more underground by injecting pressurized water, sand and a brew of chemicals into a long horizontal vein of shale. On average, the Ceres study found, a single gas fracking site consumed 1.9 million gallons of water per year—enough water, based on EPA estimates, to supply the yearly needs of 13 families of four people. A fracking site can produce for as long as four decades, according to industry literature.

In Colorado and California nearly all the fracking is occurring in areas of high or extremely high water stress—96 percent for California’s Monterey shale play and 97 percent for Colorado’s Niobrara formation north of Denver. Ceres defined “extremely high water stress” as an area where 80 percent of available surface and groundwater is already allocated for municipal, industrial and agricultural uses.

“We worry that groundwater is not stewarded well,” said Monika Freyman, the report’s author and analyst. “We think it’s a material risk from an investor point of view.”

Overall, 36 percent of the 39,294 hydraulically fractured wells in Ceres’ study, covering the period from 2011 through May 2013, overlaid “regions experiencing groundwater depletion.”

“In those dry regions, we are already relying on groundwater,” Famiglietti said, and the rise of hydro-fracking creates new demands that argue for more careful allocation.

Amada Brock, CEO of Water Standard, a Houston-based water treatment firm, said Texas “is Ground Zero in the debate.” She said “groundwater levels are depleting rapidly” in areas of intense fracking there. “There’s no denying that it has had a significant impact.”

Ceres is warning investors that drilling and service companies need to disclose more information about their water supplies. In dozens of dryish counties where fracking is booming, water use is at or approaching more than a billion gallons a year. The thirst for water is so great that one company, Apache, is recycling all its fracking water in the west Texas Permian Basin area. One company in the Marcellus region, Chesapeake, recycles nearly all its fracking water.

How well local regulators manage the drilling industry’s demand for water runs the gamut, Freyman said. Some officials are well prepared and adept, often by having good planning and regulations in effect for growth and development. Some are caught off guard. In Pennsylvania’s Marcellus region, Freyman noted, state water managers watch demand and on occasion order a halt to hydro-fracking. The industry complies. Aquifers and water bodies replenish. Then work resumes.

In other places, it’s the Wild, Wild West for water. In Texas, groundwater regulation is minimal.

The study portends future collisions between the drilling industry and people who need scarce water for homes, farms, businesses and irrigation. But the picture is a complicated mosaic, the report said. And the severity of the problem depends heavily on local conditions and how governments and drillers behave.

Water use by shale drilling and mining generally is a fraction of water use nationwide—a mere one percent or so. The big user generally is agriculture, which consumes more than a third. People account for about an eighth. But fracking becomes a big factor locally when it competes in a dry landscape, because the process tends to foul and remove water from the earth’s natural cycle of replenishment.

Ceres is a non-profit investor analysis firm that believes environmentally conscious behavior is good business for investment. It acquired the elaborate and up-to-date data for its study from the World Resources Institute, an environmental data collector, and from FracFocus.org, a website where drillers file information. The engineering firm PacWest assisted Ceres in the study. Much of the underlying data comes from the U.S. Geological Survey.

FracFocus has grown to become an all-things-fracking clearinghouse for disclosure, but the Ceres study found that the website’s information is incomplete. Ten states–including Texas, Colorado, California and Pennsylvania–require disclosure to FracFocus, but in other states disclosure to FracFocus is voluntary even if some public disclosure is required. That means stats from the Ceres report understate the water issue nationally.

Ceres says companies should give investors a breakdown of non-freshwater and non-potable supplies in use and how much water returns to the surface post-fracking. It also suggests that energy companies tell what percentage of their future growth is dependent on areas of high water stress.

“We think it’s good business practice,” said Freyman, the report’s author. She points out that drillers who plan and recycle and share intelligent water systems, rather than trucking away waste water in a hurry to drill, “can save from 10 to 40 percent” on their costs.

The Ceres report breaks out several areas of intense water concern and has an excellent catalog the public can use to identify active hydro-fracking companies and their respective volumes of work nationally or locally. The Ceres report is on the firm’s website in its report section.

Ceres singled out four areas of growing concern for water supply stress. The Eagle Ford shale region northwest of San Antonio, Texas, “faces some of the biggest water challenges,” the report said, with total water use by fracking the highest in the nation at 19.2 billion gallons of water over the study’s 29-month period. Local aquifers in three counties there have declined 100 to 300 feet, Ceres observed.

The vast Permian Basin shale stretching from New Mexico across the Texas panhandle and into Oklahoma, where more than 70 percent of water wells are in high stress aquifers, is the home of 9,300 wells with water use expected to double by 2020. Two Rocky Mountain counties north of Denver have become home to thousands of fracking sites and this region expects fracking water use to double by 2015 to six billion gallons, more than double what the city of Boulder uses in one year.

Kern County in California is the focal point of that state’s still nascent fracking business, but drilling is expected to grow enormously in other areas that face agricultural water needs and growing populations.

Interestingly, the study’s rich mapping overlays reveal large regions where vast untapped shale resources lie waiting, but would theoretically impose little or manageable stress on local water supplies, such as the Appalachian South, as well as many swaths of untapped Marcellus shale in Ohio, Pennsylvania and the western tier of New York.

The Ceres report singled out Andarko Petroleum as one company facing especially “high water risk exposure,” but also named Apache, Encana and Pioneer as facing risk. The largest user of water is Chesapeake Energy, the biggest hydro-fracker. Halliburton, Schlumberger and Baker Hughes, familiar names as big service providers to the energy industry, together have their footprint in about half the nation’s fracking water meter. 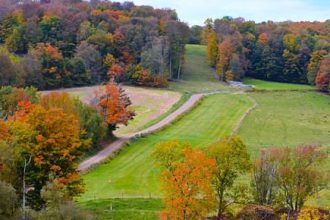 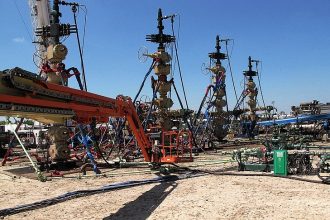