Like Jean Valjean in the sewers, the White House is racing to elude the authorities of Paris, the city that gave its name to the binding 2015 treaty enlisting all nations to address the world’s climate change crisis.

Put simply, President Donald Trump faces a choice between two routes—one marked rejection, the other revision—as he seeks to fulfill his campaign pledge to “cancel” the treaty.

That he has this choice stems from two competing impulses that shaped the text of the Paris climate agreement as nations sought to make it both effective and flexible.

The delicate balance they struck was to make the document binding but not compulsory, ambitious but not rigid. Now, that compromise is being manipulated by two factions, the rejectionists and the revisionists, inside the White House.

Does the agreement attach Houdini-proof manacles on countries? Leave. Or is it essentially voluntary, inviting all but entrapping none? Stay.

How Trump views it may help him decide whether he needs what Secretary of State Rex Tillerson dubbed “a seat at the table’’ in order to satisfy the president’s America-first instincts.

Here are questions and answers about the unfolding debate, based on interviews with insiders and well-informed outsiders.

The big question is how best to wriggle out of Washington’s commitment to cut U.S. emissions up to 28 percent by 2025, a goal that can’t be met under Trump’s energy policies. The target is precise, but voluntary; each nation sets its own goal, and while there are provisions for holding each other accountable, there is no recourse against anyone who falls short. The same goes for other responsibilities, such as providing financial aid for poor nations or payments for climate damages suffered by vulnerable countries.

What Does the Treaty Actually Say?

The treaty’s text about abruptly changing a country’s pledge seems as clear as the arrow sign on a one-way street.

“A party may at any time adjust its existing nationally determined contribution [NDC] with a view to enhancing its level of ambition,” a key clause says. This was colloquially known as a “no-backsliding” provision.

But unlike on a rue à sens unique, there’s actually no law against throwing the car into reverse—the gendarmes might blow a whistle, but they won’t write a ticket.

Why Was the Treaty Designed This Way?

To keep hope alive for eventual deep emissions cuts, all nations had to join, even if their up-front commitments fell short. But all along, many said that if their pledges were binding, they would aim low. So negotiators let each country declare its own pledge. Over time, everybody was to ratchet up their performance, with rich countries in the lead. The no-backsliding language didn’t have an explicit escape clause—but it was not ironclad.

Who are the Internal Factions?

Secretary of State Rex Tillerson, Energy Secretary Rick Perry and some staff advisers, favor staying in. So, reportedly, do Ivanka Trump and her husband, Jared Kushner.

EPA Administrator Scott Pruitt and White House strategic adviser Steve Bannon are most adamant in opposition to the treaty. They are supported by the White House counsel, Don McGahn, who was Trump’s trusted campaign lawyer.

How Are Outsiders Lining Up?

They are split, too. The conservative Competitive Enterprise Institute has played a leading role lobbying for an exit. Observers say the group has the support of influential conservative donors, including billionaire Robert Mercer, who was Trump’s largest backer. Other hardliners include Murray Energy’s chief executive Robert Murray and his coal company’s lobbyist, Andrew Wheeler, who helped enlist Pruitt to talk to the National Mining Association before it joined the rejection lobby.

But there are many companies that favor staying in Paris, including those in the fossil fuel industry. Some support sticking to the existing pledges. Others stress the flexibility of the Paris framework, notably including Tillerson’s former employer, ExxonMobil.

What Are the Competing Arguments?

So far, the legal arguments have been spelled out in the most detail by outsiders.

Congressman Kevin Cramer (R-N.D.), an influential Trump adviser who helped write his America First energy policy, sent a letter to the White House urging it to stay in the treaty but revise its pledge.

When Perry, the energy secretary, endorsed the view, the revision faction seemed ascendant. “The U.S. should present a new pledge that does no harm to our economy,” Cramer said. Said Perry, “We need to renegotiate it.”

But Pruitt, the EPA administrator who as Oklahoma’s attorney general was a leading litigator against the agency’s rules, took the view that the treaty stood in the way of his rollback. A white paper from the Competitive Enterprise Institute laid out this rationale, saying that “the United States cannot comply with the Paris Agreement and pursue a pro-growth energy agenda.” The authors, Christopher Horner and Marlo Lewis, both seasoned campaigners against climate action, said that “failure to withdraw from the agreement would entrench a constitutionally damaging precedent, set President Trump’s domestic and foreign policies in conflict, and ensure decades of diplomatic blowback.”

Is This Really About the Clean Power Plan?

Yes. Trump is committed to killing the Clean Power Plan, which strongly discourages coal-fired electricity. If he succeeds, the U.S. would have to abandon its Paris pledge. Those who feel most strongly about upending the CPP say that effort would be jeopardized if the U.S. stays in the treaty.

But there are also implications for Trump’s entire economic agenda. The treaty’s fundamental aim is to end carbon dioxide emissions, and that’s incompatible with Trump’s basic energy and economic plan, which heavily favors fossil fuels. Tillerson, Pruitt and the whole team agree that no matter what, Paris must not undermine their broad economic program.

What Do Pro-Paris Forces Have to Say?

Treaty advocates who devoted years to crafting it find themselves in an uncomfortable bind.

Todd Stern, Obama’s leading negotiator, said: “Onward and upward—that’s the whole thrust of the agreement.” But he confirmed that the Paris negotiators made a “conscious” decision not to lock the doors.

“My preferred option, and the right option, is for the U.S. to stay in, and that we keep to our target,” Stern said. “I am quite confident that my option is not on the table.”

Susan Biniaz, a longtime former State Department lawyer, concurred. “While a downward revision is liable to draw criticism, it is a legally available option under the Paris Agreement,” she wrote in a memo for the  Center for Climate and Energy Solutions, or C2ES, a pro-treaty think tank.

Even Scott Segal, a lawyer and lobbyist who represents a range of energy companies, agreed that the legal argument offered by the rejectionists is weak. “I know of no court that would find it persuasive,” he said in an email. In a legal analysis, he wrote, “The Paris Agreement may create a rhetorical environment, even a powerful one, favorably disposed to these regulatory structures, but it does not require them.” (His partner at Bracewell LLP, Jeff Holmstead, is among the lawyers seeking to overturn the CPP. )

“This is not a legal issue,” said Paul Bodnar, a former energy and climate advisor in the Obama White House. “They should have the courage to have this debate on political grounds, rather than through the veil of obfuscation of a legal issue.”

The European Union’s climate action and energy commissioner, Miguel Arias Cañete, told the Financial Times this week that the Paris agreement was designed in a way that offered countries latitude, and his hope was that the United States would stay in. “There is room for a new U.S. administration to chart its own path,” he said.

What’s the Rush to Settle This?

Trump is under pressure to decide fairly quickly between these two strategies. Next week, UN negotiators are meeting once again in Bonn, and the subject will be on the agenda again at a Group of 7 summit later this month. Every fall, there is an all-hands negotiating session in the climate talks, and in November, at the meeting in Bonn but with Fiji holding the gavel, formal rules are to be set, carrying the UN process forward. 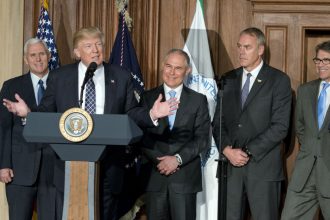 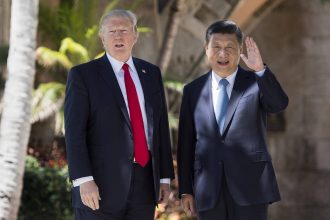