Secretary of State Hillary Clinton assured Canada’s foreign minister on Thursday the United States was on track to decide on TransCanada Corp’s bid for a $7 billion cross-border pipeline by the end of the year but gave no hint which way the decision would go.

Clinton met with Canadian Foreign Minister John Baird, who said he told her the Keystone project was “tremendously important to the future prosperity of the Canadian economy.”

“We are leaving no stone unturned in this process and we expect to make a decision on the permit before the end of this year,” Clinton told reporters in a joint appearance with Baird after their meeting.

Keystone XL, which would take petroleum from Canada’s oil sands to refineries in Texas, faces opposition from environmental groups and some U.S. politicians who say it would bolster more oil sands development, increasing greenhouse gas emissions and raise the risk of oil spills in the central U.S. states, site of a massive aquifer.

The State Department has said last week it will issue a final environmental assessment on the project in August and then government agencies will have 90 days to comment on it before a final decision is made.

Clinton said the State Department was reviewing “hundreds of thousands of comments” received during the public comment period and also would hold public meetings in each of the six U.S. states the 1,700-mile pipeline would cross.

“We’ve been clear from the beginning that the safety of the pipeline is one of our highest priorities,” Clinton said, adding that it was important to ensure “that we have full understanding of all of the consequences.”

Clinton said U.S. officials also had worked with TransCanada to develop a set of conditions beyond those required by law “to ensure that if the permit is issued the project will be as safe as it could possibly be.”

Baird said he had a “good discussion” with Clinton on the Keystone issue, and underscored its economic importance for Canada, a close U.S. ally.

“It is a very important project, not just for our government but I think for Canadians and the future of the Canadian economy,” he said.

Some U.S. lawmakers have pushed for an earlier decision on the Keystone XL project, saying it could be an important contribution to U.S. energy security by ensuring supplies from a friendly neighbor.

But the project, which requires final approval from the State Department because it crosses the Canada-U.S. border, has run into stiff opposition from green groups concerned about the environmental impacts of the pipeline 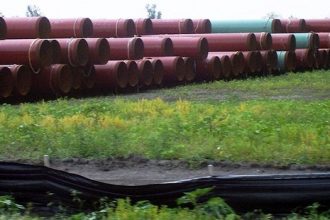