UPDATE: Dec. 5, 2016: Additional canceled projects have been added to the list of shelved fossil fuel infrastructure plans. These include Shell Puget Sound Refinery’s expansion and Targa’s oil terminal. The Oregon LNG project and pipeline, which had been rejected by local authorities, have also been canceled.

The Dakota Access pipeline, which has been in flux, is currently delayed. The U.S. Army Corps of Engineers denied a permit for the pipeline to cross Lake Oahe near the Standing Rock Sioux Reservation, pending a review of possible new routes and a more thorough environmental impact assessment.

Previously delayed Valero and Phillips 66 oil-by-rail projects have since been rejected by local officials. An additional project, the Oakland Bulk and Oversized Terminal, was effectively rejected when city officials passed a ban on all new coal infrastructure. Also added to the list is the delayed Contanda Gray Harbor Terminal.

President-elect Donald Trump has promised to reverse this trend and embrace more fossil fuel production. He has said he plans to revive TransCanada’s Keystone XL pipeline, which President Obama had rejected, but significant hurdles remain in doing so.

May 6, 2016: Six months after the Obama administration rejected the Keystone XL pipeline, at least 24 other proposed energy projects—mines, pipelines, plants, related rail projects and export terminals—have been canceled, rejected or delayed, according to research compiled and mapped by InsideClimate News.

Sustained grassroots resistance and public opposition have played a role in at least some of these decisions; other influential factors include unfavorable economic conditions such as low oil prices, as well as governments’ environmental concerns and project siting issues.

Proposed in 2008, the Keystone XL was originally slated to transport Canadian oil sands crude to Gulf Coast refineries. Federal regulators rejected the project for its potential climate impact and minimal economic benefits—and activists hailed the decision as a victory for their years of action against the project.

Since then, the Federal Energy Regulatory Commission rejected two project applications—for the Oregon-based Jordan Cove LNG project and Pacific Connector Pipeline—and delayed the decisions on two other facilities. For six of the projects, the bids or key permits were rejected by either a federal panel or state or local officials. Companies chose to cancel seven other projects, including Arch Coal’s abandoning its planned Otter Creek coal mine in Montana. The remaining facilities are delayed.

According to Tom Sanzillo, director of finance for the Institute for Energy Economics and Financial Analysis (IEEFA), what’s driving the coal decisions is straightforward: No one is willing to financially support these projects anymore.

So far this year, the nation’s two top coal companies, Peabody Coal and Arch Coal, announced bankruptcy. “The bankruptcies have just rocked the industry,” said Sanzillo, who cited a roster of investors who are “walking away” from coal: bankers, equity markets, venture capitalists and hedge funds.

For the oil and gas industries, it’s more complicated. According to Sanzillo, “there should be a concern that the utilities are building too many pipelines and the [regulators] should be concerned about how consumers pay for it.” Sanzillo co-authored a recent report detailing the risks of overbuilding pipelines in Appalachia.

Energy companies themselves are often blaming the economy when they pause or cancel projects. In a few cases, however, companies will acknowledge local resistance. One recent example was Kinder Morgan’s decision last month to suspend construction on the Palmetto Pipeline in the Southeast. In that case, the company cited the Georgia legislature’s passage of new restrictions on pipeline permitting and eminent domain; these limits on industry were strongly supported by landowners in the state.

Over the last six months, multiple natural gas pipelines have also been approved, including two such projects in New Jersey, and the Sunbury Pipeline project in Pennsylvania. The federal government also approved the extension of Enbridge’s Alberta Clipper oil sands pipeline.

Fossil fuel companies generally blame market forces, not public opposition, on the project setbacks, Bold Nebraska founder Jane Kleeb told InsideClimate News. “Everything they say is about demoralizing what we do at the local level and not giving any credit to the people power of this fight,” she said. “In reality, I think it has a lot to do with the people power on the ground.”

Community, environmental justice and green groups from 12 countries are hosting more than 20 local protests and rallies from May 3-15 as part of the Break Free campaign, which was first announced at the Paris climate talks. Protesters are going to the sites of operating or planned fossil fuel projects, demanding that they be shut down or canceled, in some cases risking arrest.

The protests and acts of civil disobedience are aimed at drawing attention to the “gap between what our world’s politicians are doing, and what we know is actually necessary to combat the climate crisis,” said one of the campaign’s planners, Lindsay Meiman, a spokeswoman for 350.org.

The Keystone campaign helped people understand the role of high-carbon energy infrastructure in the climate crisis, according to Kleeb.

“These actions,” she said, referring to the Break Free campaign, “they start helping tell the story that this particular compression station or this particular pipeline or this particular tar sands mining project, it’s all connected to the impacts of climate change, which I think before Keystone XL was not a story being told at all.” 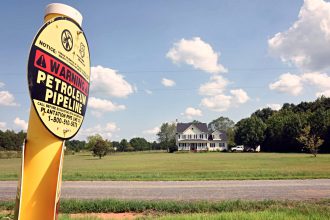 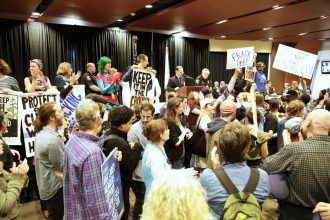 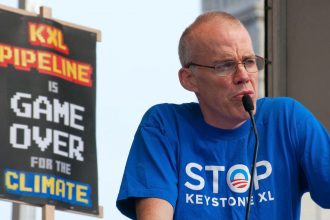