A coalition of states, cities and environmental groups filed twin briefs on Wednesday accusing the Environmental Protection Agency of trying to “perpetually dodge” court decisions that could keep alive the Clean Power Plan, which the Trump Administration wants to dismantle.

They urged the United States Court of Appeals for the District of Columbia Circuit to reject the administration’s new petition to put the Clean Power Plan, the centerpiece of the Obama Administration’s climate policies, into an indefinite state of limbo, while the EPA sends the rule back to the drawing board.

The appeals court heard oral arguments in the case months ago and should be ready to rule at any time. A quick ruling could, within a year, put the regulations on the docket of the Supreme Court, which issued a stay in 2016.

The tussle over how to proceed now that President Donald Trump has ordered the EPA to review the Clean Power Plan suggests that those who favor the rule are more eager for an appeals court verdict than those who oppose it.

A prolonged delay would “concretely harm” people living in their states, the brief said—”many of whom have sought for more than a decade to compel EPA to regulate carbon dioxide emissions from power plants.”

The brief even made a veiled threat that if the courts ultimately rule that states have no recourse under the Clean Air Act to regulate CO2, they might fall back on a tactic that worked for them in the past: suing polluters under common law for the “nuisance” of intense storms, rising seas and damage to public health.

That was a reference to an earlier lawsuit, Connecticut v. American Electric Power, which was tossed out when the Supreme Court ruled that the Clean Air Act pre-empted common law.

The brief noted that it’s not clear how the EPA could even conduct a thorough review of the Clean Power Plan under Trump’s latest budget proposals. Recently leaked draft documents describe deep cuts to staff working on climate change, including the score of lawyers working on the Clean Power Plan for the agency’s general counsel.

In a companion brief, several environmental groups made similar complaints. The Trump team’s motion to put the case in abeyance, they wrote, is an atttempt “to do what it could not do otherwise: effectively and indefinitely suspend a duly promulgated rule without proposing, taking comment on, justifying, or defending in court any legal or factual premises that might support such a result.”

The briefs cited extensive precedents for rejecting the Trump argument. But one might carry particular weight: a ruling on April 3, when the Supreme Court itself rejected a comparable request for an abeyance on a different rule, under the Clean Water Act.

“An order mothballing this case would leave our millions of members with no federal protections in place from this dangerous pollution with long-term impacts,” the green groups pleaded. “Moreover, the combination of the judicial stay and abeyance would leave scant incentive for EPA to act.” 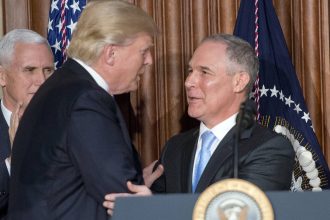