Within hours of moving by executive order to dismantle U.S. actions on the climate change crisis, the Trump Administration asked a federal court to stand down on pending litigation over the Clean Power Plan. The legal salvo could keep regulation of carbon dioxide emissions from fossil fuel power plants in limbo for the foreseeable future.

The Justice Department on Tuesday asked the United States Court of Appeals for the District of Columbia Circuit, which heard oral arguments months ago in a case challenging the landmark Obama-era regulations, “to hold cases in abeyance.” Last February the Supreme Court issued a stay of the rules, and the appeals court has not yet ruled.

“The Clean Power Plan is under close scrutiny by the EPA, and the prior positions taken by the agency with respect to the Rule do not necessarily reflect its ultimate conclusions,” the department said in a motion to the appeals court.

“Deferral of further judicial proceedings is thus warranted,” it said.

Instead of facing an imminent but unpredictable ruling on the merits by the federal court best versed in the complexity of this case, the Justice Department and its client, the Environmental Protection Agency, asked for a standstill “until 30 days after the conclusion of review and any resulting forthcoming rulemaking.”

Whether or not the appeals court defers its decision, the central pillar of the Obama administration’s climate action plans seems likely to be on ice for at least a few years. Even if the appeals court disregarded this request and issued a ruling wholly upholding the Obama rules, the case would then face review by the Supreme Court.

According to the Justice Department’s filing, the green groups and their allies “intend to file motions in opposition,” which means that at the very least there will be a detour in the lengthy litigation.

New York Attorney General Eric T. Schneiderman said that he will file in opposition to the Trump administration’s motion on behalf of a coalition of 23 states, cities and counties who are seeking to uphold the Clean Power Plan.

“The case was fully briefed and argued before the full D.C. Circuit six months ago, and the fate of the rule is now in the court’s hands,” Schneiderman’s spokeswoman, Amy Spitalnick, said in an email.

Some environmentalists have argued that the slow-motion course makes little difference as a practical matter, since power plants have been cleaning up their emissions and appear likely to meet the near-term goals of the Clean Power Plan. Meanwhile, Trump’s EPA cannot replace the Obama rules with anything softer without going through a time-consuming review process, which green groups and their allies would fight.

But it’s clear that the Trump team and its allies in the fossil fuel industry and coal-friendly states have no problem with letting matters drag on. The Justice Department argued that its green opponents “face no immediate harm from the postponement of judicial review,” and noted that “no carbon dioxide emission reductions are required from sources under the Rule until 2022 at earliest.”

The new administrator of the EPA, Scott Pruitt, meanwhile signed a Federal Register notice on Tuesday initiating its formal review of the Clean Power Plan, as directed by the executive order signed earlier in the day in a ceremony at EPA headquarters.

If the early review, which could take months, “concludes that suspension, revision or rescission of this Rule may be appropriate, EPA’s review will be followed by a rulemaking process that will be transparent, follow proper administrative procedures, include appropriate engagement with the public, employ sound science, and be firmly grounded in the law,” Pruitt’s notice read. 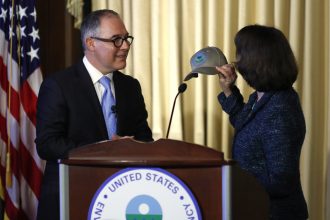