At his hog farm about a dozen miles from Las Vegas’ famed strip, Bob Combs became a celebrity of sorts for hauling thousands of pounds of leftovers from casinos’ all-you-can-eat buffets and feeding it to his 3,000 pigs.

Farmers used to call the practice “garbage feeding.” Today, researchers see it as a tool for stemming climate change. That’s because the growing amount of wasted food around the world adds methane, a potent greenhouse gas, to the atmosphere as it rots in landfills.

Combs just happened to be a pioneer recycler.

“These buffets, they generate so much waste,” said Nicole Civita, director of the Food Recovery Project at the University of Arkansas School of Law. “They have to serve all kinds of food, a diversity. But the side effect of all that choice is there are lots of things we don’t choose.”

Casino diners in Las Vegas aren’t the only ones to blame. Together, the world’s food makers, farmers and consumers toss away one-third of all the food produced for human consumption.

If global food waste was a country, it would be the third-biggest greenhouse gas emitter after the U.S. and China. In the U.S., methane accounts for about 11 percent of greenhouse gas emissions—about a quarter of which comes from decomposing, uneaten food. If more supermarkets, restaurants and hotel chains redirected that waste into farm fodder, it could benefit not just the climate by reducing methane emissions, but also conserve the huge amount of resources that go into growing food for livestock.

“When we’re talking about food waste going to animals, what we’re talking about is to offset the food we feed to them,” explained Dana Gunders, a senior scientist with the Natural Resources Defense Council (NRDC). “That’s the biggest climate benefit of feeding wasted food to animals. But on top of that you can benefit from it not decomposing in landfills.”

It seems like a win-win-win situation. But a patchwork of restrictive state and federal laws means U.S. farmers rarely feed food scraps to livestock anymore. So Civita and her colleagues worked with Harvard University’s Food Law and Policy Clinic to produce a report to help farmers revive this out-of-fashion practice.

The guide, called Leftovers for Livestock, helps steer waste-generators and farmers through the various laws that limit feeding scraps to farm animals. Many of those were passed after livestock diseases were linked to animal products in feed, notably mad cow disease in cattle and foot-and-mouth disease in swine. By 2007, the guide reports, only 3 percent of American hog farmers fed scraps to their animals.

“We needed to do this work to demystify all this so that people on the ground, producing our food, can actually make use of this more sustainable feed supply,” Civita said. “Farmers are really busy people. We can’t expect them to figure out these regs on their own.”

The guide addresses just a small piece in the broader discussion of food waste, which has grown louder and more urgent in recent years. The issue has grabbed the attention of U.S. lawmakers, including Rep. Chellie Pingree (D-Maine), an organic farmer. In late 2015, she introduced a bill that would, among other things, tweak the laws pertaining to grocery “sell by” dates and expand tax breaks to encourage farmers, restaurants and retailers to donate food waste to food banks and shelters. Tossing food, Pingree said at a meeting in Washington, D.C this summer,  is “viscerally something we know we shouldn’t be doing.”

But it’s also morphing, at least in the public’s awareness, from a moral no-no in a world where hunger is commonplace—a kind of collective ethical transgression—into a climate change issue (also a moral cause for many).

“I kept saying, how can these numbers be true, and if they are, how can nobody be talking about them?” Gunders recalled. “But I think it’s very safe to say that the level of attention and awareness has increased dramatically. The concern around food waste has gained a ton of traction.”

Last year the U.S. Environmental Protection Agency and Department of Agriculture announced an ambitious goal: a 50 percent reduction in food waste by 2030, in line with the UN’s Sustainable Development Goals. Across the country, cities are implementing food waste diversion programs, and entrepreneurs are entering the food waste business.

Governments and advocates in industrialized countries have aimed their waste-reduction initiatives largely at consumers. Increasingly, Civita and her colleagues say, farmers have expressed an interest in helping out on their side of the equation and cutting food losses before the food enters consumer channels.

“Farmers all around me said: For ages humans have had closed-loop food systems,” Civita said. “But how do we do this legally?”

There are limitations beyond legal ones.  Already much of the spent grains in the U.S.—like those used in brewing or distilling—go into animal feed, largely in big, industrialized operations. Most remaining food waste—our leftovers—is more difficult to convert into feed. Meanwhile, livestock producers have carefully calibrated the feed they give so that animals grow to exactly the right weight at the right pace, and wasted food may not represent the most efficient fodder.

“They say: It’s going to cost me more in the long run,” Civita said. “So we need to do a lot more to figure out how to do this more efficiently.  Right now, we’re talking about using leftovers as a supplement.”

Civita and her colleagues haven’t yet calculated the precise environmental impact of recycling food waste into livestock feed. In fact, research around food waste is so new, that the World Resources Institute, working with 200 or so global stakeholders, only this year released a standard measure of it.

“Food waste doesn’t mean the same thing universally,” explained Kai Robertson, who leads the institute’s food loss and waste program. “It’s difficult to manage what doesn’t get measured, and because it’s not that straightforward to measure food waste, this standard provides for a common framework.”

Going forward, that standard could help waste generators measure how much they toss—and target better ways to reduce it.

The UN already estimates that diverting food waste into feed could free up enough land to feed 3 billion people, and a University of Cambridge study found that feeding food waste to pigs in the European Union could cut the amount of land used to grow pig feed (soybeans and corn) by 4.4 million acres. That report calculated that 600,000 of those acres are in Brazilian tropical forests and savannah, which are increasingly being cleared to grow animal feed.

“They take that food and immediately put in back in the food system, utilizing excess to substantially increase the efficiency of producing pork,” Civita said. “That’s a pretty good solution.” 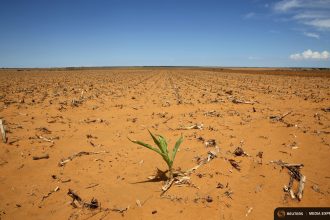 Climate Change Raises a Troubling Question: Who Gets to Eat?