As Donald Trump pushes the United States toward inaction on climate change, he is likely to find an ally in Russia.

Russia is the fifth-largest emitter of greenhouse gases in the world. Yet the plan it submitted under the Paris agreement to reduce its greenhouse gas emissions by 2020 is one of the weakest of any government and actually permits Russia to increase carbon pollution over time. The Paris agreement went into effect last November, but Russia is the only major emitter that has not ratified it. Instead, it has laid out a timetable that would delay ratification for almost three years.

A new alignment between Russia and a friendlier United States under Trump could slow climate action even more.  Trump denies global warming more nakedly than Russian President Vladimir Putin, who pivoted from years of downplaying climate change to calling it a grave threat in 2015, but has done little to rein in greenhouse gas emissions. Russia’s sluggishness on climate could bolster the Trump team’s plans to abandon climate action, and vice versa.

The Russian Federation has a history of denial and inaction on the issue. The country is a petro-state: It was the world’s second-largest exporter of oil in 2015, after Saudi Arabia, and biggest exporter of natural gas. Russia’s top politicians and its largest companies have long been reluctant to reduce fossil fuel extraction and use. Recently, some in the government and Russian business have begun taking steps to shift away from fossil fuel dependence. But that progress may slow now that the United States, the world’s second-biggest emitter, is shifting its priorities toward increased fossil fuel production, experts on Russian climate policy said.

Under the Paris accord, Russia’s plan to cut greenhouse gases calls for reducing emissions by 25 to 30 percent from 1990 levels by 2020. But 1990 was a relatively high mark for Russia’s emissions. Starting in 1991, the dissolution of the Soviet Union and the collapse of Russian industry produced a steep drop in emissions.

In 2014, Russia hit its target of a 30 percent reduction from 1990 levels, according to Climate Action Tracker, a coalition of European scientific groups. In fact, Russia’s greenhouse gas emissions have been rising by about 1 percent a year since 2000, according to a 2016 paper based on data from the UN Framework Convention on Climate Change (UNFCCC).

“These targets have basically allowed the economy to develop along business-as-usual lines,” the Norwegian authors wrote.

If Russia’s commitment under the Paris agreement is so weak, why has Moscow been slow to ratify the accord? “It’s not a question of logic, but rather one about ideology,” said Vladimir Chuprov, head of the energy unit at Greenpeace Russia. The ratification question “is about whether Russia is ready to go green or not, phase out fossil fuels or not.”

Nonetheless, the political elites are divided about ratifying the Paris accord as swiftly as other nations have. On one side are many senior government officials, ministries, some banks and high tech companies that want to cut emissions, Angelina Davydova wrote in September 2016 article in The Conversation. Lined up against them, however, are many of Russia’s largest corporations, mainly in coal, steel, oil and gas.

“Fossil fuels are richer and in a better lobbying position and they are much, much stronger” than the camp that backs climate action, Chuprov said. “The coal companies are the most aggressive but oil also doesn’t want to ratify the Paris agreement because it would mean the stoppage of the oil economy and an end to all the subsidies oil gets.”

The oil and gas sector also contributes a vast percentage of Russia’s greenhouse gases, about 45 percent, according to the UNFCCC’s 2014 inventory, wrote Alexey Kokorin of the World Wildlife Fund, Russia in a June 2016 paper in Russian Analytical Digest. Russia’s methane emissions account for 2 percent of all global greenhouse gases, the equivalent of emissions from global aviation, Kokorin continued. The oil and gas sector, in turn, produces 75 percent of Russia’s methane emissions.

It appears unlikely that Russia will rein in emissions or the expansion of the oil and gas industry, which contributes about half the revenues to the domestic budget. Oil production on land is falling, so Russia is looking to tap the vast petroleum and gas reserves offshore in the Arctic. A friendly administration in Washington could help. In 2011, Russia and ExxonMobil, under chief executive Rex Tillerson, signed a $500 billion deal to develop oil and gas in the Russian Arctic.

But sanctions imposed in 2014 by the Obama administration after Russia’s invasion of Ukraine stalled the projects. Tillerson, now secretary of state, and Exxon lobbied against the sanctions. If the Trump administration and the GOP-led Congress lift the sanctions, oil and gas extraction in the Russian Arctic would proceed and unlock a vast amount of greenhouse gases.

So far, Russia has viewed emissions reduction as only an exercise in energy efficiency, not in deploying renewable energy, except for hydroelectric power, Kokorin wrote. But the sanctions have made it difficult to tap capital markets to raise money to improve energy efficiency in electricity transmission and in housing, said Davydova, a Russian environmental journalist and lecturer at St. Petersburg State University.

Russia has commissioned government studies of how ratification of the Paris agreement would affect its economy. It wants to see the agreement produce rules advantageous to Russia before it ratifies, such as calculations of the impact of forests and land use on emissions, experts said. Russia aims to present a draft plan of its 2030 emissions targets in March 2020.

Given how weak the 2020 Russian targets are, the effect of Trump could be minimal. “Russia’s climate action can hardly get any less ambitious than it is now, so I can’t see how the U.S. intentions can affect it,” Maria Sharmina, a lecturer at the Tyndall Centre for Climate Change Research in Manchester, England said in an email, adding she was more concerned that U.S. disavowal of Paris would lead the rest of the world to pull back from emission reduction plans.

Other Russian climate policy specialists think U.S. rejection of climate action would deal a blow to the emerging pro-climate voices in Russia. “Russia looks to the U.S. and China’s plans on climate change,” Davydova said in a phone interview. “China might be getting more climate-oriented but if the U.S. pulls out of Paris, it’s a huge argument to Russia to go even more slowly.” 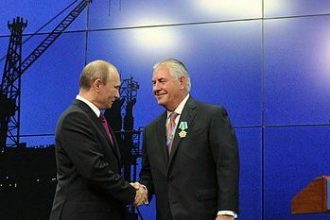