PORT OF SAN DIEGO—Jesse Nelson, operations manager for Terminalift, a cargo loading company, is taking his new toy for a spin. The electric semi truck is about 22,000 pounds unloaded, but it slides silently between the towering loading cranes as it navigates a crowded pier at San Diego’s bustling wharf.

When Nelson sees another dock worker crossing his path, he gives the horn a long pull. “It is so quiet,” he says of the truck, “people can’t hear us coming.”

Electrified big trucks and other heavy equipment may be sneaking up on port workers, but cutting their greenhouse gas emissions is the next frontier in the nation’s effort to decarbonize. Experts say it is particularly necessary in California if the state is going to meet its goal of cutting emissions by 80 percent below 1990 levels by 2050.

“If California is going to meet its own targets, medium- and heavy-duty vehicles become critical,” said Salim Morsy, a transportation analyst with Bloomberg New Energy Finance.

Because of the widespread adoption of renewable energy and natural gas in electricity generation, the transportation sector is now the leading emitter of carbon dioxide. Tough fuel efficiency standards have started to make inroads in cutting carbon pollution from cars, but California is betting electrification of everything from cars to forklifts can produce even more dramatic declines for the sector as a whole.

There is one big catch—it could be expensive.

The electric semi is one of two trucks that Terminalift bought with part of a $5.9 million grant that the California Energy Commission gave the San Diego Port Tenants Association in the summer of 2016. The money will cover the purchase of seven large trucks and three electric forklifts to be divided among different tenants.

That’s a relatively high cost per vehicle. Over the course of the 18-month demonstration project, the machines are expected to emit 950 fewer metric tons of greenhouse gases than the diesel machines they are replacing. That’s not necessarily a good return on investment. But port officials say part of the experiment is figuring out how long these machines will last—the longer the life, the better the return on investment. It is also to test whether owners like them enough to buy them without a grant; if the market becomes big enough, the machines could be mass produced instead of custom designed, which would bring their cost down.

In addition to the machines, there are big infrastructure costs, too. In January the state’s three largest utilities asked the Public Utilities Commission for approval to raise customer rates by $1 billion in order to upgrade electric charging infrastructure, much of which would directly target heavy- and medium-weight vehicles like buses, trucks and forklifts. Southern California Edison would spend $573 million of the new revenue to create the infrastructure needed to electrify the entire freight handling system at the Port of Long Beach. San Diego Gas and Electric would spend $2.4 million of its money for 30 installations at the port, including a combination of chargers and load research meters.

The ports are big polluters

There are three big ports in Southern California: Los Angeles, Long Beach and San Diego. More than 40 percent of the nation’s imported goods arrive at their docks. While the ports are important employers, they are also big polluters. The California Air Resources Board has long pushed them to reduce the amount of dirty particulate matter that their ships, trucks, forklifts and cranes spew into the air.

Some progress has been made. Since 2014, the California Air Resources Board has required 50 percent of the ocean-going ships docked in the ports to turn off their engines, which they had traditionally used in harbor to keep their lights on and their refrigerators cold. The ships now have the capability to plug into the port electrical systems.

The Los Angeles and Long Beach Ports, which sit alongside each other, have instituted a panoply of programs to cut pollution. In addition to pioneering the plugging in of vessels, they now use electric trains to carry cargo. They’ve also built solar arrays and microgrids to power the ports.

San Diego is much smaller than its sister ports; it is only the seventh largest in the state. But because it operates more like a cooperative of businesses than an arm of government, it offers a better model for how private sector businesses can move toward electrification.

Unlike the ports in other cities, which are frequently owned by the municipality and funded in part with tax revenue, the Port of San Diego raises all its funds from a diverse group of leaseholders—including hotels, restaurants, the military, a convention center and freight movers. It is responsible not just for keeping the port functioning, but also for caring for nearby tidelands and 22 state parks along the shore.

Because of this mandate, it has been an enthusiastic protector of the environment. It runs land and water conservation programs. And in December 2013, the port voluntarily adopted its own climate action plan, which called for a 25 percent reduction of 2006 greenhouse gas levels by 2035.

Philip Gibbons, a senior environmental expert with the port, reports that it is well on the way to meeting its 2020 and 2035 goals, but he says it needs to step up its programs if it is going to meet the more ambitious goals for 2050 set by California regulators.

For instance, he said, “We are redeveloping our 10th Avenue Marine terminal, and we are going to be demolishing a couple buildings and open up a lots of space so we can lay conduit for future electrification.”

“We don’t have a specific plan for 2050, but this way we will be able to have that infrastructure in place anyway,” he said.

The port is also planning its own large-scale solar installation.

But Gibbons readily acknowledges that the port can’t do everything itself. “Our tenants are the ones who own and operate the equipment,” he explained. “We need them to come on board.”

That means they need to be able to replace their diesel machinery with electric substitutes, which can be very expensive. “A new diesel yard truck could cost $150,000,” Gibbons estimates, “whereas a zero-emission truck could be $300,000 to $500,000. A new lift that is all-electric could be $1 million. There is no showroom for this stuff. You have to work with technology vendors creating it.”

That’s why the grant money won by the tenants association that went to companies like Terminalift is so crucial. It allows the owners to experiment and to eventually come up with new technology that is as efficient as what it is replacing.

For instance, when a ship is in port, freight companies may work 24 hours until the ship is either loaded or unloaded. The owners have to feel confident that their equipment can operate non-stop without long breaks for charging.

The good news is that the owners who have tried the new technology like it—despite the cost.

Larry Schmitz, the owner of Terminalift, is an electrification pioneer. The state grant allowed him to add two new semi trucks to his fleet. Schmitz says the trucks spend most of their days going back and forth between the marine terminal and a General Dynamics subsidiary that services ships delivering steel and cargo. To get there, Schmitz points out, the trucks have to travel through the Barrio Logan area, a community whose residents have complained about air and noise pollution. With the new trucks, Schmitz hopes complaints will go down.

On his own initiative—and without state funding—Schmitz decided to electrify one of his massive cargo lifters as well. The California Air Resources Board has mandated for years that older diesel vehicles at the port be outfitted with emissions filters. These can cost upwards of $30,000. Schmitz took the filter route for two of his cargo lifters.

When a third came due for an upgrade, he decided to try electric technology. He says it cost over $200,000 to have the lifter custom fitted with an electric engine and an additional $10,000 to install an electric charging station. He is happy with the result. For starters, he believes, he needs to stay one step ahead of the regulators. “CARB is always on our butts to make these things conform,” he jokes of the California Air Resources Board. “If they don’t, we can’t use it. So I thought I’d go the next step and make it electric. So when they come back in 2020 and tell me the other machines don’t conform, I’ll still be ahead.”

The biggest surprise is how much more his drivers like the electric lifter. “They just work better,” Schmitz says with a laugh.

Termalift operations manager Jesse Nelson agrees. “I can hit the joy stick by accident with my elbow and nothing will happen,” he says of the machine. “It’s all in your foot.” With a diesel, he says, such a mistake would cause an accident. “With electric, we have much more control.” 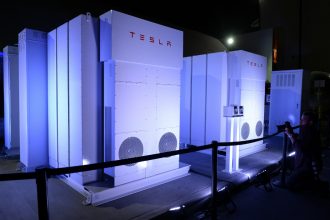