Climate activists sense a turning point in their war against the Trump administration’s effort to cement a fossil-fueled future for the United States, with three major defeats for high-profile oil and gas pipeline projects.

Early Monday, a federal judge ordered the shut-down and emptying of the Dakota Access Pipeline pending an environmental review—an extraordinary, if not unprecedented, remedy for the Standing Rock Sioux tribe in its long fight against the project. Late in the day, the U.S. Supreme Court denied an emergency bid by the Trump administration and Canada’s TC Energy to allow construction of the Keystone XL pipeline to move forward while legal issues are resolved.

“A new era upon us—one for clean energy, and one where the risks of fossil fuel infrastructure are increasingly exposed,” said Kelly Martin, director of the Sierra Club’s Beyond Dirty Fuel campaign.

Greg Buppert, senior attorney for the Southern Environmental Law Center, said that six years ago, when landowners and communities took up the battle against the Atlantic Coast Pipeline, there was little reason to think they would succeed.

“The remarkable thing is these communities, organizations and landowners never backed down,” Buppert said. “They’ve won a victory, really for every community facing the unfair burden of an unneeded project.”

“Two things really stand out to me as the lessons—the voices of the community matter and the law matters,” said Buppert.

U.S. Energy Secretary Dan Brouilette blamed a “well-funded environmental lobby” for making the Atlantic Coast project “no longer economically viable.” He asserted that the result will be higher energy costs for consumers.

The American Petroleum Institute, the oil and gas industry’s largest advocacy group, said in a statement after the cancellation of the Atlantic Coast pipeline that “outdated and convoluted permitting rules are opening the door for a barrage of baseless, activist-led litigation.”

Coming in less than 48 hours, the pipeline decisions amounted to a vivid rebuke of President Donald Trump’s efforts to sweep aside obstacles to the oil and gas industry’s desired expansion. The future of big fossil fuel infrastructure projects is more murky than ever, despite Trump’s three executive orders expediting pipelines, his relentless regulatory rollbacks and his abandonment of climate policy.

Much of the uncertainty stems from the economic turmoil wrought by the coronavirus, which some analysts believe will force an historic retrenchment of the industry. But the pipeline setbacks demonstrate the potency of the opposition the industry faces from tribes, community activists, landowners and those fighting for a clean energy transition. Pipeline proponents have vowed to push forward, however it is now clear that they are not on a glidepath, but in a slog.

A Judge Ordered Dakota Access Emptied of Oil by Aug. 5

The Dakota Access project—the largest pipeline out of North Dakota’s Bakken shale basin—became a symbol of fossil fuel industry expansion, and resistance by the Standing Rock Sioux inspired protesters around the world.

Even after Trump, in one of his first acts in office, accelerated the permitting process and got oil flowing, the tribe continued to pursue legal action—arguing its water source for drinking, fishing and religious ceremonies was at risk.

In March, the tribe scored a major victory when U.S. District Judge James Boasberg ruled that the Trump administration had not done an adequate job of studying the risks of the project as required under the National Environmental Policy Act (NEPA).

On Monday, after hearing arguments from the parties, Boasberg concluded that operations should cease while the environmental review takes place; he ordered the pipeline emptied by Aug. 5. Boasberg—who was made a judge in the District of Columbia by President George W. Bush and elevated to the federal bench by President Barack Obama in 2011, said the “potential harm each day the pipeline operates” outweighed concerns over “the disruption such a shutdown will cause.”

Jan Hasselman, an attorney for Earthjustice, an environmental organization representing the tribe in court, said he couldn’t think of another case where a federal judge intervened in a dispute over a pipeline already in operation. “We asked the court to do something that was unprecedented, but the law was on our side and it was the right thing to do,” he said.

Hasselman was careful to note that the fight was not over and, indeed, Dallas-based Energy Transfer is seeking a stay of the decision. But Hasselman said the tribe now sees the possibility of a new permit decision for the project in the next administration.

Michael Gerrard, founder and faculty director of the Sabin Center for Climate Change Law at Columbia University, said a confluence of forces are now clearly weighing on the oil and gas industry, much as economics and activism caused the coal industry to founder over the past two decades.

“The construction of new coal-fired power plants in the U.S. was halted by a combination of economics”—the emergence of abundant natural gas and, later, inexpensive wind and solar—“and a ferocious and effective litigation and organizing strategy,” he said. “We’re now seeing similar ferocity and effectiveness in the fight against oil and gas pipelines.”

He said it is less common for a court to shut down a project already in operation than to block a project that hasn’t yet been built. “The fact that Judge Boasberg is ordering the oil to stop flowing shows how seriously he takes the Corps’ legal violations, and the plaintiffs’ claims about the environmental hazards of continued operations,” said Gerrard, referring to the U.S. Army Corps of Engineers, the federal permitting authority for such projects.

Jayni Foley Hein, natural resources director at New York University Law School’s Institute for Policy Integrity, said that the Dakota Access decision underscores the importance of  the environmental review process under NEPA, which the Trump administration is seeking to scale back through new regulations.

For the Atlantic Coast Pipeline, the end came despite a significant victory that Dominion Energy and Duke Energy won at the U.S. Supreme Court—the right to cross the Appalachian Trail. Still, the project’s costs had swollen from an original estimate of about $5 billion to $8 billion, the companies said.

In their announcement, the companies specifically called out a recent decision by a U.S. District Court judge in Montana in the Keystone XL case, overturning a blanket federal permit process used by the Army Corps to allow oil and gas pipelines to cross wetlands and water bodies. Keystone XL runs from the Canadian province of Alberta to refineries in Illinois and Texas.

On Monday, the Trump administration and TC Energy—formerly TransCanada—failed in a bid to stay that decision at the Supreme Court. Justice Elena Kagan, as is typical in emergency stay rulings, made no ruling on the law and made clear TC Energy can continue to pursue its legal appeal at the high court. There was a limited win for the oil and gas industry, in that Kagan made clear that other pipeline decisions under the permitting process could move forward while the legal issues are decided.

But that hardly removes the cloud of uncertainty over the dozens of projects that may have to pursue a costly case-by-case permitting process for each pipeline that crosses a waterway if the lower court decision ultimately is upheld.

While the American Petroleum Institute and Energy Secretary Brouilette blamed activists for the pipeline defeats, leading environmentalists said it was economics and changing political will in Virginia and North Carolina that doomed the Atlantic Coast project.

In April, Virginia Gov. Ralph Northam signed a bill making Virginia the latest state, and the first in the South, to require a transition to 100 percent carbon-free or renewable energy. Dominion has responded by announcing plans to boost its own renewable energy projects, including more than 5,000 megawatts of offshore wind by 2035.

Led by Gov. Roy Cooper, North Carolina—battered by back-to-back hurricanes—has adopted its own clean energy and climate strategy that has put his state on a path to achieving a 70 percent reduction in electric utilities’ greenhouse gas emissions by 2030, and carbon neutrality in the power sector by 2050.

Cooper, in a written statement, said he welcomed the decision and what he called a “changing energy landscape” that will “lead to cleaner and more reliable energy generation in North Carolina.”

Not everyone is bearish on the fossil fuel future. Dominion announced that it was selling almost all of its gas transmission and storage assets to an affiliate of Warren Buffett’s Berkshire Hathaway Inc., in a transaction valued at $9.7 billion, and Sen. Joe Manchin (D-West Virginia) said the loss of the Atlantic Coast project will be a blow to the region.

“The pipeline would have created good-paying construction and manufacturing jobs for hard-working West Virginians, reinvested in our energy markets (and) strengthened national security with reliable energy to key military installations,” Manchin said in a statement.

But for now, pipeline opponents have been savoring long-sought victories that were particularly resonant with the racial justice protests that have been roiling the nation in recent weeks.

“It has been six years since the Dakota Access Pipeline (DAPL) began slithering a path through our treaty territory,” said Harold Frazier, chairman of the Cheyenne River Sioux Tribe, which had joined the Standing Rock Sioux in their fight. “Today, the U.S. District Court ordered that the snake of oil moving through our territory cease.” 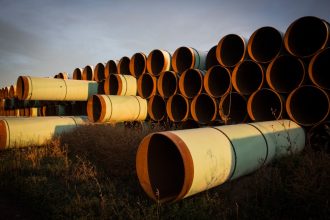 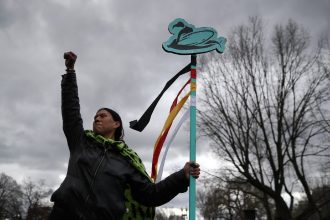 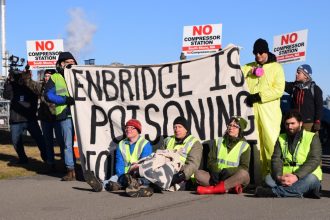