To fund its $18 million, 16-study investigation into methane emissions from the natural gas industry, the Environmental Defense Fund assembled a sprawling network of private donors, foundations, utilities, fossil fuel companies and others. The project attracted backers with a range of sometimes-conflicting stances on fracking.

The list varies from clean energy-focused foundations like the TomKat Charitable Trust to fossil fuel companies such as Encana Corp. and TransCanada, the Canadian energy giant behind the controversial Keystone XL pipeline, to multinational conglomerates such as PepsiCo.

While EDF has pushed for stronger regulations for the booming natural gas industry, several of the project’s sponsors also support efforts to dismantle fracking regulations. Chevron, Shell, Anadarko and XTO Energy, for example, fund Energy in Depth, a group that works to discredit grassroots opposition to fracking, as well as local, state and federal regulations.

Others appear to straddle both sides of the issue. The Cynthia and George Mitchell Foundation, a charitable organization created by “the father of fracking,” George Mitchell, has given EDF $550,000 for its natural gas research and policy work since 2012, and $750,000 more for clean energy programs. Tax documents obtained by Greenpeace show that the Mitchell Foundation also paid the public relations firm FTI Consulting—the group that runs Energy in Depth—$120,000 to work on a communications strategy. That was for a project in 2012 to start a dialogue between fossil fuel concerns and environmentalists around natural gas.

The varied interests demonstrate just how large the gap is in fracking knowledge that EDF’s research is trying to fill—as well as the organization’s reach.

Fred Krupp, president of EDF, said the $18 million in donations went straight to the scientific teams conducting the methane research. None of the funders are “involved in making decisions about [EDF’s] policy on natural gas or methane” or shaping the outcomes of its fracking studies, he said.

Read: EDF Sparks Mistrust, and Admiration, With its Methane Research

Two-thirds of the money came primarily from eight individuals and foundations. They include investment tycoons Fiona and Stan Druckenmiller, Bill and Susan Oberndorf, and Betsy and Sam Reeves. The Heising-Simons Foundation, the Robertson Foundation, the Alfred P. Sloan Foundation, and the TomKat Charitable Trust, organizations that focus on the environment, science and education, also contributed. So did the Walton Family Foundation, started by the founders of Walmart. The Mitchell Foundation and other funders gave smaller amounts.

The remaining $6 million came from more than 40 companies, including fossil fuel groups such as Kinder Morgan, Talisman Energy and the American Gas Association, utilities such as Con Edison and Dominion Power, and an assortment of corporations such as Dow Chemical Co. and Volvo.

Those companies also participated in the studies as project partners, offering researchers access to industry sites and providing technical expertise. They were joined by scientists from more than 50 universities, government agencies, environmental monitoring businesses and engineering firms. On the list are the National Oceanic and Atmospheric Administration, the Environmental Protection Agency, the Massachusetts Institute of Technology, Stanford University, and the Council for Foreign Relations.

The Cynthia and George Mitchell Foundation was established in 1978. In 2001, Mitchell sold his fracking technology to Devon Energy, one of the nation’s largest shale gas operators, for $3.5 billion. The foundation is run in part by Mitchell’s children, several of whom work or have worked for Devon Energy and still own a portion of the natural gas company. The foundation’s more than $3.25 million in annual grants goes mostly to projects focused on environmental sustainability, clean energy and efforts to reduce the adverse effects of fracking. Katherine Lorenz, president of the foundation, sits on EDF’s board of trustees.

Its payments to EDF and FTI Consulting in 2012 meant the philanthropic group was funding stronger regulations for the booming natural gas industry while at the same time hiring a group behind efforts to get rid of regulations.

Jesse Coleman, a researcher at Greenpeace, said the group’s personal and financial ties to Devon Energy and FTI Consulting “raise questions” about its true motivations, and what possible influence it could have had on EDF in turn.

“The foundation says it wants to support sustainable fossil fuel development, fracking done correctly,” Coleman said. But it has close ties to “Devon Energy, one of the most politically manipulative shale companies out there, and hires FTI Consulting, which is a key cog in the oil and gas industry’s propaganda efforts. And then gives money to EDF?”

Krupp said any ties the Mitchell Foundation, or any other philanthropic group or company, has with the fossil fuel industry has no influence on EDF’s work.

“If you are assuming that any connection with the energy industry, whether a trustee or a study partner, constitutes a conflict, this is false,” Krupp said in an email. “The trustees are bound by the EDF’s conflict of interest policy, which mirrors that used by the federal government. And the science is independent from EDF staff and trustees. The studies are peer reviewed and not subject to outside influence.”

Marilu Hastings, who leads the Cynthia and George Mitchell Foundation’s grant-making programs, said she approached more than a dozen consulting firms to work on the communications project but was turned down by each because they had conflicts of interest. She didn’t know of FTI Consulting’s ties to anti-regulatory efforts, she said. She worked with one consultant who was recommended by people she trusted. That was David Blackmon, who has called those who accept the scientific evidence for climate change “alarmists.” Blackmon has also said fracking has become an “attention-grabbing boogeyman for all manner of nutcases, chicken littles and radicalized environmental organizations.”

“It was David who I appreciated,” she said. “He did a fine job for us, and didn’t attempt to influence us on the program. I didn’t care one way or the other about FTI Consulting.”

Mitchell’s final wish was that the foundation ensure fracking is done safely and responsibly, Hastings said.

“We have a really tough time being the Mitchell Foundation,” she said. “We’ve been thrown out of meetings with environmentalists, and shut down by industry. The last thing I would do is do anything to doubt my integrity or the foundation’s integrity.” 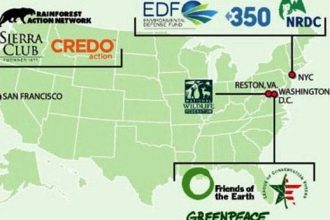