Conditions were optimal for an overflight on a bright, sunny November day in New Bern, a riverfront city that was North Carolina’s first state capital and the birthplace of Pepsi. Larry Baldwin and Rick Dove, his colleague at the Waterkeeper Alliance, an international nonprofit focused on clean water, stood next to a small Cessna airplane, going over their flight plan before taking off.

Baldwin’s mission was to fly over eastern North Carolina—host to an increasing number of industrial-scale hog and poultry barns, often crowded right next to one another, to collect evidence of the waste being discharged into nearby creeks and waterways, which could threaten neighboring communities with air and water contamination.

For years, Baldwin and his colleagues from Waterkeeper organizations across the state have been undertaking airborne sorties in privately chartered planes to document hog and poultry waste leaking into watersheds. Baldwin would snap pictures to supplement ongoing investigations into livestock operations he suspected were illegally contaminating water with waste from open pits of hog feces and urine.

“These Concentrated Animal Feeding Operations, or CAFOs, are spread over large areas, mostly in rural North Carolina, and it’s not easy to discover a violation from the road,” Baldwin said. “That is why we have to get into these small planes to see from above if a swine or poultry facility is committing a violation.”

Flights, Baldwin said, are the best way to compile evidence of violations and potentially illegal waste management practices by CAFO operators, he said, as well as monitor the increasing proliferation of large-scale hog and poultry operations into areas with low-income communities of color.

“The most typical pollutants found in air surrounding CAFOs are ammonia, hydrogen sulfide, methane, and particulate matter,” according to a report from the National Association of Local Boards of Health, “all of which have varying human health risks.”

A recent study by the National Academy of Sciences attributed 95 premature deaths annually in North Carolina’s Sampson County, and 83 such deaths in its Duplin County, to the fine particulate air pollution caused, in part, by ammonia emissions from hog operations. Minority neighborhoods in the state are disproportionately impacted by hog farm pollution and face myriad health problems from the pollution, including anemia, infant deaths, kidney disease and septicemia, according to research from Duke University.

Civil rights activists have for years pointed out long-standing environmental issues related to the continued usage of lagoon and sprayfield systems, an outdated waste management practice in which untreated hog urine and feces are stored in giant, open lagoons and periodically sprayed into the air and onto nearby fields as fertilizer.

The problem is compounded by the rapidly proliferating poultry industry, which is largely unregulated. The state’s Department of Environmental Quality does not even have information on the location or waste disposal practices of these industrial-scale chicken and turkey barns.

Commercial poultry farms produce more waste laden with nitrogen and phosphorus than the state’s massive commercial hog farms but need no operating permits, face no requirement to submit waste management plans to the DEQ and can only be inspected if someone in the community complains about their operations.

Nutrient pollution from the over-application of nitrogen and phosphorus in animal manure and chemical fertilizers is considered one of the country’s most widespread and costly environmental problems, causing algae blooms that kill fish, harm aquatic habitats and sicken humans with elevated toxin concentrations and bacterial growth.

The near absence of regulatory controls and enforcement action has left communities to fend for themselves. Waterkeepers attempt to fill in the gaps by monitoring air and water pollution from CAFOs.

“We combine aerial monitoring with on-the-ground investigation including testing ground water to assess if there are elevated levels of nutrients or harmful bacteria in the water body near the suspected hog or chicken facility,” Baldwin explained. When elevated levels of pollution are detected, those results are passed on to the DEQ for action.

But the state regulator has failed to take action against violators despite the evidence of illegal discharge proven by thorough water testing over time, Baldwin said. “The DEQ does not have the resources to undertake independent investigation to detect a violation nor would they admit our findings because it’s done by a third party,” he said.

Josh Kastrinsky, a DEQ public information officer, responded that the department “investigates complaints involving animal feeding operations to ensure compliance with applicable laws and regulations for the protection of the environment and public health.”

Kastrinsky said the department’s Division of Water Resources “may consider third party evidence as a part of their investigation but could not proceed with an enforcement action based only on that data without verification by inspectors.” The Division of Water Resources, he said, investigates complaints alleging immediate threats to the environment or human safety or health within 24 hours. For other complaints, it conducts site visits within five business days.

So the Waterkeepers also inform the public about the environmental harms and risks to public health their investigations into CAFOs uncover. “Hopefully, this will lead to increased public pressure that can get the state to do the right thing,” Baldwin said.

For years, environmental groups have joined communities near swine and poultry operations in urging policymakers to devise a better waste management system than the outdated lagoon and sprayfield systems currently in use.

Instead, last July the North Carolina state legislature passed the Farm Act of 2021, which requires the state regulator to come up with a general permit within a year to enable interested swine operations to trap methane gas from the hog waste stored in open lagoons and convert it into biogas.

The DEQ has already granted four biogas permits to the hog facilities in eastern North Carolina as part of a $500 million program known as Align Renewable Natural Gas, or Align RNG, a joint venture between Smithfield Foods and Dominion Energy Inc. that began in 2018.

Two North Carolina civil rights groups have filed a complaint with the U.S. Environmental Protection Agency to investigate the approval of the plan to produce biogas by the state environmental agency despite the concerns that the project will increase air and water pollution.

DEQ is required to finalize the general permitting process before a July 1, 2022 deadline. 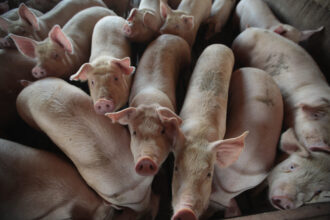