As the U.S. enters the global offshore wind market in earnest, Massachusetts is a state to watch—on shore as well as off.

In a few weeks, the state will announce which among three proposed offshore wind projects it wants to move ahead. No matter which are chosen, Massachusetts wins.

That’s because more than a decade ago, the state began developing the onshore components for offshore wind, including a major offshore wind-ready port in New Bedford, a wind turbine blade testing center in Charlestown and workforce training initiatives. Officials envisioned Massachusetts as the hub for an entire future East Coast wind industry.

In 2006, with a proposal for offshore wind power in the region under consideration, Matthew Morrissey began exploring what the industry could do for New Bedford, where he was the city’s top economic development official. Once a major port, New Bedford’s whaling days were long gone and its fishing drastically diminished.

Offshore wind, he thought, could be its resurrection. He initiated studies and began discussing the idea with lawmakers. Today he’s a vice president at Deepwater Wind, one of the offshore wind developers waiting to hear about their project.

Morrissey and others say it could have come to nothing without Massachusetts’ groundbreaking state policies, beginning with ambitious clean energy goals in 2008 and the state’s first-in-the-nation offshore wind energy mandate. The mandate, approved in August 2016 by Republican Gov. Charlie Baker, requires the state’s utilities to have long-term contracts for 1,600 megawatts of offshore wind power by June 2027.

The competitive solicitation for the first quarter of that is about to be completed, and it includes proposals from all three developers holding lease areas off New England—Deepwater Wind, Bay State Wind and Vineyard Wind.

“The smartest thing they did—they passed that legislation and then they swiftly and effectively implemented it,” said Stephanie McClellan, director of the University of Delaware’s Special Initiative on Offshore Wind. “They will be rewarded for that.”

It would seem the state is already seeing those rewards. Just this month, Bay State Wind, a partnership between Denmark’s Ørsted and New England’s Eversource Energy, announced it would open a facility in Massachusetts to manufacture offshore wind components with steel pipe manufacturer EEW and Gulf Island Fabrication. It predicted the plant would create 500 jobs and lead to 1,200 more in the local community.

Deepwater Wind said in March it was looking at three Massachusetts locations for a wind turbine foundation assembly facility. In February, Anbaric Development Partners, a transmission and microgrid company already located in Massachusetts, received approval from the Federal Energy Regulatory Commission to develop a transmission system for offshore wind in southern New England.

Thomas Brostrøm, president of Ørsted North America, said Massachusetts’ procurement mandate was the “decisive factor” that allowed offshore wind and the economic development around it in Massachusetts to move ahead.

“This gives the visibility and the kind of certainty you need when you’re looking at multi-billion-dollar investments,” he said. “You need to have some kind of reassurance that the state is serious about it, and I think there was a clear signal from Massachusetts.”

It was an eye-opening trip to Denmark that convinced Massachusetts officials their risk would pay off. While the small nation had a modest amount of its own wind power, Denmark housed the lion’s share of Europe’s onshore support for the offshore wind industry.

“Massachusetts has really seen the opportunity to be the Denmark of North America,” said Stephen Pike, CEO of the Massachusetts Clean Energy Center, which operates the New Bedford and Charlestown facilities. “If we can be first out of the gate, get that first mover advantage—then I think, and I think others before me have believed, that we can maintain that pole position.”

The state has agreements from all three developers to use New Bedford’s Marine Commerce Terminal, which opened in 2015, for at least some of their staging operations once construction begins. All three have already been using it as a home port for a survey vessel to take measurements and do other preparatory work.

The port was also a staging area for construction of the only offshore wind farm in the U.S., the Block Island Wind Farm off Rhode Island, which has five turbines able to produce 30 megawatts of power.

The Massachusetts Clean Energy Center, which began operating in 2009, completed an assessment last year of 18 additional port areas that would also be suitable for an offshore wind infrastructure network.

Erich Stephens, chief development officer for Vineyard Wind, a partnership of Avangrid Renewables and Copenhagen Infrastructure Partners, said underwater surveys conducted by the state allowed them to put together a proposal much faster. And the New Bedford terminal, designed with extra lifting capacity to handle heavy wind components, was critical.

As part of its proposal, Vineyard Wind has pledged up to $2 million for what it calls its Windward Workforce training program with community colleges and an area high school. It is also committing $10 million to an accelerator fund for infrastructure upgrades and business relocations and adaptations that would help build a U.S., and preferably Massachusetts-based, supply chain for the industry.

It would reduce, if not eliminate, the need to bring in components and workers from Europe, which is where just about everything the offshore wind industry needs is located now.

Cape Wind Was a Catalyst—Seriously

Massachusetts first got wind of offshore wind in 2001, when an ambitious first-in-the-nation, 130-turbine project to be called Cape Wind was proposed for Nantucket Sound. Fought by powerful interests from one end of the political spectrum to the other, the Kennedy family on the left and the Koch family on the right, it was finally declared dead last year.

But the potential it represented for offshore wind—already proven in Europe—was not lost on business and political leaders in the state.

In 2008, when the state approved ambitious cuts in greenhouse gas emissions and set higher clean energy goals, the legislature and then-Gov. Deval Patrick came up with $113 million to build the Marine Commerce Terminal, even though the only project on the horizon was the perpetually snake-bit Cape Wind.

“There is a period of time where you’re investing and you’re not sure it will be successful,” said Sen. Marc Pacheco, the current president pro tempore of the Massachusetts Senate and the founding chair of the Senate Committee on Global Warming and Climate Change. He was a key force behind the financing, as well as the 2008 legislation, the 2016 offshore wind mandate and current legislation to increase that mandate to 5,000 megawatts by 2035.

“On the other hand,” he said, “if you don’t try, and you’re not getting yourself positioned to be at the cutting edge of this new sector, then you could lose out.”

Just How Much Offshore Potential Is There?

Since 2013, the Bureau of Ocean Energy Management (BOEM), has auctioned more than a dozen offshore wind leases in federal waters off the East Coast, about half of them from New England to New Jersey. Two more off Massachusetts and one off New York are due to be auctioned this year, and just this month BOEM said it would begin a process to look for more offshore wind locations in the Atlantic.

BOEM estimates that just the existing leased areas off New England and New York can support about 7,600 megawatts of power generation.

A series of reports released last year by the Clean Energy States Alliance on behalf of three of its members—New York, Massachusetts and Rhode Island—estimated that about 8,000 megawatts of offshore wind could be developed in the northeast by 2030 and that it could result in the creation of nearly 40,000 jobs.

Numbers like that, experts, state officials and wind developers say, mean that the onshore staging will require more than one port.

Possibly no one knows that better than Deepwater Wind’s Morrissey. When his company developed the Block Island project, its staging required four ports, including New Bedford’s.

Gains in One State Lead to Gains in Others

Massachusetts officials are under no illusion that they will be able to monopolize onshore operations for the U.S. offshore wind industry indefinitely. “Competitive cooperation” is what Pike, of the Massachusetts Clean Energy Center, calls it. “The gains of one state can certainly lead to gains in the other states,” he said.

New York has developed an offshore wind master plan including a workforce training financial commitment. Connecticut is also positioning its port of New London to be a major staging area. It is already home to submarine builders and does not have a hurricane barrier that can restrict larger vessels, like New Bedford has.

Pike believes Massachusetts has the early edge to get some manufacturing providing jobs for welders, electricians, carpenters. “The big kahuna is manufacturing turbines,” he said.

The tricky part is convincing states to spend money now to get offshore wind installation to a level that warrants development of a U.S. supply chain to bring costs down.

University of Delaware’s McClellan offers elements of how to do that: First is training a workforce. Another is structuring timing so there are not more simultaneous projects than there are workers or facilities to handle.

“This is going to be a U.S. industry. This isn’t going to be a little blip on the radar screen of a global industry that’s going to be looked at as kind of the orphan,” she said.  The states may be in competition, but “the more that they see themselves as ‘all ships float or sink’ is a way that we need to move in this sector on the East Coast.” 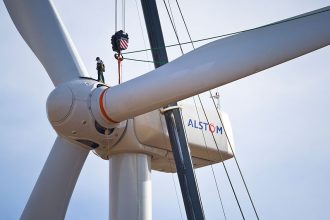 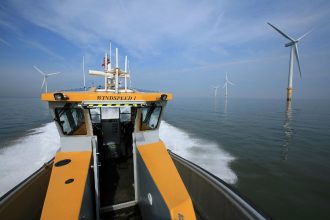 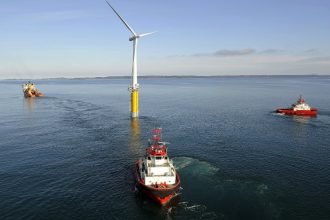 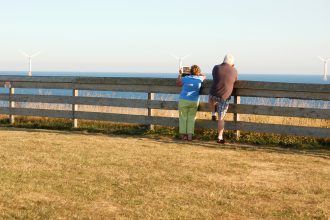