Ozuru Ukoha, a cardiothoracic surgeon in Chicago, treats patients with severe lung diseases, many of whom are constantly exposed to pollution from diesel trucks.

He treats them “along the path of their lives when the effects of the pollution become cumulative,” said Ukoha, who is also a board member of the American Lung Association in Greater Chicago.

This can result in interstitial lung disease, a group of disorders that cause inflammation and lung scarring, which make breathing difficult. Many of his patients facing these health issues are from Southside Chicago, where residents are disproportionately burdened by transportation pollution, according to data compiled by the Agency for Toxic Substances and Disease Registry.

Illinois ranks fifth among all states for the highest number of deaths from diesel particulate matter, according to a report by the Respiratory Health Association and the Clean Air Task Force.

Now, Ukoha is among a large group of health experts and organizations urging Illinois Gov. J.B. Pritzker to slash air pollution from trucks in the state. On Wednesday, the group sent a letter to the governor calling on him to adopt truck pollution rules that would impose emissions standards on new medium- and heavy-duty trucks that burn fossil fuels and require that a larger percentage of zero-emissions trucks be produced in the state. The Union of Concerned Scientists, the Respiratory Health Association and local organizations like People for Community Recovery, a grassroots environmental justice organization on Chicago’s Southside, are also part of the coalition that sent the letter.

Illinois, especially Chicago, is a freight hub thanks to its central location and highway system, one of the largest in America’s interstate system. Many of the neighborhoods in the most-trafficked parts of the city are largely made up of people of color and low-income families. The top 12 counties impacted by diesel pollution in Illinois are among the top 9 percent in the nation. Dupage and Cook counties, where Chicago sits, are in the top 1 percent.

According to the letter, diesel trucks in Illinois make up most of the nitrogen oxide pollution that turns into smog and particulate matter. These trucks also emit more than a third of the greenhouse gases from on-road vehicles.

“The air pollution is inescapable. It’s right there. It’s not like you can go hide from it,” said Ukoha.

During a press conference Wednesday, Ukoha highlighted the health risks that particle pollution and ozone pose, including premature births and heart and lung disease. “Health equity and environmental justice must drive policy to protect communities that bear the greatest burden from toxic truck pollution,” he said.

The impact of this pollution is not distributed evenly within the counties. Communities mostly made up of people of color have a shorter life expectancy than those in majority-white neighborhoods in the same county.

“It’s not like this is somebody who is coming across this problem because they’re inhaling fumes from the exhaust of a truck sitting in their mechanic shop or something,” said Ukoha. “No, these are people who are just absolutely going about their lives living in an area that’s polluted with particulate matter from pollutants in the air.”

In the letter, advocates urge the governor to sign a memorandum of understanding to support truck electrification and eliminate toxic air pollution from medium- and heavy-duty trucks and buses by 2050. At least 15 other states and Washington D.C. have signed on to the memorandum.

They are also calling for the governor to adopt two rules that would apply to truck manufacturing in Illinois. One of them, the Advanced Clean Trucks rule, would work toward making all new trucks and buses sold zero-emission by 2050. It would take effect two years after it is adopted.

The other rule they call for is the Heavy-Duty Omnibus rule, which would require nitrogen oxide and particulate matter emissions to be 90 percent lower than the current federal standard. At least nine other states have already adopted or are in the process of adopting the rules.

More than 130 Illinois health professionals and 80 organizations signed the letter. The governor’s office did not respond to Inside Climate News’ request for comment.

“While we understand that freight is an important part of the Chicago metropolitan area economy, there are significant negative consequences that primarily impact Black and brown communities across the state,” said Jose Acosta Cordova, a senior transportation policy analyst at the Little Village Environmental Justice Organization, a nonprofit organization in Southwest Chicago.

Adopting these rules in a freight hub like Chicago could significantly bring down transportation emissions, said Devin Cooley, campaign manager for Neighbors for an Equitable Transition to Zero-Emission, an Illinois Clean Jobs Coalition campaign aimed at reducing harmful diesel pollution. “Other states with major ports, like New York, New Jersey and California, have already adopted these rules and are kind of looking now to Illinois.”

“We just want clean air to breathe for each other and our loved ones,” said Cooley. 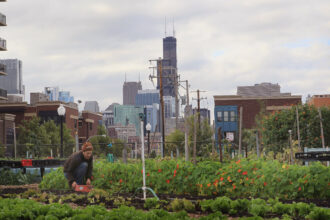 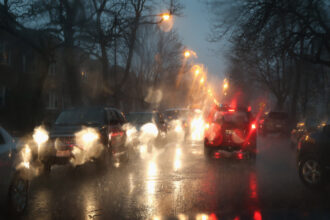