There will be a lot on the line in a few weeks when Enbridge Inc. hits the start button on its new 6B oil pipeline across southern Michigan.

The company is banking on the line to more than double the amount of oil it pumps from Griffith, Ind., to Sarnia, Ontario, Canada.

Residents along the pipeline’s 285-mile path also have a stake in the project. They’re counting on it to be safer than the old 6B that it replaces—the one that spilled more than a million gallons of oil from Canada’s tar sands region into Michigan’s Kalamazoo River in 2010.

“We have to live with the pipeline and all of the what-ifs,” said David Gallagher, who lives in the town of Ceresco. “We hope everything is going to be everything they say it will be, but we just don’t know.”

The new line runs just 14 feet from Gallagher’s house, so close that Enbridge had to take special precautions to make sure his foundation wasn’t damaged during construction. Gallagher captured dramatic video of huge pieces of equipment rumbling by his living room windows.

MORE: If 50 Tons of Pipe Falls From a Crane, Does Anyone See It?

The $1.3 billion pipeline follows the same path as the 46-year-old pipe it replaces and crosses more than 100 wetlands, streams and rivers. Enbridge plans to open the 235-mile section from Griffith to Ortonville, Mich. on May 1. The final 50-mile segment is expected to open by early fall.

The old 6B has been operating below its 240,000-barrel a day capacity since the accident. The new line can carry 500,000 barrels a day of crude, including Canadian bitumen, a heavy oil that must be thinned with conventional light crude or a cocktail of natural gas liquids so it can be pumped through pipelines.

The National Transportation Safety Board blasted Enbridge in 2012 for a “complete breakdown of safety” in the Kalamazoo spill. The Department of Transportation imposed a record $3.7 million civil penalty on the Canadian company.

Enbridge spokesman Larry Springer said the company’s operation protocols have been revised since the accident and reviewed by federal agencies. The company has built a new control center in Edmonton, Alberta to help it better monitor its pipelines. Additional personnel have been added to bolster the company’s technical support, engineering and operator staffs, he said.

“Enbridge is part of an energy pipeline industry that is committed to the highest safety standards in the construction and operation of our facilities,” Springer said in an email to InsideClimate News.

Leaks can occur on even newly built pipelines, but they are usually less serious than the one that occurred on the old 6B, which was plagued by hundreds of defects for years before it finally ruptured, said Carl Weimer, executive director of the Pipeline Safety Trust, a nonprofit watchdog organization.

“When new pipelines fail, it tends to be because of leaky gaskets, a valve that isn’t tightened properly,” he said. “They are not major failures. But there tends to be a number of little things.”

For instance, the first Keystone pipeline—which opened in 2010 and runs from Hardisty, Alberta to Patoka, Ill.—leaked 12 times in its first year of operations. The Keystone is owned by TransCanada, another Canadian company. TransCanada is hoping to build another pipeline—the controversial Keystone XL—which would also bring Canadian tar sands oil into the United States.

After the Kalamazoo spill, the federal Pipeline and Hazardous Safety Administration (PHMSA) ordered Enbridge to take new precautions before it re-opened the line. PHMSA spokesman Damon Hill said that order led to the line’s replacement.

Hill said PHMSA has invested significant resources in making sure that the new pipeline is in accordance with safety regulations and best practices. Since 2012, PHMSA inspectors have spent 144 days in the field on the project, overseeing welding, coating, installation, backfilling, testing and other construction activities, he said.

MORE: What It’s Like Living Within Feet of a Pipeline’s Construction

Beth Wallace, an outreach consultant for the National Wildlife Federation, said that while the new pipeline is an improvement, she is disappointed that PHMSA allowed it to be built before new federal safety standards were in place.

In 2010, Congress directed PHMSA to examine its pipeline safety regulations and develop expanded integrity management standards and require new safety measures where necessary. Many of those rules haven’t yet been finalized.

“There has been very little progress made toward strengthening rules and regulations since the spill four years ago,” Wallace said. “So allowing them [Enbridge] to nearly double the size of their pipeline before critical rulemaking comes out of PHMSA is putting the cart before the horse.” 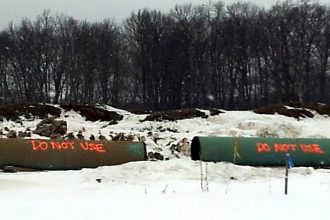 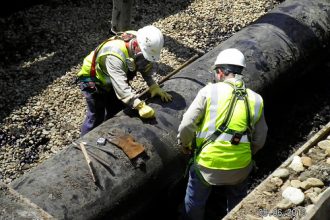