To see why environmentalists have been panicking about the new direction of the Supreme Court, just go back 11 years and read the two dissents in the landmark climate change case Massachusetts v. EPA.

Not the majority opinion, where Justice Anthony Kennedy provided the fifth, swing vote compelling the Environmental Protection Agency to regulate greenhouse gases as pollutants under the Clean Air Act. In the opening words of the ruling, the liberal wing of the court, joined by Kennedy, embraced the science of climate change.

No, what sends shudders down the spines of environmental advocates is the way the deeply conservative minority saw things back then, spelled out in a pair of dissents—one written by Chief Justice John Roberts and the other by the late Justice Antonin Scalia, whose seat President Donald Trump filled last year with Neil Gorsuch. Both dissents were also joined by Justices Clarence Thomas and Samuel Alito.

Where would Trump’s new nominee, Brett Kavanaugh, fit into this court if he is confirmed to replace Kennedy, who is retiring?

The dissents are hostile to an expansive view of EPA’s powers under the Clean Air Act, but more profoundly, they are out of step with the core scientific understanding of global warming.

For environmentalists, it’s worrisome that the court is increasingly prone to make decisions under one of Scalia’s core beliefs, known as “textualism,” which would see no climate role for the agency in charge of protecting the environment unless it is expressly spelled out in statute. Congress, especially under the control of Republicans, doesn’t look likely to crack down on pollution from the use of fossil fuels, whatever the risks to society.

And it’s a nightmare to think that a new majority on the court might turn it into a sounding board for outright climate denial.

Roberts started off his dissent by stating that he would render “no judgment on whether global warming exists, what causes it, or the extent of the problem.” But his framing of the question of standing—the threshold test of whether Massachusetts and other states even had the right to press their case in court—was out of step with the science.

On coastal damages from sea level rise, an eventuality that is not just a risk but a certainty, readily observed and directly caused by the warming of ocean waters and the melting of ice masses due to rising carbon dioxide, Roberts wrote: “It is pure conjecture.”

As for strengthening controls on the greenhouse gas emissions from new cars, one of the main sources of carbon pollution and the focus of the litigation, their tailpipe fumes played only a “bit-part” in causing the problem, he said.

His point was that to even get their day in court, plaintiffs had to prove that a specific harm to them (coastal damage) had to be right around the corner (not decades away) and had to be knotted to a single act of regulatory neglect (lax auto standards).

Not even justice should be that blind.

It is well established that sea level rise is just one of the myriad dangers presented to public health and the environment by the unregulated use of fossil fuels. In the context of climate science, a century is the blink of an eye. And the moment EPA ruled that CO2 was a dangerous pollutant, not only the science but the law tells the federal government to control emissions from all significant sources, not just new cars.

Next, take a look at the other dissent, written by Scalia—a judge who conservatives consider the archetype for the next nominee to the high court.

Most of it is taken up by Scalia’s brand of textualism, a contorted, dictionary-driven defense of the notion that man-made carbon dioxide is not even pollution.

“Regulating the buildup of CO2 and other greenhouse gases in the upper reaches of the atmosphere, which is alleged to be causing global climate change, is not akin to regulating the concentration of some substance that is polluting the air,” he wrote.

What This Could Mean for Future Rules

“Justice Scalia had already begun to lay the groundwork for curtailing EPA’s power to regulate greenhouse gases in a subsequent case, Utility Air Regulatory Group v. EPA,” she wrote. (There, the court upheld EPA rules on some sources, but said the agency had overreached on others.)

“With a new Justice on the Court who opposes Mass. v. EPA, it isn’t hard to imagine the Court imposing significant limitations on EPA’s ability to regulate greenhouse gases,” she went on. “If a Democrat were elected President in 2020 and attempted to reinstate something like the Clean Power Plan, for example, we could well see the Supreme Court strike such a rule down.”

She found it “even more alarming” that Alito and Thomas wanted to undo Massachusetts v. EPA at that point. “Add Justice Gorsuch and the new Justice, persuade Justice Roberts to join in, and Mass. v EPA is overturned.”

Richard Lazarus of Harvard told The Atlantic that Kennedy’s absence might affect environmental law across the board. “He’s been on the court just over 30 years, and he’s been in the majority in every single environmental case but one. You don’t win without Kennedy,” he said.

Even knowing the name of Trump’s nominee to replace Kennedy, it’s hard to predict more, other than that the court that ultimately decides the fate of the Clean Power Plan will lean even more to the right than the one that, just before Scalia died, issued a stay of that regulation.

Ever since the stay was issued, the litigation has been in limbo, although it looks like judicial patience is running out at the U.S. Court of Appeals for the District of Columbia Circuit, which held oral arguments almost two years ago.

Among the judges on that appellate bench was Kavanaugh. (For that reason, he might have to recuse himself at the Supreme Court, depending on how the case plays out.)

Here’s one of his comments that day, as reported by The New York Times:

“The earth is warming,” Kavanaugh said. “Humans are contributing. I understand the international impact and the problem of the commons. The pope’s involved. And I understand the frustration with Congress.”

But he echoed Chief Justice Roberts’ thinking when he went on: “If Congress does this, they can account for the people who lose their jobs. If we do this, we can’t.”

Those words could resonate with pro-coal senators like Joe Manchin of West Virginia and Heidi Heitkamp of North Dakota, two of the nervous Democrats whose votes might be needed for his confirmation.

And knowing what a weak hand the greens hold in Congress, it’s easy to see why climate activists are walking around with furrowed brows. 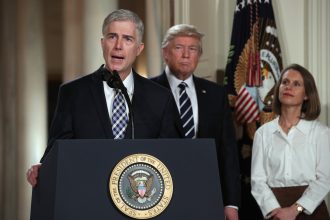