As the second hurricane in four weeks headed for the Southeast, Mike Belch was driving a tractor across a North Carolina peanut field, racing to bring in his crop ahead of the rain.

His farm had survived the ravages of the recent Hurricane Florence—which caused at least $1.1 billion in farm losses in North Carolina alone according to state estimates and killed more than 40 people. But now, Hurricane Michael was threatening to dump several inches of crop-wrecking rain across the already soggy region.

“This one is coming exactly at the wrong time,” Belch said. “Everybody is in the middle of harvest right now.”

The storm exploded from a tropical depression to a major hurricane in two days, fueled by unusually warm waters in the Gulf of Mexico, and made landfall near Panama City, Florida, on Wednesday afternoon as an extremely dangerous Category 4 with 155 mile per hour winds. Scientific research has shown that the frequency of the most intense tropical storms is increasing and that global warming caused by the heat-trapping gases humans release from activities like burning fossil fuels can exacerbate extreme weather and contribute to sea level rise that worsens storm surges.

A large swath of the Southeast was in the path of Michael’s heavy rain, according to forecasts.

Florida was also facing a storm surge, forecast to be over 9 feet in some areas, that threatened as many as 50,000 coastal properties, according to a Union of Concerned Scientists analysis. The National Weather Service office in Tallahasse called the hurricane was a potentially catastrophic event “not comparable to anything we have seen before.”

The Greenville-Spartanburg, South Carolina, National Weather Service office issued what it described as its first tropical storm watch and warning for the northwest part of the state and warned of flash flooding. Georgia, like Florida, was under a state of emergency.

North Carolina Gov. Roy Cooper called it an extremely dangerous storm that he said was likely to be costly—especially for agriculture.

Across large parts of North and South Carolina, the soil was still saturated from Hurricane Florence. A lot of tobacco and cotton farms had been wiped out by Florence, along with millions of chickens and thousands of hogs. Now, peanuts and sweet potatoes are at risk, Cooper said. He also warned of potential flash flooding and urged residents to not let their guard down.

“We don’t need any more rain right now,” he said.

The National Climate Assessment in 2017 found an upward trend in Atlantic hurricane activity since the 1970s. It concluded that the relative contributions of human and natural causes remained uncertain but projected that hurricane-associated storm intensity and rainfall would increase as the climate continues to warm.

That’s what scientists have been seeing, said Jill Trepanier, an assistant professor at Louisiana State University who studies extreme weather including hurricanes. She said unusually warm water in the Gulf of Mexico has fueled Michael’s intensity.

“Hurricanes essentially get their strength from warm water,” Trepanier said. And right now, she said, the Gulf of Mexico is up to 2.5 degrees warmer than normal for this time of year.

Michael’s rapid intensification from essentially a thunderstorm to a powerful hurricane in a couple of days “has a lot to do with the heat energy that is out there now,” she said.

And like other recent hurricanes—and other kinds of storms—Michael is holding a lot of moisture that threatens to produce very heavy rains.

“When it rains, it rains harder. There is just more water content in the atmosphere,” Trepanier said. “All the things we have been saying for the last five to ten years are now starting to showcase themselves on a relatively frequent basis.”

Agriculture, an economic powerhouse in North Carolina, was “devastated” by Florence and is now in need of a financial rescue or farmers will face bankruptcy, Cooper said.

North Carolina Commissioner of Agriculture Steve Troxler said in a news conference that the recovery from Florence would take farmers “a very long time.” Michael “will add insult to injury.”

Belch, president of the North Carolina Peanut Growers Association, said peanut farmers were rushing to get their crops out of the ground and harvested before Michael’s rainfall could ruin them. And even more cotton could be lost to wind and rain.

“You have a narrow window,” he said.

South Carolina was worried about the same crops—cotton and peanuts, said Nathan Smith, a Clemson University extension professor in agribusiness. Some cotton is ready for harvest now, and it can’t be saved if the cotton gets too damaged by wind and rain.

He said Clemson researchers were still trying to document crop losses from Florence because it’s been hard to get to all the farms, with some roads still closed by flooding even as late as last week.

“We’ve had a rough run for the last three years,” with record flooding in October 2015 associated with Hurricane Joaquin that dumped more than 20 inches run some parts of South Carolina, followed by crop damage from Hurricanes Matthew and Irma in 2016, and then Florence this year.

“With low prices, coupled with these events, it’s got folks thinking about the future,” Smith said, adding that some farmers and agriculture professors are worried how they can stay in business.

With disasters piled onto disasters, he said, “farms are eating up their equity.” 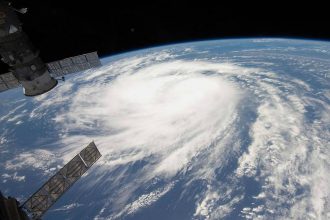