Torrential rainfall from Hurricane Florence, a storm described as “epic” by North Carolina Gov. Roy Cooper, is showing how ill-prepared large parts of the Carolinas are for extreme weather worsened by climate change.

More than 1,200 roads flooded to the point authorities were telling motorists to avoid North Carolina entirely. The port city of Wilmington took a direct hit from Florence and essentially became an island, leaving officials scrambling for fuel to keep the water treatment plant running while a nearby sewage treatment plant spilled millions of gallons of waste into the Cape Fear River. Neighborhoods in several river towns were inundated by record flooding, 16 drinking water systems and seven sewage systems were out of service, and access to one nuclear plant that had been shut down was largely cut off, prompting an emergency declaration.

As overflowing rivers crest and the water starts to subside, the region will also have to contend with hazardous waste spread by the floodwater from inundated coal ash sites, hog waste lagoons and other factory farms that dot the region.

Clean-water advocates who surveyed the state by plane after the hurricane’s strongest winds had passed documented two breaches in a coal ash landfill at Duke Energy’s L.V. Sutton plant near Wilmington, and found that giant ash piles near a power plant in another part of the state had been overcome by floodwater. They spotted dozens of hog farms with waste lagoons under water. One poultry company estimated that 1.7 million of its chickens had drowned and said its farmers hadn’t been able to reach millions more.

“Our riverkeepers are reporting flooding of Biblical proportions at historic levels,” said Donna Lisenby, a global advocacy manager for the Waterkeeper Alliance. “The rivers are going to see more impacts than ever before. That means more dead chickens and more dead hogs than ever before.”

[Update: By Friday, rising flood water had breached the dam between the Sutton plant’s large cool lake and the Cape Fear River. The Sutton site has two coal ash basins, and flooding was carrying lightweight coal combustion debris containing silica and aluminum oxide from one submerged basin into the lake and the river, Duke Energy reported. The company said it did not yet see any coal ash in the lake.]

A group of scientists that crunched preliminary numbers on the storm and the impact of climate change estimated that its extreme rainfall and size were significantly larger because of global warming. Both the rainfall and size of the storm have factored into Florence’s large impact on several states. At least 37 deaths had been blamed on the storm by Tuesday evening, including one toddler swept from his mother’s arms.

North Carolina was already well aware of the risk posed by hog waste lagoons. During Hurricane Floyd in 1999, 46 waste lagoons in the state failed, releasing millions of gallons of waste that contaminated tributaries of the Cape Fear, Neuse and Tar rivers, according to the group Environment America. In 2016, Hurricane Matthew caused 14 waste lagoons to fail, the group said.

Poultry farms, where chicken manure and urine contains ammonia and other pollutants, have also been inundated by Florence. Sanderson Farms reported Monday that 60 of its broiler houses had flooded, killing an estimated 1.7 million chickens, and it said it hadn’t been able to reach 30 other farms. The North Carolina Department of Agriculture reported Tuesday that at least 3.4 million chickens and turkeys and 5,500 hogs had died in the storm in that state.

Michael S. Regan, North Carolina’s top environmental regulator, said that the state Department of Environmental Quality had also received reports of spills at five hog waste lagoons in three counties north and west of Wilmington and that state inspectors would visit those and any others as soon as travel became safe.

The U.S. Environmental Protection agency said in a written statement that it would also work with state officials to check drinking water intakes due to possible releases of waste from pig farms.

Under Florence’s deluge, the side of one Duke Energy coal ash dump near Wilmington gave way, flushing some of the coal-burning waste with its toxic heavy metals toward Sutton Lake, the power plant cooling lake, which is also a popular fishing destination. A Duke spokeswoman, Paige Sheehan, said it was possible that some ash from that collapse had reached the lake.

“The situation at the landfill is stable and repair work has already begun to address the erosion we experience during 30 inches of rain,” Sheehan said.

Another coal ash site—at Duke’s Lee plant in Wayne County, North Carolina—was inundated next to the Neuse River, she said.

In South Carolina, Santee Cooper was working to protect about 200,000 tons of coal ash still at its decommissioned Grainger Generating Station near Conway as water rose in the adjacent Waccamaw River.

The company said it was pumping water into the ash ponds to balance the pressure of the river rising on the other side of the dikes, and it said it had inflatable dams and large bags of gravel ready to deploy like sandbags if the dikes broke. It also told Gov. Henry McMaster, in letter obtained by the Post and Courier, that if river flooding forecasts turned out to be accurate, the river would overtop the dikes, increasing the risk of a breach.

Rising floodwaters and fallen trees also limited access to Duke’s Brunswick nuclear power plant. Following Nuclear Regulatory Commission rules, Duke declared a “hazardous event” emergency, the lowest level of nuclear emergency. NRC spokesman Joey Ledford said the plant, about 30 miles south of Wilmington, had been safely shut down and was in good condition, with staff inside monitoring it, and not in danger of flooding.

On the coast, Wilmington was essentially turned into an island over the weekend until emergency crews were able to make way on one route for a military convoy. On Monday, it brought in enough food rations and water to supply 60,000 people for four days.

Mayor Bill Saffo begged people who had taken the city’s advice to evacuate ahead of Florence to stay away until roads could be cleared and bridges checked.

“Please stay where you are, where you have food, water and shelter,” he said Monday, adding that the storm had produced “probably the most significant flooding event this state has ever seen.” The Cape Fear River and other rivers were still rising in parts of the state.

On Sunday, the Cape Fear Public Utility Authority put out an urgent notice that it was running out of fuel to keep its drinking water plant operating. “We will not be able to continue water service for public health and safety such as fire suppression and other life-sustaining activities,” the utility said. The agency found a source of fuel but still recommended customers keep bathtubs full of water just in case.

The same utility reported that more than 5 million gallons of partially treated sewage had spilled into the Cape Fear River during a power failure at a treatment plant. An EPA official said other sewage systems had been overwhelmed and were overflowing. In all, the agency reported Tuesday that 16 drinking water systems and seven sewage treatment systems in North Carolina were out of service.

North Carolina’s governor took a couple of minutes to reflect on whether Florence might result in new thinking in the state about how it can become better prepared to deal with hurricane storm surges and flooding. The state had drawn criticism when the state’s legislature in 2012 blocked state-level planning for sea level rise, though that didn’t stop cities and counties from acting.

“We are going to have to be smart about our recovery and long-term planning,” said Cooper, who has joined other governors and mayors in supporting the Paris climate agreement.

North Carolina will need to find ways to better mitigate flooding, including buying out flood-prone properties, he said, then quickly changed the topic back to Florence. Now, he said, “our immediate concern is pulling people out of the water.” 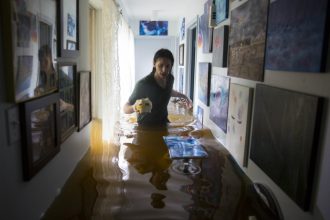