California proposed new regulations to curb methane from the oil and gas industry last week, adding momentum to a state and federal push to reduce emissions of the powerful greenhouse gas.

If enacted, California’s rules would be the strongest in the country, outpacing similar efforts from the Obama administration and several other states, said Dan Grossman, an expert on state oil and gas programs at the Environmental Defense Fund.

The regulations would require regular inspections for leak detection and repair, and apply to many parts of the supply chain including storage facilities, processing plants, wellheads and related equipment.

The rules for underground storage are particularly important, given the ongoing leak at the Aliso Canyon storage facility in Los Angeles. The leak, now spewing methane for three and a half months, prompted the evacuation of thousands of residents, mostly from the affluent Porter Ranch neighborhood.

David Clegern, a spokesman for the California Air Resources Board (the agency behind the proposed rules), said the methane released so far from Aliso Canyon is equal to half a percent of the state’s annual greenhouse gas emissions.

Clegern said the new methane rules weren’t inspired by Aliso Canyon. They’ve been in the works for years, he said, and grew out of AB32, California’s landmark climate change law that passed in 2006.

“California’s announcement is exciting,” Grossman said. He believes the new rules will cause other states and the federal government to “sit up and take notice.”

But Grossman said the news also points to the need for comprehensive national rules. Many states with significant fossil fuel development—including Texas and Oklahoma—haven’t taken steps to account for  methane, he said.

Environmentalists and regulators are increasingly worried about methane, the main component of natural gas. The short-lived climate pollutant is 86 times more powerful than carbon dioxide over 20 years, and 34 times more powerful over a 100-year time period.

Two years ago, Colorado became the first state in the country to adopt regulations targeting methane from the oil and gas industry. The Environmental Defense Fund played a large role in shaping those rules.

Wyoming and Ohio later issued their own state regulations. Unlike Colorado’s, their rules aim to reduce emissions of volatile organic compounds and other toxic gases present in trace amounts in raw natural gas. But methane and VOCs often leak out of the same facilities, Grossman said, so reducing toxic gas emissions also cuts methane.

In late January, shortly before California published its draft methane rules, Pennsylvania Gov. Tom Wolf announced a four-point plan to tackle methane in his state. As in Colorado and California, Pennsylvania’s regulation would apply to new and existing natural gas facilities.

In contrast, proposed rules from the U.S. Environmental Protection Agency would  cover only new or modified natural gas infrastructure. Environmentalists say it’s a critical weakness in the EPA’s attempts to curb methane.

Another federal agency, the Bureau of Land Management, announced separate methane regulations last month. The rules apply only to oil and gas facilities on federal and tribal lands, but they cover both new and existing sources.

Grossman said the EPA needs to strengthen its regulations. In January 2015, the Obama administration announced a goal of reducing methane from oil and gas production 40-45 percent by 2025 (compared to 2012 levels). That’s simply not possible given the current pledges from the EPA and BLM, Grossman said.

An EPA spokeswoman said the agency received more than 900,000 public comments about the regulations. She said the EPA is reviewing the feedback and plans to release final rules this spring. 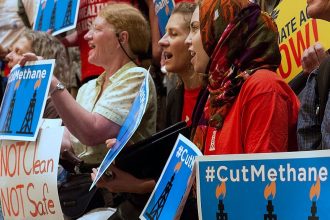