After years of battling Canadian pipeline giant TransCanada over the controversial Keystone XL pipeline, Nebraska rancher Bob Allpress is taking an unusual step to protect land that has been in his family since 1886.

In the coming weeks, Allpress plans to install solar panels in the middle of a 1.5-mile long strip of land, a proposed pipeline route that bisects his 900-acre ranch—and that TransCanada has threatened to take by force through a legal process known as eminent domain.

“Not only would they have to invoke eminent domain against us, they would have to tear down solar panels that provide good clean power back to the grid and jobs for the people who build them,” Allpress said.

The project, known as “Solar XL,” is the latest example in a growing number of demonstrations against pipelines where opponents festoon proposed corridors with eye-catching obstructions. Nuns recently built a chapel along the path of a proposed natural gas pipeline that would cross their property in Pennsylvania. Last year, pipeline opponents built a replica of the cabin belonging to Henry Thoreau, one of the environmental movement’s founding fathers, along another proposed natural gas pipeline route in Massachusetts.

Allpress, who, along with his brothers, raises corn, alfalfa and cattle on their ranch along the Keya Paha River in north central Nebraska, is one of several landowners who plan to install solar panels along the pipeline route with help from advocates opposed to the pipeline. The panels will provide solar power to the landowners, with any excess production intended to go into the electric grid.

“It’s critical when we are fighting a project like KXL to show the kind of energy we would like to see,” said Jane Kleeb, a Nebraska resident and president of Bold Alliance, one of several environmental and Native advocacy groups behind the project.

Though largely symbolic—each installation would consist of roughly 10 panels—the solar projects provide a clean energy alternative that doesn’t require land seizure or pose a risk to the environment.

Eminent domain allows the government or private companies to take land from reluctant owners who are paid fair market value. The proposed project must benefit the public; something that landowners and environmental advocates argue is not the case with Keystone XL.

The pipeline would carry approximately 800,000 barrels of oil per day from the Alberta tar sands in Canada to Steele City, Nebraska, where it would connect with the existing Keystone pipeline. The project was blocked by the Obama administration in 2015 only to be revived in January as one of Trump’s first acts as President.

Nebraska’s Public Service Commission is scheduled to hold a formal, legal hearing on the pipeline starting on Aug. 7. The commission will rule whether to approve or reject the proposed route within the state of Nebraska following the hearing.

Allpress, who along with other landowners will testify in opposition to the pipeline, hopes state regulators will put a halt to the project or reroute it somewhere where leaks would pose less risk to freshwater aquifers.

“We have five potable water wells that provide water to the cattle and our own drinking water,” Allpress said. “If the pipeline breaks, it would take out us and people all the way down to the Missouri River.” 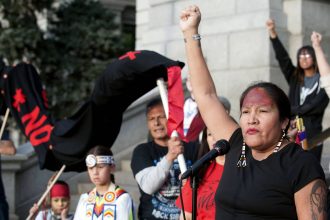 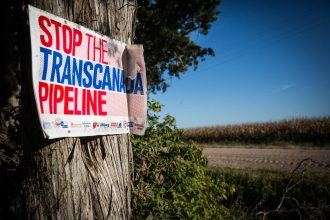