Six years ago, the nation’s largest organization of physicists released a policy statement on climate change that hedged on both the causes and potential impacts of global warming.

In the statement, the American Physical Society said it supported action to reduce greenhouse gases, but the text included equivocal phrases such as “natural sources of climate variability are significant,” and “the magnitudes of future effects are uncertain.”

On Wednesday, the society of 50,000 physicists adopted a new policy without any such caveats.

“Multiple lines of evidence strongly support the finding that anthropogenic greenhouse gases have become the dominant driver of global climate warming observed since the mid-twentieth century,” said the new statement, approved unanimously at a virtual meeting of the APS 42-member policy-making council.

The more robust APS climate statement comes as this year’s United Nations climate talks near their conclusion in Glasgow, and Congress is poised to act as early as next week on President Joe Biden’s climate plan.

The new language also arrives just a month after the Nobel Prize in physics was awarded to three physicists whose work became a foundation for science’s understanding of climate change: Syukuro Manabe, a senior meteorologist at Princeton University, Klaus Hasselmann, an oceanographer and professor emeritus at the University of Hamburg; and Giorgio Parisi of Sapienza Università di Roma, Italy. Their work helped explain and predict complex forces of nature, showing how reliable climate models could be developed despite the apparent disorder of weather systems, and how human influences could be identified in a system also affected by natural forces.

“Physicists have been essential to advancing our understanding of the climate system and humanity’s impact on it,” said Sylvester James Gates, director of the theoretical physics center at Brown University, who took over as APS president earlier this year. “With this new statement, APS renews its call for sustained research in climate science and actions to reduce greenhouse gas emissions.”

Instead of offering a vague timeline of “the next few decades” for critical action, as it had in its 2015 statement, the APS stressed the urgency of the climate crisis. “The potential consequences of climate change are great and the actions taken over the next decade or two will determine human influences on the climate for centuries to millennia,” the new statement said.

It’s not clear that the scientific society’s statement or the Nobels will have an impact on decision-making by climate negotiators or U.S. lawmakers. But physicists said that they hope the developments together may help put to rest a persistent notion that the discipline of physics is not engaged on the issue of climate change—or worse, that it is at odds with the consensus.

“The climate problem at its heart can be understood through basic physics—radiation, greenhouse gases, and so on,” said John Bradley Marston, a physics professor at Brown University and past APS fellow who specializes in climate science. “So, to my surprise, it comes as a surprise to many people in the public and even some scientists that physics has anything to say about this.”

The APS came out with its first statement on climate change in 2007, following other major U.S. science organizations like the American Geophysical Union and the American Association for the Advancement of Science. Critics within the society immediately took issue with its language, in particular wording that the evidence for global warming was “incontrovertible.” Some physicists argued this amounted to an unscientific assertion that the evidence could not be questioned.

A group of outspoken climate contrarians and physicists went further, organizing an unsuccessful campaign to get the APS to repeal its statement. William Happer of Princeton University, who later worked in the Trump White House and the late S. Fred Singer, a former space scientist who later in life took up advocacy against regulation of tobacco and fossil fuel emissions, were among those who led the effort, which they detailed in a letter published in Nature in 2009.

The next APS review and revision of the society’s climate statement also stirred controversy before its release in 2015. Steven Koonin, a theoretical physicist at New York University and former BP chief scientist, headed up the review panel, but he resigned when his proposed wording was rejected by the other members. Koonin later published his own statement as an editorial in The Wall Street Journal: “Climate Science is Not Settled,” an idea he expanded on in a book published earlier this year.

Marston said he believes the influence of the climate contrarians in physics is fading, in part because of the strong statements the society has made. “That’s why perhaps some of them fought so hard against the original APS climate statement,” he said.

Since then, the APS has taken a number of steps to put its stated concerns about climate change into action. The society this year organized a campaign urging its members to call and email members of Congress in support of legislation that earlier this year overturned the Trump Administration’s rollback of regulations on the potent greenhouse gas methane.

In 2017, APS became the first U.S. scientific society to publish an inventory of its own greenhouse gas emissions, and it has taken steps to reduce them.

The revised statement is the result of a periodic review process APS has for all of its public policy statements. The APS Panel on Public Affairs drafted the initial revision with input from its energy & environment subcommittee, and circulated the language to the entire membership this past summer for a one-month comment period. The APS is the second-largest organization of physicists in the world, behind Deutsche Physikalische Gesellschaft of Germany.

As in its previous climate change statements, the APS urged sustained research on climate change. But drawing heavily from the scientific assessments of the Intergovernmental Panel on Climate Change in 2018, 2019 and 2021, the society changed its characterization of the remaining uncertainties in climate science. In place of a previous sentence on the scientific challenges in our abilities “to observe, interpret, and project climate changes,” the APS now points to the challenges in our abilities “to project, adapt to, and mitigate anthropogenic climate change”—indicating that the greatest remaining uncertainties pertain to solutions.

Marston said he hopes that the APS statement and the announcement of the Nobel prizes  encourage more young physicists to take up research in climate science.

“There are purists who think that if you’re not doing string theory, or quantum many-body physics or something like that, it isn’t real physics, but I don’t agree with that,” said Marston. He pointed, for example, to the intellectual challenge involved in incorporating factors like small-scale air and ocean turbulence into climate models, requiring the science of statistical mechanics, fluid mechanics, radiation theory and more.

The work underway now on such problems builds on the pioneering science honored last month with the Nobel Prize in physics. When Manabe published his work in the 1960s, he was the first researcher to explore the interaction between radiation balance and the vertical transport of air masses due to convection, also taking account of the heat contributed by the water cycle. Today, Marston said, physicists working on climate models are grappling with how to account for processes that take place over areas smaller than one square kilometer, the current resolution of the best models.

After hearing he would share in the Nobel, Manabe told the Associated Press that his work in the 1960s building the first model predicting climate change was “1,000 times” easier than getting the world to do something about it. 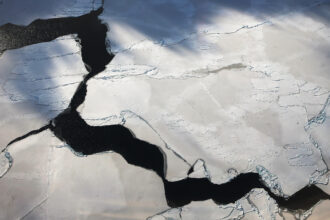 New Research Explores the Costs of Climate Tipping Points, and How They Could Compound One Another