Under pressure from investors, prosecutors and global regulators, ExxonMobil Corp. agreed on Monday to strengthen its analysis and disclosure of the risks its core oil business faces from climate change and from government efforts to rein in carbon dioxide emissions from fossil fuels.

That will require Exxon to face squarely the implications of reduced oil demand if the world makes good on the pledges of the Paris climate agreement to cut carbon emissions practically to zero fast enough to avoid the worst effects of global warming.

In a one-paragraph filing to the Securities and Exchange Commission, the oil giant said it would stop resisting motions filed by dissident shareholders seeking this kind of risk disclosure. Over the past few years, more shareholders have sided with the dissidents, who have included descendants of the founding Rockefeller family, faith and social progress groups and important financial institutions. Earlier this year, 62 percent of shareholders voted for Exxon to annually report climate risk.

Specifically, Exxon dropped its opposition to a shareholder proposal filed Nov. 28 by New York’s state pension fund. The proposal asks Exxon to analyze how the Paris goal of keeping global temperature rise below 2 degrees Celsius compared to pre-industrial levels will affect its business and to assess the financial risks associated with that 2-degree scenario.

“Exxon’s decision demonstrates that investors have the power to hold corporations accountable and to compel them to address our very real climate-related concerns,” said New York State Comptroller Thomas P. DiNapoli, who oversees the nation’s third-largest public pension plan, with $192 billion in assets.

“We will continue to monitor Exxon’s response to climate change as we urge the company, and others in the energy sector, to find ways that they can adapt to the growing lower carbon economy,” DiNapoli said.

Exxon told the SEC that it “will seek to issue these disclosures in the near future. These enhancements will include energy demand sensitivities, implications of two degree Celsius scenarios, and positioning for a lower-carbon future.”

Tim Smith, senior vice president of Boston-based Walden Asset Management, praised Exxon’s decision to drop its public opposition to the shareholder request but noted that its SEC statement was short, “unusual” and thin on details about how Exxon would follow through.

“It is hard to know if Exxon will provide a meaningful analysis as requested in the resolution,” Smith said.

Arjuna Capital planned to refile a shareholder proposal on Tuesday, along with the shareholder advocacy group As You Sow, asking Exxon to spell out how it will adapt its business plan to climate risks facing the industry.

“For so long, the company has skated by on a culture of denial and assertion that business as usual will continue into perpetuity,” Arjuna Capital Managing Partner Natasha Lamb said. “The science says ‘no, ‘and investors are saying ‘no—it’s time to change course’.”

It would have been difficult for Exxon to ignore the shareholder vote, said Danielle Fugere, president of As You Sow. “The inevitability of a decarbonizing economy makes it mission critical that Exxon address the risk to its business-as-usual model,” she said. “We hope that Exxon’s announcement signals a fundamental change in the company’s direction on climate change.”

Exxon has “taken a few steps in the right direction” in the year since Rex Tillerson, now U.S. secretary of state, retired as Exxon’s chief executive, said Kathy Mulvey, climate accountability campaign manager at the Union of Concerned Scientists. She noted that Exxon supported keeping the U.S. in the Paris Agreement, appointed a climate scientist to its board, committed to reduce methane emissions, and opposed an American Legislative Exchange Council (ALEC) proposal that would have taken aim at the Environmental Protection Agency’s endangerment finding.

“However,” Mulvey said, “the company is nowhere close to retooling its business model to meet the Paris Climate Agreement goals it purportedly supports.”

Under Pressure from State Investigations

Exxon is also facing pressure from the states. For more than two years, Exxon has been investigated by the attorneys general of New York and Massachusetts for suspected fraud under the states’ financial disclosure and consumer protection laws concerning what it told investors about the company’s risks from climate change. Exxon has vigorously contested these cases in state and federal courts, but has suffered recent tactical setbacks in court.

The state probes began after a 2015 investigative series by InsideClimate News into what Exxon’s own scientists knew decades ago about the risks from climate change and what the company told the public.

By committing to a rigorous review of how Exxon’s business would fare under a global pollution-control regime aimed at keeping warming to less than 2 degrees Celsius—a core goal of the Paris agreement—Exxon is also bowing to powerful international financial pressures.

The 2-degree stress tests were a key recommendation of the Financial Stability Board’s Task Force on Climate-related Financial Disclosures, set up by Bank of England Governor Mark Carney.

A few hours after the Exxon statement was filed, Carney and task force chairman Michael Bloomberg, announced that 237 companies, including 150 financial firms, had publicly committed to support voluntary climate-risk disclosure guidelines being developed by the task force.

“Markets need the right information to seize the opportunities and mitigate the risks that are being created by the transition to a low carbon economy,” Carney said. “This solution, of the market and for the market, is truly entering the mainstream.” 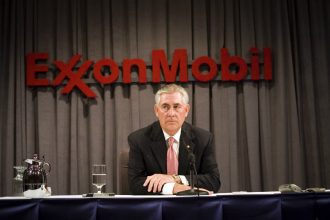