Oil pipeline giant Enbridge, Inc. has agreed to a $75 million settlement with the state of Michigan over the rupture of its line 6B that sent more than a million gallons of heavy crude oil into the Kalamazoo River nearly five years ago.

As part of a sweeping agreement to improve the Kalamazoo River and surrounding wetlands in southwestern Michigan, Enbridge has pledged to dedicate $30 million of the settlement to restore or create 300 acres of wetlands.

That is just one of several projects included in the settlement that the Michigan Attorney General’s Office and the Michigan Department of Environmental Quality (MDEQ) agreed to on Tuesday.

Other projects outlined in the settlement have already been completed and include removing a dam to restore the natural flow to a section of the river and improving access for boating and fishing on the river.

“This is a huge win for Michigan’s environment,” MDEQ Director Dan Wyant said in a prepared statement. “This settlement will mean improved water quality, improved fish and wildlife habitat, and an improved experience for river users in the years to come.”

Brad Wurfel, a spokesman for MDEQ, said the settlement was a twofold success for the state. It not only addressed the cleanup and ongoing monitoring, it also secured funding for projects that enhanced the river’s accessibility

“This resolution gave us the ability to make long-needed improvements along the river in addition to the remediation factors,” he said.

While Michigan officials are praising the settlement, they acknowledge that not all of the more than 1 million gallons of tar sands oil that spilled into the river in July 2010 has been removed and that years of monitoring remain to insure the remaining oil does not harm people or the environment.

That oil remains in small pockets on the river bottom and in some wetlands adjoining the river bank even after Enbridge spent more than $1 billion on cleaning it up.

The settlement requires Enbridge to continue to monitor the river and wetlands and clean up any oil that can be recovered without further environmental damage within the next five years. The company also will continue to pay the state’s costs in overseeing cleanup and restoration of the river.

The spill fouled a 40-mile stretch of the Kalamazoo River near Marshall, Mich. and 4,435 acres of land near the river’s shore.

DuCharme often paddles the river in a kayak or wades barefoot into the squishy river banks to look for signs of oil.

“The river has recovered now to the point that it is near its normal state,” he said.

Birds have returned, fish jump and flop back into the river, and vegetation has returned, DuCharme notes.

“It’s all about making sure the river community continues to heal,” he said.

Rebecca Craven, program director Pipeline Safety Trust, a pipeline watchdog organization based in Bellingham, Wash., said there are few similar cases to use for comparison.

What is clear is that the settlement was not intended to penalize Enbridge, she said.

“As we understand it, this is a settlement on the damages done to watershed resources and is not intended to be punitive, but to try to make the state and its resources relatively whole,” she said.

The timing of the announcement has also raised some questions.

Michigan lawmakers are poised to consider a bill that would exempt information about existing and proposed energy infrastructure that “could be useful to a person in planning an attack” on it from disclosure under the Michigan Freedom of Information Act.

That bill, which has the support of pipeline companies and other utilities, has drawn criticism that it would keep information secret from people concerned about pipeline safety.

So it seems to skeptics like Jordan Lubetkin, a spokesman for the National Wildlife Federation’s Great Lakes Regional Center, and Anne Woiwode, conservation director of the Michigan Chapter of the Sierra Club, the settlement could be a diversion to lure attention away from the pending legislation that would leave companies like Enbridge a little less open to public inspection.

Enbridge, Canada’s largest transporter of crude oil worth an estimated $30 billion,  was blasted by the National Transportation Safety Board in 2011 for a “complete breakdown of safety” in connection with the Kalamazoo spill.

The NTSB criticized the company for failing to make repairs to line 6B despite being aware of defects five years before the rupture, including flaws along the section of pipe that burst open.

Enbridge also was hit with a record $3.7 million civil penalty by the U.S. Department of Transportation.

Although Enbridge has settled with Michigan authorities, the company remains in talks with the Environmental Protection Agency over penalties that could exceed $200 million.

Mike Shriberg, regional executive director of the National Wildlife Federation’s Great Lakes office in Ann Arbor, said it remains to be seen whether the $75 million paid to the state will be enough to fulfill Enbridge’s cleanup responsibility.

He said the settlement is promising because the money is going into habitat protection and restoration projects with direct benefits to Michigan’s wildlife and recreational economy.

“What’s less clear is whether the amount of funding is enough to achieve long-term restoration goals for the river as well as to serve as a sufficient penalty for the economic, social and ecological damages caused,” Shriberg said.

“Time will tell if the settlement with Enbridge Energy will be sufficient to clean up after one of the state’s most calamitous environmental disasters—and whether it is strong enough to deter another one.” 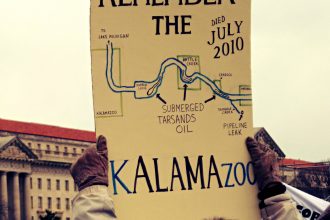 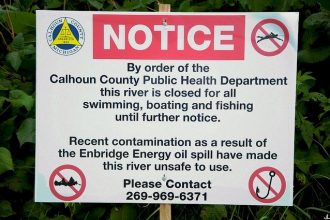 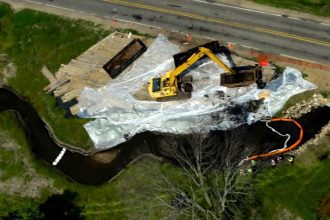 The Mystery of Michigan's Disappearing Dilbit