It’s a cold March morning in Washington, DC, still dark. As I approach Freedom Plaza I spot about a dozen warmly dressed people standing on the east side of the park, and find my contact, Annie Sartor of the Rainforest Action Network. I’m here to see some sort of protest against coal – beyond that I don’t know much.

Until the last minute, Sartor has been reluctant to tell me the exact target of the action. Since it’s a federal agency, there’s concern about security and surveillance. She and her fellow activists have put too much time into this action to have it spoiled by a tip-off to the Federal Protective Service, which handles security at government buildings.

Crossing the street, we head down Pennsylvania Avenue, then round the corner onto 12th Street just as a large rental truck pulls up. The driver lifts open the back of the truck and suddenly everyone is moving at double-speed – pulling 21-foot-long galvanized steel poles out of the truck, grabbing bundles of purple nylon fabric, hauling lengths of chain, and hustling it all onto the front lawn of the US Environmental Protection Agency’s main office building, where 4,000 people come to work each morning.

Within minutes, two immense conical structures take shape: Purple Mountains Majesty. They’re joined by a banner that reads: “Stop Mountaintop Removal.” Each mountain has been scaled by a protester, who is now perched on top. Four more protesters have locked themselves around the bases of the structures. The two teepee-like constructions have occupied vital ground; without a crane or fire engine ladder it would be impossible to remove the protesters without risking injury.

Annie Sartor’s boots click on the sidewalk as she paces back and forth, a cell phone attached to her ear as she briefs a member of the press. “Lisa Jackson wouldn’t come to Appalachia to see the mountains,” she says. “So we’ve brought the mountains to DC.”

Permit from the People

A woman in business attire approaches the protesters and brusquely asks if they have a permit. Nadine Bloch, the designated liaison to the EPA staffers, responds, “Our permit is from the people of Appalachia.”

The locked-down protesters, who have been chatting with friends who showed up to offer encouragement, drinks, and snacks, suddenly stop talking and look toward the street. A van has pulled up on the curb and federal police have removed a large box marked “arrest kit.” I start to wonder how things will play out, and especially how the police will manage to arrest the two activists perched 20 feet in the air. Thirty minutes pass, then an hour, and no arrests are made. Meanwhile, the sun creeps up the sandstone walls of the federal administrative buildings on either side of us, like daytime arriving in a desert canyon.

Pace of Protests on the Rise

Over the past three years, protest actions against coal have become increasingly common, not only in the United States but also in New Zealand, the United Kingdom, Israel, Bangladesh, Canada, South Africa, Italy, Turkey, Poland, Venezuela, Norway, Colombia, India, and Germany. The CoalSwarm Web site, which I coordinate, tracks nonviolent civil disobedience actions against coal around the world. At least 18 such protests took place in 2007, 44 in 2008, and 74 in 2009. The pace of protests continues to increase.

In Australia, scores of small crafts occupied the port of Newcastle, making it impossible for ships to enter the port to load coal for export. At the Denver headquarters of Xcel Energy, citizens staged a die-in to protest the utility’s plan to build a new coal-fired power plant, and in Boulder, Colorado, five protesters were arrested for erecting symbolic windmills on top of a large coal stockpile at the Valmont Power Plant. In the Philippines, residents affected by mining joined fishermen to rally against a proposed coal plant in Saranggani province. Last October, Swedish activists dumped 18 tons of coal outside the offices of state-run Vattenfall Energy, which operates coal plants throughout Europe.

To find another example of this sort of widespread environmental protest, you’d have to go back to the anti-nuclear protests of the 1970s and 1980s, which resulted in the cancellation of some 100 nuclear projects in the United States. Environmental groups are now surpassing that accomplishment. In the past five years, according to the Sierra Club, 129 coal plants have been defeated in 37 states by a movement that combines the legal firepower of large, well-funded national organizations with the scrappy tactics of local grassroots groups.

Environmentalists have focused their energies on coal for many reasons, from the destruction caused by mountaintop-removal mining to the health effects of air pollution from coal plants. Foremost among the concerns is climate change, which is primarily caused by the carbon dioxide released from fossil fuel combustion. Bruce Nilles, the leader of the Sierra Club’s push to stop new coal plants, summarizes the problem: “Coal is where the carbon is.”

Not only is coal more carbon intensive than other fossil fuels, it is also more plentiful, with remaining reserves that far exceed those of conventional oil and gas. Citing both factors, James Hansen, director of NASA’s Goddard Institute for Space Sciences, wrote to Nevada Governor James Gibbons in 2008 that phasing out emissions from coal is “80% of the solution to the global warming crisis.”

Considering that coal provides about half of the electricity used in the United States, such a phase-out would be an ambitious task even if society were united in seeking to accomplish it. What makes the task far more challenging is the fact that a politically powerful industry, Big Coal, stands in the way. And that industry is unlikely to step aside without a shove.

Fighting Coal is Nothing New

Of course, fighting over coal is nothing new in America. I know this from stories told by my mother, who was born in 1925 in Dundon, a company-owned town in Clay County, West Virginia. According to family lore, my grandfather, a Presbyterian preacher, was run out of town by the coal company for preaching pro-union sermons. He may have gotten off relatively easy. During that period union organizers in many parts of West Virginia were not only prohibited from holding meetings or entering miners’ homes, many were arrested, beaten, and even killed.

That sort of violent conflict is long past – as is, in some ways, coal mining’s role as a major source of jobs. From its peak in 1923, employment in US coal mines steadily declined as mining became mechanized. Mechanization also gave bosses the leverage they needed to oust unions from most mines. After 1970, production shifted westward toward the massive strip mines of Wyoming’s Powder River Basin. Since coal was no longer used for heating homes, most Americans never saw a single lump. By 2008, the number of workers building wind farms (85,000) had surpassed the number mining coal (83,000).

Although few new coal plants have been built since 1990, more than 600 large coal plants continue to generate power, and the pollution produced by those plants exacts a sickening toll in damaged health and lost lives. Coal emissions are the largest industrial source of mercury pollution, which, according to the EPA, produces an increased risk of learning disabilities in 15.7 percent of newborns.

Another health effect related to the burning of coal is the emission of fine particulates. According to a study released by the Clean Air Task Force, particulates from coal plants result in 23,600 heart and respiratory fatalities per year. But just as coal itself is no longer an obvious part of everyday life, the death toll from coal emissions remains largely hidden from sight, buried in statistics. Until recently, neither environmental nor health-oriented citizen groups devoted major attention to the issue.

Coal’s move to the center stage of public controversy can be traced to the arrival of the Bush administration in 2001. One of Vice President Cheney’s first actions was to convene a secretive task force on energy that began pushing for an ambitious expansion of fossil fuel energy sources. By early 2007, federal reports listed more than 150 proposed coal-fired power plants and coal-based synthetic fuels plants in various stages of planning and permitting.

Initially isolated and scattered, opponents to the building spree began finding each other through online watering holes like the No New Coal Plants listserv, created by Mike Ewall of the Philadelphia-based Energy Justice Network. But other than the Sierra Club, which had begun to organize an anti-coal effort in the Midwest, national environmental groups at first lent little support to the grassroots opposition.

With scant help from national organizations, opponents of power plants found common cause with those battling a surge in Appalachian mountaintop-removal (MTR) coal mining. The first MTR operation began in 1970 when Cannelton Industries blasted the top off Bullpush Mountain in Fayette County, West Virginia, and pushed the rubble into adjacent valleys to expose the underlying coal.

Bonds speaks frequently about the need for Appalachians to unite with anti-coal activists outside the region. “We’re in King Coal’s territory,” Bonds has said. “He’s got his foot on our throat. Thank God for the Internet.”

In, 2005 she and other activists invited students from outside the region to bolster their efforts, and 50 young people arrived for the first Mountain Justice Summer. The activist training camp included rallies, marches, and sit-ins that earned headlines across West Virginia and Virginia. Halting mountaintop removal was becoming a national cause.

Political Space for EPA to Act

At the Purple Mountains Majesty action, the atmosphere is quiet, almost languid. Hours have passed and still there have been no arrests. Despite stern warnings by EPA security people, the authorities appear in no hurry to remove the structures or the protesters perched on top of them.

One of the locked-down activists tells me that EPA Administrator Lisa Jackson just tweeted about the action. “Pro or con?” I ask.

“It’s almost like she wants us to be here,” says the protester, hopefully. That’s not hard to believe, considering how many EPA staffers have offered a smile, a thumbs-up, or an encouraging comment. A few stop to chat with Chuck Nelson, a grizzled 54-year-old West Virginian who spent 28 years working in underground coal mines. Rather than talking about climate change, Nelson describes the immediate impacts of mining on his community. He tells one EPA staffer, “I live in Sylvester, West Virginia, and our water looks like coffee.”

“Bring us the water quality data,” responds the staffer, “and we’ll have something we can work with.”

I check in with Annie Sartor, who confirms that Jackson has indeed tweeted what sounds like a positive message: “People are here today expressing views on MTM, a critical issue to our country. They’re concerned abt human health & water quality & so am I.”

(Republished with permission of Earth Island Journal. To read the second half of this article, please click here.)

Gulf Oil Spill Reaches the Senate in a Shrimper’s Jar

Climate Activists Turn to Political Humor, for a Serious Purpose 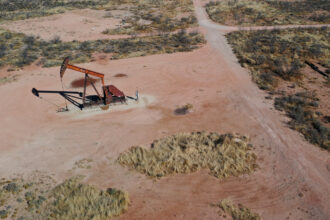