Like Miami, the low-lying coastal city where Democrats will hold their first presidential debates of the 2020 race, the Democratic National Committee is at risk of being inundated.

Fifteen of its presidential candidates, more than 50 of its member organizations in the states, and a slew of progressive organizations that make up its voting base, some armed with petitions bearing over 200,000 signatures, all are now calling for the DNC to hold a separate climate-focused debate. The executive committee of the Democratic party in Miami-Dade County—the U.S. metropolitan area considered most vulnerable to sea level rise and where the first debates will be held June 26 and 27—voted unanimously Monday to urge Democrats to devote one of the 12 Democratic presidential debates to the climate crisis.

DNC Chairman Tom Perez, who rejected a climate-focused debate last week, tried to explain the party’s opposition in a post on Medium on Tuesday, saying it would be impractical to hold a single issue forum “at the request of one candidate.”

The statement, which gamely ignored that the dispute had grown far bigger than Washington Gov. Jay Inslee, the low-polling climate-focused candidate who touched off the climate debate debate, provoked a new wave of outrage from critics within the party’s crucial block of young, climate-focused voters.

“Our very survival as a species is at stake,” tweeted Evan Weber, political director of the youth-led climate activist group Sunrise Movement. “Let’s act like it.”

Sunrise, the young group that has championed the Green New Deal through its marches, social media and Capitol Hill protests, has been organizing a rally ahead of the second Democratic debate in Detroit in July. Using the hashtag #ChangetheDebate, Sunrise has been arguing for a greater focus and strong plans from candidates on climate change—and for a climate-only debate.

DNC on Defensive Against Its Own Base

In addition to the risk of alienating young voters and stoking discord on the eve of its big show in Florida—a state key to any 2020 path to victory—the DNC has backed itself into a defensive crouch on an issue that should be a winner for the party.

Although Democratic presidential candidates differ in their views on solutions, all of them accept the science of climate change. Recent polls suggest that puts Democrats more in step with the electorate than President Donald Trump, whose fossil-fueled policies and denial of the science offer a clear contrast. Of course, Trump’s views on climate change were well known before his election, but the DNC never sought to make climate a battlefront in the 2016 campaign.

The DNC was not alone in ignoring global warming as a political issue. Not one question on climate change was asked by the journalist moderators in any of the three debates between Trump and Democrat Hillary Clinton, despite a drive by environmental and social activist groups to elevate the visibility of the issue in the debates.

Trump and Clinton did answer a jobs-and-energy question from one town hall audience member, a coal industry worker, giving Trump an opportunity to tout his dedication to the country’s “clean” coal stores, which he said would last 1,000 years. Trump did not have to field a single climate change question through 11 GOP primary debates. The only airing of the issue in a candidate forum was an extensive exchange between Clinton and her then-primary opponent Sen. Bernie Sanders during the primaries.

Perez: We Can’t Have Debates on Every Issue

Sanders is one of the 15 current presidential candidates now calling for the DNC to schedule a climate-focused debate. With former Vice President Joe Biden joining the call, all of the top-polling Democratic candidates have voiced support for such a single-issue forum.

Perez said the party had received more than 50 requests to hold single-issue debates on subjects ranging from reform of the criminal justice system, to health care, to voting rights to LGBTQ rights.

“We knew it would be unfair and unrealistic to ask the candidates to participate in so many,” he said. Perez said the party already has made an unprecedented commitment to 12 debates. He said he did not believe the issue would be ignored in those debates as it was in the past.

“I have the utmost confidence that, based on our conversations with networks, climate change will be discussed early and often during our party’s primary debates,” Perez said.

He may be right. The first debate will be hosted by NBC News, MSNBC and Telemundo. Chuck Todd, the host of Meet the Press who will be one of the questioners, has signaled that he takes climate seriously as a political issue—he kicked off the year by devoting a full program to climate change, pointedly giving no time to science deniers on the show. Both MSNBC and Telemundo have given extensive coverage to the Green New Deal and its congressional avatar, Rep. Alexandria Ocasio-Cortez, D-N.Y.

But Tina Podlodowski, chair of the Washington state Democrats, who has organized DNC state members to push for a climate debate, said climate change is such a cross-cutting issue that it deserves its own forum, where its many aspects can be addressed in depth.

“As a grassroots state party chair, I hear daily from people on the ground who say climate change is their top issue for the next President,” she wrote in a post on Medium, also posted Tuesday. Noting its impact on health care and the economy, she said, “Climate change is not a single issue.”

It remains to be seen whether the DNC will be able to bail out from the flood of opposition it is facing from within, or whether it will be forced to seek the higher ground of a compromise on an issue that is promising to animate politics in 2020 as it never has before. 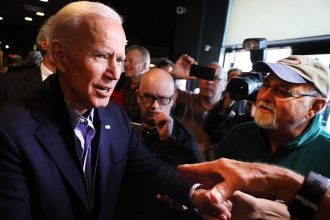