Residential water wells near Marcellus shale fracking in northeast Pennsylvania were more likely to contain higher levels of diesel-like chemicals, especially if the gas well had a history of environmental health and safety violations, according to a peer-reviewed paper published Monday in Proceedings of the National Academy of Sciences.

Brian Drollette, a chemical and environmental engineering graduate student at Yale University and the paper’s first author, called the results encouraging for local residents, because they showed fracking fluids were not moving upward from the Marcellus shale to shallower groundwater aquifers—at least not in the short term. The study authors said this could help improve public health, because residential wells near known surface spills could be monitored and targeted for treatment.

The researchers sampled 64 private water wells and ran a series of highly sophisticated tests to identify contaminants and pinpoint where the chemicals came from. The samples were taken three to five years after the gas wells had been drilled.

“All in all, it’s an excellent piece of science,” said Zacariah Hildenbrand, a scientist who heads an environmental consulting group who wasn’t part of this study. The researchers broke “new ground in terms of characterizing where these constituents are coming from and that has a tremendous amount of value,” he said.

Hildenbrand runs Inform Environmental, a Dallas-based consulting group that often collaborates with the University of Texas-Arlington. In June, Hildenbrand and his colleagues published a study that found higher levels of carcinogens in drinking water located near gas wells in Texas’s Barnett Shale.

Drollette said the Pennsylvania study is the largest to examine organic compounds—including benzene, toluene and chemicals similar to gasoline and diesel—in northeast Pennsylvania, where virtually all the gas wells are developed using high-volume hydraulic fracturing.

One of the chemicals they identified was bis(2-ethylhexyl) phthalate, a plasticizer known to be used in fracking fluid.

All the chemicals in the samples occurred in small concentrations, so they are “likely not a threat to human health,” Drollette said.

Desirée Plata, another study author, said homeowners can remove the chemicals from their water using simple filtration systems. Plata is an assistant professor of chemical and environmental engineering at Yale and Drollette’s faculty advisor.

The Environmental Protection Agency concluded earlier this year that fracking has polluted drinking water in “specific instances,” including documented cases of surface chemical spills. The EPA’s report said there are risks of contamination at every step where fracking fluid is used: from the moment it’s mixed, when it’s injected underground and when it flows back to the surface, where it’s stored in waste pits.

Other studies from academic labs have found higher levels of methane in water wells near Marcellus gas wells.

Drollette said the conclusions of his study only apply to northeastern Pennsylvania. Due to differences in geology, “our results don’t necessarily translate to other shale [fields] in the U.S.,” he said.

Hildenbrand said a larger set of water samples would improve the study, but even this relatively small sample size has produced a “good foundation” that will inspire future research. “My hat’s off to them,” he said.

Plata said her team used analytical methods that can detect minute amounts of contaminants. They were able to measure concentrations that are hundreds or thousands of times smaller than can be detected by the commercial labs Pennsylvania regulators rely on for water testing.

In addition, the team used expensive isotopic analysis to find chemical “fingerprints” that would reveal the source of the chemicals.

They ruled out leaking oil and gas waste ponds as the source of the contaminants, for instance, because waste contains a chemical signature of dissolved salts from the shale formation, and they didn’t find that fingerprint in their water samples. The absence of that brine signature also showed that fracking fluids had not migrated thousands of feet up from the deeper shale.

Next, the team considered whether the chemicals had leaked from a faulty well casing. If that had happened, the samples with higher levels of contaminants would also contain more methane, which they did not, Drollette said.

Finally, they looked at possible contamination from underground gasoline or diesel storage tanks and local traffic. But transportation fuels have easily identifiable chemical fingerprints, which did not appear in their groundwater samples. Nor did they find higher levels of chemicals in samples taken closer to roadways, which suggested that traffic wasn’t the culprit.

They did, however, find higher levels of diesel-like compounds near gas wells with environmental violations.

Plata said the results emphasize the need to manage surface spills and other accidents because the modern fracking boom has brought oil and gas drilling to residential areas. “We need to think about how to manage accidents, because accidents are inherent in any engineering practice,” she said.

Correction 10/13: In an earlier version of this story, the name of the study’s first author was misspelled. His name is Brian Drollette. 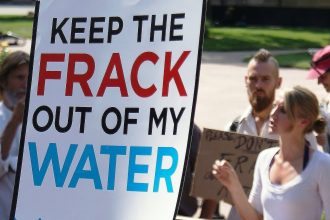