A ruptured well at Southern California Gas Co.’s Aliso Canyon underground facility has spewed more than 80,000 metric tons of methane into the atmosphere since the leak was discovered Oct. 23. The release of the powerful greenhouse gas led to the evacuation of thousands of people from the affluent Porter Ranch neighborhood a mile from the leak after reports by residents of nosebleeds, rashes, headaches and nausea.

“Whatever else may be in the gas—benzene, toluene, xylene —that is what people may be breathing,” said Nathan Phillips, an earth and environment professor at Boston University. “Even though we’re not measuring things other than methane, there is a legitimate concern that there is that other nasty stuff in there.”

The cumulative methane emissions from the Aliso Canyon facility to date have the greenhouse gas equivalent on the Earth’s atmosphere of burning nearly 800 million gallons of gasoline, according to the Environmental Defense Fund.

On Wednesday Los Angeles City Councilman Mitchell Englander called on SoCal Gas to extend its residential relocation program to residents of neighborhoods adjacent to Porter Ranch, according to the Los Angeles Daily News. People in these communities were also reporting similar symptoms related to the leaking gas, according to the paper.  SoCal Gas spokeswoman Kristine Lloyd said the gas company is providing temporary accommodation and air filtration for residents within a five-mile radius of the leak, extending beyond Porter Ranch.

(Click to view a large version of the Google Earth data visualization, seen above.)

“It’s not just in Porter Ranch, it’s going all the way across the [San Fernando] Valley,” Ackley said of the methane plume. The valley is home to 1.8 million people including Northridge, Winnetka and Woodland Hills, neighborhoods across the valley where the researchers confirmed increased methane concentrations.

The agency said the symptoms reported by many Porter Ranch residents can be attributed to mercaptan, an odorant added to the otherwise odorless natural gas. Mercaptan smells like rotten eggs and helps in leak detection. “These odors can evoke physiological responses (e.g. nausea, headaches) without inducing more serious or longer-lasting health effects, such as eye, or respiratory system damage,” the office said.

Independent scientists, however, questioned those findings. The “acute” guideline is “the most cautious interpretation you could take,” Michael Jerrett, the chair of the UCLA Department of Environmental Health Sciences, told the Los Angeles Daily News. Acute guidelines focus on health effects from breathing significantly elevated levels of benzene over a short period but don’t assess the health effects of inhaling lower levels over a longer time. “There’s a potential here for health effects that could be experienced long term,” Jerrett told the paper.

Phillips made the same point.

“We are going in for a half hour at a time to check out the plume, but if I had that as a constant condition in my place of work or home, I would definitely be concerned about it,” Phillips said.

The Office of Environmental Health Hazard Assessment’s analysis was based on measurements that were collected twice daily.

“One thing I was most struck by was the inadequacy of once or twice a day sampling stations,” said Robert Jackson, an earth system science professor at Stanford University who joined Phillips and Ackley in taking methane readings over the weekend.

“There is an array of a dozen sampling stations that sample gases once or twice a day,” Jackson said. “The area needs more real-time continuous sampling.” There should also be additional sampling locations outside the Porter Ranch neighborhood, he said.

“The benzene levels are actually on the low side of what we see typically in the LA area,” said Sam Atwood, spokesman for the air quality district. “They were all 0.1 parts per billion with the exception of one, which was 0.2 parts per billion. Typically we would see anywhere from 0.1 to 0.5 parts per billion. That’s good news. We’re not seeing elevated levels, at least in these continuous 24-hour samples.”

Phillips disputed the characterization of low levels of benzene and other toxic compounds.

“They are documented carcinogens,” Phillips said. “You really can’t say there is a safe level.” 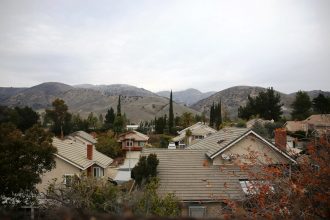 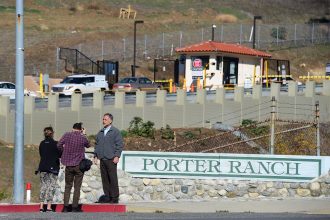 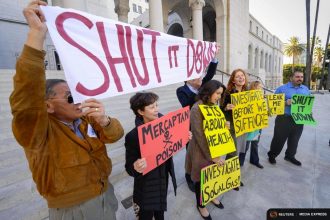