The warmer the Arctic, the more likely the Northeast will be clobbered by blizzards, says a team of researchers who analyzed winter weather patterns going back to 1950.

Citing disruptive storms like Snowzilla (2016), Snowmaggedon (2010) and Snowpocalypse (2009), the climate scientists wrote that “heavy snowfalls are generally more frequent since 1990, and in many cities the most extreme snowfalls have occurred primarily during recent decades.”

Their study, published in the journal Nature Communications, links the increased frequency of extreme winter storms with the rapid and persistent warming of the Arctic since around 1990. When temperatures over the Arctic spike, especially high in the atmosphere, extreme winter weather is two to four times more likely in Boston and New York, while the U.S. West tends to see warmer and drier conditions, they conclude.

Jennifer Francis, a Rutgers University climate researcher and co-author of the study, said that while the study doesn’t show causation, the pattern they found reinforces other studies showing that the declining temperature contrast between the Arctic and the mid-latitudes leads to a wavier jet stream that disrupts normal weather patterns.

Francis said it’s probably no coincidence that five of the past six winters have been persistently cold while the Arctic has experienced record warmth.

But it’s still uncertain exactly where the dips and ridges will occur in any given period. “As we’ve seen this winter, a persistent cold spell can be replaced with a heat wave,” she said.

The persistent pattern that has been in place in recent weeks has caused this month’s parade of “bomb cyclones” along the East Coast, said Penn State climate scientist Michael Mann, who was not involved in the new study. These persistent patterns are exactly the sort of behavior we expect to see with very warm Arctic conditions, he said.

Related research by Mann and others has shown that amplified Arctic warming may be having similar effects in the summer by causing stagnant weather patterns that have contributed to extreme heat waves, droughts and floods in Europe and North America in recent decades.

Purely observational studies can’t always account for all the variable dynamics in the climate system, though. As global temperatures rise, other changes are also having an impact on increasing snowfall in the Northeast and mid-Atlantic, including warmer ocean temperatures and stronger coastal storms, Mann noted.

In the new analysis, the researchers measured air temperatures and pressures over the Arctic cap—the area north of 65 degrees latitude—and compared the readings to a widely used a winter weather severity index. The index comes from more than 100 stations; the study used data from 12 of them.

The results are “literally off-the-charts more robust than previous studies,” said co-author Judah Cohen, a scientist at MIT and director of seasonal forecasting with AER, a weather risk assessment company.

“We see how disruptive to our infrastructure severe winter storms can be with the three deep nor’easters in less than two weeks. This paper obviously advises that governments and companies should not plan for diminishing severe winter weather just yet,” Cohen said.

Cohen and Francis also said the data suggest that changes in the tropical oceans are less of a factor affecting mid-latitude extreme weather than previous research showed.

The effects of the Arctic warming about twice as fast as the global average temperature increase—known as Arctic amplification—go beyond North America.  “Our analysis shows the same relationship (between Arctic warming and extreme winter weather) likely exists across Northern and East Asia and Northern Europe,” Cohen said.

This winter, parts of central Eurasia have stayed much colder than average for weeks at a time, Moscow was slammed with record snows, and Western Europe was visited by the “Beast from the East,” delivering 10-foot snow drifts in Ireland and other places that rarely see a flake.

The Arctic’s Feeling the Changes, Too

The impacts also ripple through indigenous communities in the Arctic, like the Norwegian island of Svalbard and northern Alaska.

On the warm side of the pattern, those areas have been experiencing climate impacts like rain-on-snow events that make it hard for caribou and muskoxen to feed, as well as severe erosion along coasts where there’s an unusual absence of winter sea ice.

“Bizarre winter weather is always disruptive to people and ecosystems, be it persistent cold, frequent snow storms, drought, low snow packs, and even heat waves,” Francis said. “Many flora and fauna depend on regular temperature and precipitation cycles, and when those are disrupted over a prolonged period, we often see a variety of species that struggle.”

Cohen said the winter extremes in the mid-latitudes and the warm extremes in the sub-Arctic are connected. “I would say absolutely these are part of the same pattern. The warm Arctic and severe winter weather in the mid-latitudes are not separate and parallel phenomena but are related and I think should be considered two sides of the same coin,” he said.

Another Symptom of Excess Greenhouse Gases

The links between Arctic warming and extreme winters are another symptom of dangerous climate disruption, Francis said.

“As we continue to load the atmosphere with greenhouse gases, the Arctic will continue to warm faster than elsewhere, and the likelihood of persistent winter weather events is likely to continue and perhaps increase,” she said.

“Decision-makers and individuals must prepare for disruptions to what used to be ‘normal.’ Extremes are likely to increase in frequency owing to a number of climate-change-related effects,” she concluded. 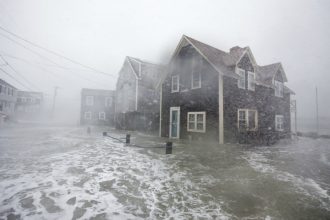 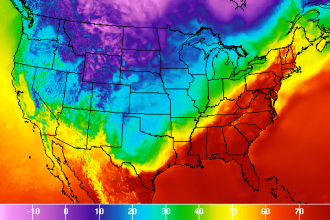