MAYFLOWER, Ark.—Anything for his treasured fishing hole. That was the mantra cycling through Jimmy Joe Johnson’s head on the afternoon of Friday, March 29 as he rushed to keep a filthy stream of crude oil from spilling out of a cove and into the main body of Lake Conway.

Standing at the edge of the lake more than four months later, Johnson had his fingers crossed that his efforts that day weren’t for naught. Officials with the Arkansas Department of Environmental Quality (ADEQ) say they feel certain that soon-to-come results from sediment testing will confirm what water tests revealed—that no oil reached the main body of the lake.

But Johnson won’t stop fretting until he sees definitive proof that the lake wasn’t sullied.

Johnson’s lookout on this steamy August day is roughly nine-tenths of a mile from the spot where oil from ExxonMobil’s ruptured Pegasus pipeline gushed into a subdivision of neat, brick homes. Instinct and familiarity with the local topography guided Johnson and a crew of locals to this site on that fateful Friday afternoon—a man-made dike about the length of a football field and wide enough to support two lanes of State Highway 89 traffic.

The dike isolates a 30-acre, elbow-shaped cove thick with lily pads from the sprawling 6,700-acre Lake Conway. On the day of the spill, Johnson knew he and his team were too late to keep oil out of the cove. But they were intent on stopping the plume of black goo before it contaminated the main body of a lake renowned in central Arkansas for its stocked bounty of catfish, crappie, bluegill and bass.

“We had one mission and that was to keep the oil out of the lake,” Johnson, superintendent of the Mayflower streets department for 15 years, told InsideClimate News. “Once I figured out where the bust was, there was no doubt the oil was headed to Lake Conway. We used everything we had.”

(Read: Cove Where Exxon Oil Has Been Found Is Part of Lake Conway)

Johnson joined volunteer firefighters and public works employees from Faulkner County and Mayflower equipped with dump trucks and backhoes. Together, they scrambled to position plywood, dirt, rocks and close to 1,000 tons of gravel to construct barricades to keep oily water from surging over or through the dike. One of their first jobs was plugging a pair of 48-inch metal pipes connecting the cove and the main lake. Meanwhile, pumps sucked water from the bottom of the cove so it wouldn’t overflow into the lake.

“We was part of a big team,” said Johnson, 50, who grew up fishing in the lake and playing in its network of nearby streams. “We was working to save our lake.”

Ryan Benefield, the ADEQ’s deputy director, is confident the local crew did just that.

So far, water tests in the main lake conducted by the agency have shown no signs of diluted bitumen, Benefield said. That’s the type of heavy Canadian crude that the Pegasus was carrying when it broke. It’s also the type of oil that the Keystone XL pipeline will carry if it is approved.

Sediment testing throughout the spill corridor, roughly a mile long, began July 27 as the spill cleanup evolved from “response” mode, overseen by the U.S. Environmental Protection Agency, to the “remediation” phase, coordinated by ADEQ. Results of the sediment tests are not yet available, Benefield said.

He is convinced the sediment tests also will bring good news because water tests have repeatedly come back clean enough to be below any level of concern.

“We haven’t seen anything in the main body of the lake indicating that it has been affected by the oil spill,” Benefield said. “There’s just no opportunity for the sediments to be impacted.”

Much of the lake is quite shallow, measuring barely six feet deep, Benefield said.

Heavy metals found in diluted bitumen are a major concern with any such spill.

These compounds, which include mercury, manganese, nickel and chromium, are toxic at high doses. Some, such as arsenic and lead, can damage the human nervous system even at relatively low doses.

Genieve Long, a 28-year-old mother and full-time college student who has lived next to Lake Conway all of her life, patrols the lake regularly. She is suspicious of the testing done by ExxonMobil and state authorities, she said, because she doesn’t think they are testing lake channels where she is sure currents carried oil connected with the spill.

Oil had time to breach the State Highway 89 dike before Johnson and other workers built barricades and blocked the pair of culverts, Long said.

“I have a very good knowledge of what goes on in the lake,” she said. “My father was a fisherman who taught me about fish and currents. I’m not trying to cause trouble. I’m trying to make problems go away. I’m concerned about the environment and about people’s health, and that they aren’t getting the attention they need.”

Long said she felt rebuffed by ADEQ officials when she told them several times that she had observed oil near the cove where her family lives.

“They told me it was nothing to worry about, that it’s just natural organisms decomposing,” she said. “I know the difference between what I’m seeing and what I’ve seen all of my life. I have fished this lake, played in this lake, even waded out in it when I was a kid. I know what this lake looked like before the spill.”

In 1948, the state Game and Fish Commission built what is officially known as the Craig D. Campbell Lake Conway Reservoir by damming Palarm Creek. It’s the largest lake ever created by a state conservation area and it fueled a real estate boomlet in the nearby communities of Conway and Mayflower, a city of 2,298 that is ground zero for the ExxonMobil spill. Mayflower is about 20 miles northwest of Little Rock.

While the main body of the lake could be free of oil from the Pegasus spill, oil did reach the cove. Early on, authorities installed sets of absorbent booms and weirs that went from the surface of the water to the soil below to isolate as much oil as possible. While water tests in the cove have revealed that levels of heavy metals are below levels of concern, Benefield said the ADEQ won’t know how successful the cleanup efforts have been there until results of the sediment testing are available.

Cleanups of heavily oiled sites can be massive, intensive and expensive. A Canadian-owned pipeline operator, Enbridge Inc., ended up dredging and then rebuilding an entire creek in Marshall, Mich., after a burst pipeline spewed at least a million gallons of diluted bitumen into wetlands along the Kalamazoo River in 2010. That cleanup is ongoing because the U.S. Environmental Protection Agency estimates that as much as 180,000 gallons of oil remain in the river today.

From Response to Remediation

The cove was upgraded from the response stage to the remediation stage about a month ago, Benefield said. Long-term remediation, headed by the ADEQ instead of the EPA, requires ExxonMobil to design an investigation plan ensuring that no oil is left behind. It calls for multiple rounds of sampling in the lake, the cove and the rest of the spill’s path.

Benefield said his agency still works closely with Nicolas Brescia, the EPA’s on-scene coordinator as it proceeds with the cleanup. Brescia, based at the EPA’s Region 6 Office in Dallas, is no longer at the Mayflower site full time. Brescia said he participates in weekly conference calls with all of the cleanup authorities to monitor progress.

The ADEQ has extensive remediation experience, Benefield said, and is capable of handling oil spills.

The main body of Lake Conway was never off limits to boaters or fishers, Game and Fish Commission spokesperson Keith Stephens said in an interview. Access to the cove was restricted after the spill because so much heavy equipment was congregated there. The cove is now accessible, he added, even though it is rarely used and has never been a popular fishing spot.

Rumors have circulated among lakeside residents that authorities go out early in the morning to collect dead fish in the cove and the lake. Stephens said his agency has never received any reports about dead fish after the spill.

When the spill first occurred, the focus was on the immediate response— removing all of the visible oil in the water, vegetation and soil. So far, the company has spent $47.5 million on cleanup, ExxonMobil spokesman Aaron Stryk said in an e-mail.

The Northwoods subdivision in Mayflower is the only area of the spill still in the response stage, because five homes have yet to be declared oil-free, Benefield said.

Johnson, the superintendent of Mayflower’s streets department, said that if the pipeline had to burst, it’s fortunate it happened in the northwest corner of the subdivision. Any farther north and the oil would have had a much more direct route to the main body of Lake Conway.

“All these years I knew the pipeline was here but I never dreamed of it busting,” Johnson said. “That’s something you hear of in a different state or a different place.”

When a county worker notified him about the spill on that Friday afternoon, he was at home building himself a workshop. He and his co-workers had the day off because they work 10-hour shifts Monday through Thursday.

By the time the rain began that Friday night, Mayflower had about exhausted its 75-ton supply of gravel. County workers supplemented that by hauling in their own gravel from about eight miles away as crews labored through Saturday’s rain.

Johnson praised ExxonMobil for the way its workers tried to slow the oil before it reached the cove.

(Read: Exxon Didn’t Know Its Pipeline Ruptured Until Called by Arkansas Authorities. Or Did It?)

Two major obstacles—a railroad track and four lanes of Interstate 40—meant cleanup crews had to navigate a circuitous, northeastern path to stop the oil as it surged across asphalt, concrete, a grassy culvert 20 to 30 feet wide and wetlands on its path toward the cove and lake. Workers laid out gravel and positioned large pipes at strategic angles so the oil would rise and pool. That way, it was easier to suck it up with vacuums and skimmers.

“When you hear oil spill, you think something happened at a gas station,” Johnson said. “When he told me that an oil pipeline had busted, I said ‘Oh no.’

Then he paused and tugged at the brim of his baseball cap: “I just hope we don’t ever have to.”

This story is part of a joint investigative project by the Arkansas Times and InsideClimate News. Funding for the project comes from people like you who donated to an ioby.org crowd-funding campaign that raised nearly $27,000 and from the Fund for Investigative Journalism. 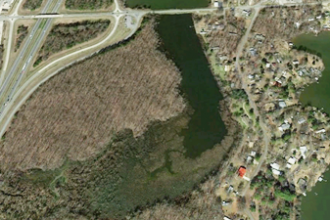