Maryland and Baltimore environmental officials have agreed to extend a consent decree that would allow the state to continue overseeing operations at Baltimore’s deeply troubled Back River Wastewater Treatment Plant through the end of the year, the state said on Friday.

The consent decree was negotiated earlier this year after the Maryland Environmental Service (MES) reported in June that “catastrophic failures” at Back River had resulted in sewage discharges above and beyond its permitted limits. The agency had taken over operations at the plant in March.

The extension of the consent decree, aimed at ensuring the plant keeps working within permitted limits for pollution, must still be approved by the City Board of Estimates, which is expected on Oct. 19.

“The amendment extends the earlier agreement until the end of the calendar year, allowing MES to remain onsite through the end of the year and provide additional resources to help maintain and operate the plant,” said Jay Apperson, deputy director of communications for the Maryland Department of the Environment (MDE).

MDE is also pursuing a separate agreement with Baltimore city for its other troubled wastewater treatment plant, Patapsco, to ensure that it also has a clear path to achieving compliance with its permit limits, Apperson said, adding that the “plant’s performance has significantly improved in recent months.”

Systemic failures at both facilities, the state’s two largest wastewater treatment plants, contributed to significant increases in nitrogen and phosphorus pollution last year in Chesapeake Bay, according to the Chesapeake Bay Program, a regional partnership between government agencies at all levels, environmental groups and academic institutions.

The latest inspection report by the Maryland Department of the Environment on the Patapsco facility said in September that “failing and nonfunctioning process equipment are preventing Patapsco from meeting the effluent limitations.”

The majority of these equipment issues have been outstanding for months and many for over a year, the investigators reported. Other areas flagged for immediate improvement included inventory management, digitization of nutrient removal systems and the removal of elevated hydrocarbon concentrations in  plant sludge that could cause a fire hazard and the potential for an explosion.

On Wednesday, a federal judge in Maryland ordered Baltimore city authorities to submit monthly reports about the status of improvements at the Back River and Patapsco wastewater treatment plants and whether the facilities are in compliance with their permit requirements.

In June, Blue Water asked the court to order immediate corrective action at Back River after the MES cited “catastrophic failures” there. Griggsby denied Blue Water’s motion for immediate relief on Wednesday, but asked both parties to propose a schedule for the suit to proceed.

“In fact,” said Angela Haren, senior attorney with the Chesapeake Legal Alliance, “the court noted in her decision that Blue Water Baltimore is likely to win on the merits of the case overall.”

Haren said the preliminary injunction would have required Baltimore city to take certain immediate steps before the final resolution of the case, but the court found that the city has started this work since the motion was filed last spring.

Haren said the judge asked the city to report every 30 days on plant improvements and on its progress toward negotiating a settlement with Blue Water Baltimore and the state.

According to another MDE inspection report issued in September, only three of the 11 primary settling tanks at the Back River facility are operational, with the rest in a state of disrepair. The tanks allow the solid material within wastewater to be easily separated by settling to the bottom or floating to the surface for removal.

In addition to these internal problems, Baltimore city residents started complaining in  mid-August about foul odors emanating downwind from the plant’s sludge lagoons, where the wastewater is being stored.

Still, the MDE has reported improvement in certain areas at Back River. Earlier in the year, the situation was so dire that the MES evaluation said: “The violations occurring at the Back River WWTP have evolved into a situation where this is now equivalent to an extreme event, and these issues need to be addressed on an emergency basis.”

The agency cited a lack of cooperation from the Baltimore Department of Public Works and reported that ”the lack of responsiveness in addressing critical issues that need to be addressed to get the plant back in compliance keeps frustration high and is having an impact throughout the facility.”

Blue Water Baltimore, in a statement, said its lawsuit had led to ”enhanced accountability and cleaner water for Baltimore residents” and called for “a legally-binding consent decree with all parties involved to stop the excessive flow of pollution and account for the damage that has already been done to the rivers, and the people who live, work, and recreate near them.” 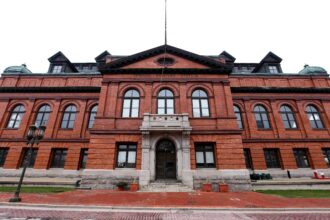