The market that supplies special sand to oil and gas companies for fracking wells is down more than 50 percent from last year. But those opposing the sand industry for its threat to property values, the environment and public health aren’t celebrating—they are fighting harder to shut down the industry for good.

“In terms of opposition to frac sand mining, there really is no lull at this point,” said Johanna Rupprecht, a policy organizer with the Minnesota-based Land Stewardship Project. “People are as concerned about this as they’ve ever been.”

“I don’t think anybody on the ground really believes the downturn is permanent,” she added.

An oil glut has driven down prices and sent the entire fracking industry into a tailspin over the summer. That’s also when Land Stewardship Project launched a campaign to ban the industry from expanding in Minnesota’s Winona County. Small towns across eastern Minnesota and western Wisconsin are taking action in a different way, including efforts to pass stricter zoning rules and to boot pro-sand leaders out of office.

Wisconsin and Minnesota are the first- and fourth-largest frac sand producers in the nation, respectively. The two states hold vast reservoirs of pure silica sand, a vital ingredient for fracking. It is used to blast down wells, along with water and chemicals, to open cracks in shale bedrock and extract oil and gas. It can take up to 10,000 tons of sand to frack––or hydraulically fracture––a single well during its lifetime.

As fracking boomed over the last decade, the sand market took off, too. The number of sand mines, processing and transport facilities in the two states jumped from fewer than 20 in 2010 to more than 100 by 2014.

That rapid growth provided the region with new jobs and millions of dollars in new development. But there was also a growing backlash among citizens concerned about the large sand facilities’ consequences in public health, the environment, and sound and light pollution. For example, the tiny dust particles that can fly off the sand during mining, production and transport have been implicated in silicosis, a lung disease.

Since the end of last year, crude oil prices have dropped to an average of less than $50 per barrel, down from between $90 and $110 a barrel. (Last week, the price of oil per barrel rose above $50 for the first time since July). In response, operators are increasingly dialing back more expensive forms of fossil fuel production, such as hydraulic fracturing.

With less fracking, demand for frac sand has plunged. In 2014, the sand market hit a record $4.5 billion. This year, the market will be closer to $2 billion, according to analysts at PacWest, a consulting unit of IHS Inc.

Wisconsin has been especially hard hit, with a number of facilities shutting down and laying off workers. However, according to regulators at the Wisconsin Department of Natural Resources, the number of active frac sand facilities has actually increased since last year.

In Minnesota, which has far fewer sand facilities than Wisconsin, operators are mostly responding to the demand reduction by cutting their hours. However, one exception is Shakopee Sand mine, which announced in July that it would be temporarily closing the mine until demand picks back up.

“Nobody is happy about the harm done to these communities,” said Rupprecht. But this economic bust does show what some people have been concerned about for a while, she explained, that “this industry does not provide permanent economic prosperity.”

Those concerned about frac sand production’s environmental and public health threats welcome the slowdown in production.

“It has been a very nice summer here since frac sand production has declined,” said Jane Cowgill of Winona, a town near the Minnesota-Wisconsin border. In recent years, Winona has become a major hub for frac sand transport, with hundreds of trucks hauling sand through its streets daily.

“We have seen fewer trucks coming across the interstate bridge from Wisconsin, though some rail shipping carried on a bit,” said Cowgill. Moreover, the town’s port has stopped shipping sand altogether. Just last year, the Winona port shipped a record 400,000 tons of sand.

“We are not sanguine about the future, though,” Cowgill wrote in an email to InsideClimate News. “We know that the oil prices will go back up and that sand will be in demand again.”

Rich Budinger, head of the Wisconsin Industrial Sand Association, a trade group, is similarly confident the industry will rebound. “This is nothing new. Experienced companies understand the volatility and know how to deal with it,” he said.

Taking a Stand Against Sand

With the future in mind, residents are taking advantage of the frac sand pause to push their cause. In Winona, for example, the local group Citizens Against Silica Mining, of which Cowgill is a co-founder, is pressuring the city council to install air monitors around town to track industry-related emissions.

In 2014, the city was the subject of a one-year project largely funded and run by the air regulators at the Minnesota Pollution Control Agency to track frac sand emissions. Preliminary results showed emissions were too low to pose a major threat, but citizens such as Cowgill said the monitor wasn’t close enough to the town’s major sources of silica dust.

Responding to local frustration, Land Stewardship Project started the campaign to ban the industry in Winona County. So far, this has involved spreading awareness and passing out hundreds of lawn signs that read: “Protect Winona County,” with the words “Frac Sand” crossed out underneath.

The next step is to petition the county board to add an amendment to the zoning ordinance that would halt further industry growth, said Rupprecht.

In Houston County, directly south of Winona County, two local groups, Houston County Protectors and Families Resisting Energy Extraction (F.R.E.E.) are spearheading opposition. Last week, the county’s planning commission voted down a proposal to ban the mining of frac sand. But citizens there remain committed to the cause, according to Houston County resident Kelley Stranage, a vocal critic of the sand industry.

Towns in the region are also trying to strengthening their local zoning ordinances, such as adding rules to limit industrial noise and light pollution.

In other cases, communities are trying to oust pro-sand advocates from office. For one, the mayor of Arcadia, Wis., John Kimmel, may face a recall, partly due to his refusal to extend a local frac sand moratorium. 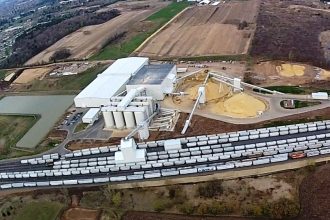 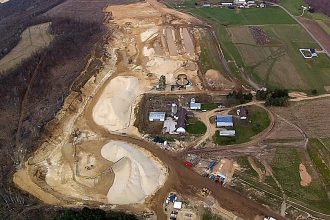 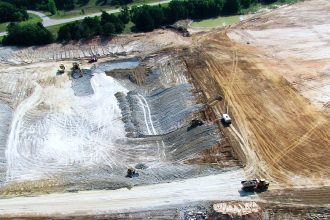