Throughout Tuesday night’s Democratic presidential debate, there were signs of the strong progressive push on climate action that is animating the presidential race as it reaches a critical moment.

Contenders for the nomination, in their final face-off before the Feb. 3 Iowa Caucuses, were eager to show their commitment to climate action as integral to policy across the board.

At one point, one of the moderators, Des Moines Register chief politics reporter Brianne Pfannenstiel, implored the candidates to stick to the subject of international trade. “We’re going to get to climate change,” she promised.

The candidates’ repeated return to the subject of climate change marked a dramatic turnaround from previous election cycles, when it rarely surfaced at candidate forums and routinely ranked far down on the list of voters’ concerns.

Leading the push to propel climate to the top of the agenda has been the youth-led activist group Sunrise Movement, which champions the Green New Deal and endorsed Sanders last week—a fact he made sure to mention. 350 Action, the political arm of the climate advocacy group 350.org, also launched a drive aimed at getting former South Bend, Indiana, Mayor Pete Buttigieg to strengthen his climate platform: “We don’t have time for middle-of-the-pack climate plans,” 350 Action said in its online petition.

The primary season climate offensive raises questions that will be pivotal to the effort to defeat Trump and end the drastic setbacks to global climate action under his administration. Will ardent young climate activists stay engaged if a moderate Democrat, like Biden, wins the nomination? If the party chooses a progressive like Sanders, who advocates an end to fracking, will he be able to win over enough moderate voters to defeat Trump—especially in swing states like Pennsylvania, which have come to rely heavily on natural gas production?

As important as those questions might be, the candidates are sweeping them aside for now. With polls showing that Iowa’s likely Democratic caucus participants consider climate change on par with health care as a top voting issue, the candidates see little to lose by staking out the strongest possible action plans on cutting greenhouse gas emissions.

“All of the candidates are positioning themselves as climate hawks,” said Edward Maibach, a professor at George Mason University’s Center for Climate Change Communication. “They want to be seen as real leaders eager to do what’s necessary to address the climate crisis.”

Maibach, a principal investigator of an opinion survey on climate conducted in partnership with the Yale Program on Climate Change Communication, said the candidates appear to be taking their cue from the potential voters they are hearing from. The Yale-GMU project, which will be unveiling its latest political survey next week, has been tracking a pronounced shift in sentiment favoring strong climate action that goes beyond the liberal wing of the party.

“With the exception of conservative Republicans, Americans’ views of climate change have evolved rapidly over the past five years,” Maibach said. “They are increasingly coming to understand that climate change is a present-day problem, not just a future problem, and they are becoming more worried about it as a result. Moderate and conservative Democrats are the group whose views have changed the most.”

Jeremy Symons, a public affairs consultant specializing in climate change and environmental issues, agrees with Maibach’s assessment. “One thing’s clear—the Democratic nominee will benefit enormously by leaning in full-throttle on climate change, because it is one of the rare issues that can mobilize turnout of the base and resonate with undecided voters,” he said.

In Tuesday’s debate, the moderates sought to make clear that they were in synch with the most progressive candidates on climate. Buttigieg, for example, didn’t take the bait when he was prodded by businessman Tom Steyer over why, as the youngest candidate, he didn’t have a more progressive plan on climate. His plan, he maintained, was as strong as any other candidate’s. “This issue is personal for me,” Buttigieg said. “It’s why we’re going to tackle climate from day one.”

Sen. Amy Klobuchar (D-Minn.), asked why she did not support a ban on fracking, skipped over providing an explanation of why she sees natural gas as a transition fuel. Instead she stressed her 100 percent rating from the League of Conservation Voters and the fact that, like the other candidates, she has a goal of net zero carbon emissions by midcentury. “Nearly every one of us has a plan that is very similar,” she said. Warren and Sanders are also rated 100 percent by the League of Conservation Voters.

Klobuchar will have a chance to raise her climate profile by participating in a climate forum sponsored by The Weather Channel two days before the Iowa Caucuses. The only other candidates participating are Steyer and former New York Mayor Michael Bloomberg, both of whom have made climate leadership central to their campaigns.

Bloomberg, a billionaire who is funding his own campaign and therefore cannot participate in the debates under Democratic National Committee rules, this week unveiled a plan to require all new buildings to have net-zero carbon emissions by 2025. The plan, which emphasizes a transition to renewable energy instead of natural gas, marks an evolution in Bloomberg’s own thinking on climate. Although he previously supported natural gas as a transition fuel, it “isn’t as clean as we thought,” he said.

Sunrise Movement Goes All in for Sanders Early

Many environmental activists who expect to go all-out in an effort to defeat Trump have put off choosing a candidate among the Democrats this early in the race.

Sunrise Movement, on the other hand, decided to turn its get-out-the-vote effort in Iowa and New Hampshire into a field program directly supporting Sanders.

“We believe a Bernie Sanders presidency would provide the best political terrain in which to engage in and ultimately win that struggle for the world we deserve,” said Sunrise Executive Director Varshini Prakash.

Sanders, who is advocating a $16.3 trillion, 10-year mobilization to enact the Green New Deal, a massive shift in federal government spending to create jobs and hasten a transition to clean energy, has pledged nearly 10 times the federal investment in climate action that Biden has promised. The Green New Deal has been attacked relentlessly by fossil fuel allies, and even supporters of climate action acknowledge the steep hurdles it would face on Capitol Hill, where a proposal for a much smaller, $33 billion investment in clean energy died at the end of the year.

But these numbers, in themselves, signal how far the political ground on climate has shifted—Biden’s call for a $1.7 trillion federal investment in tackling climate change marks nearly 30 times what Hillary Clinton promised when she sought the Democratic presidential nomination four years ago. Although he didn’t mention the Green New Deal by name during the debate, Biden has sought to frame his climate platform with the epic sweep its advocates are seeking. “We’re the only country in the world that’s ever taken great crisis and turned it into great opportunity,” Biden said.

Symons argues that who emerges as the Democratic nominee is not as important as the continued engagement of climate activists in the general election and beyond.

“The differences between the candidates’ plans are real,” he said, “but they pale in comparison to the two big issues that will really decide what happens on climate change—first of all, whether we defeat Trump, and secondly, whether the winner will make climate change the No. 1 priority for spending political capital early in their new presidency.”

Sunrise Movement leaders sought to show they had their eyes on that bigger picture, even while they focus on electing Sanders in the short term.

“If Senator Sanders does not win the nomination, the stakes of the climate crisis also demand that we can’t sit this election out,” said Sunrise’s political director, Evan Weber. “No matter what, we will be steadfast in advocating for the defeat of President Trump and his fossil fuel cronies at the ballot box.” 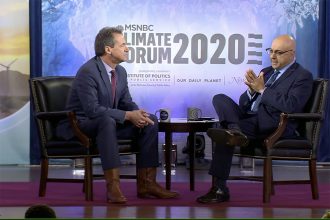 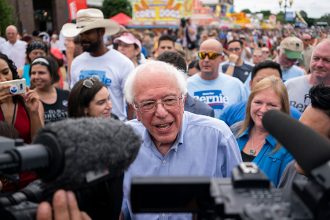