KARNES COUNTY, Texas—After 23 years living on the South Texas prairie, Lynn and Shelby Buehring are looking for a new home, far from the fumes, traffic and noise of the Eagle Ford Shale boom.

It will mean leaving the white house beneath the oak trees where they expected to live out their retirement. The decision, said Lynn, 58, was a measure of last resort, dictated by her deteriorating health and failed attempts to get help from state regulators.

“We’re not anti-drilling at all,” she said. “My complaint is they need to do it in a responsible way… It’s just causing me a lot of medical issues, and I can’t have it.”

Buehring’s symptoms began when the drilling rigs arrived in late 2011. Her asthma worsened from a seasonal nuisance to the point where she needed two rescue inhalers and made frequent use of a breathing machine. She also developed chest pains, dizziness, constant fatigue and extreme sensitivity to smells.

Today there are at least 57 oil and gas wells and nine processing plants within 2.5 miles of the Buehrings’ house. These facilities have the state’s permission to emit hundreds of tons of air pollutants per year, including volatile organic compounds like benzene and formaldehyde and toxic hydrogen sulfide, which aggravate respiratory conditions.

Lynn Buehring now covers her nose and mouth whenever she’s outside. On a windy day in early May when this reporter arrived at her house, she wore a mesh cloth mask while walking from the front door to the driveway. She kept it on as she petted the cats—Prissy and Hemorrhoid (“a pain in the butt” who noses his way into everything)—and as she showed off Shelby’s “man cave,” a barn with a homemade jukebox and decorative beer bottles.

Next to the man cave is a red barn where Buehring runs her tax accounting business. “There’s been many a time when my customers will say, ‘What is that terrible smell outside?'” she said. The fumes range from a rotten-egg odor (characteristic of hydrogen sulfide, a naturally occurring and sometimes-lethal gas) to an indeterminate chemical smell and something she describes as a combination of petroleum, baby poop and sulfur.

“Sometimes there’s a yellow haze or mist out there, and my tax customers have to walk through that,” she said. “How dangerous is that?”

Without health studies it’s impossible to know whether the emissions are causing Buehring’s symptoms. A recent eight-month investigation by InsideClimate News, the Center for Public Integrity and The Weather Channel revealed that despite hundreds of complaints from local residents, Texas regulators know little about air quality in the 26-county Eagle Ford region, which has nearly 9,000 wells and another 5,500 permitted. As many as 23,000 more wells may be drilled by 2018, according to some projections.

Celeste Monforton, a public health researcher and a lecturer at George Washington University, said at least some of Buehring’s symptoms are consistent with known health problems that can be caused by the types of pollutants emitted from oil and gas facilities. “You’re talking about volatile organic compounds, particulate pollution, hydrogen sulfide—we know a lot about how those compounds affect the body.”

If public health officials in the Eagle Ford want to know how the emissions are impacting people, they can study the health of local residents and analyze the information for patterns, she said. “Their burden of proof in terms of taking action should not be on each individual person demonstrating that this was the cause of their illness. Their mission and responsibility is to look at what happens to the population.”

The Buehrings began to seriously consider relocation three months ago, when Lynn’s symptoms took a turn for the worse. She developed balance issues and would fall over sideways “for absolutely no reason,” she said. Her hands trembled so much she feared she had Parkinson’s disease, though a doctor later ruled that out.

Both she and Shelby had trouble sleeping at night due to the industry-driven truck traffic, which tended to peak between 1 and 4 a.m, Buehring said. Soundproof boards they installed over the bedroom windows proved ineffective.

“I told [Shelby], I can’t live this way and I can’t work this way. Enough is enough.” And Shelby agreed “we’ve got to get out of here.”

Two weeks ago, they went house-hunting in Tivoli, a small town in Refugio County near the Texas Gulf Coast. It was the first time in two months that Lynn could breathe outdoors without wearing a mask.

“We went fishing, and just relaxing,” she said. “I felt 90 percent better.”

‘Nobody’s There to Help’

Buehring’s experiences over the past three years have changed how she feels about her country. “I thought we had people in place that were going to help the small man,” she said. “And then I find out that the rug’s been totally pulled out from underneath me. I feel like I’m one person out there all by myself…and there’s nothing I can do. Nobody’s there to help.”

Buehring has filed numerous complaints with the Texas Commission on Environmental Quality (TCEQ), which oversees air quality within the state. One of her first complaints, in January 2012, described “a terrible odor accompanied by a wet mist that burned the eyes and nasal areas, and caused tightening in the chest.”

TCEQ investigator Carol McGrath visited the Buehrings several days later and encouraged Lynn to keep an odor log. McGrath also surveyed seven nearby oil and gas facilities and noted two flares trailing black smoke but no odors. Like many of the facilities near the Buehrings, these sites were owned by Marathon Oil, a Houston-based company worth nearly $25 billion as of 2013.

Over the next few weeks, Buehring kept detailed notes on the air quality near her home:

Feb.18, 2012,  2:30 Strong South Wind. Didn’t notice an odor at first but it gave me an awful migraine headache. The smell was a sulfur sweet smell and my ears plugged up when I went out to take something to the can barrel. I had to do a shot for the migraine and 2 breathing treatments.

Feb. 19  1:00 p.m. Oily smell in the air. Couldn’t tell where it was coming from. Wind direction was changing constantly. 2 breathing treatments.

In March, McGrath returned with other TCEQ staff and air monitoring equipment. According to their report, the investigators noted such high concentrations of volatile organic compounds at one Marathon site that they “evacuated the area quickly to prevent exposure.” Marathon repaired the leak that same day and no fines were issued. McGrath later collected Buehring’s odor log before giving it back, saying it couldn’t be used as part of the investigation.

Buehring said that led her to give up on the TCEQ. For most of 2013, she relied on the assistance of Keith Mingus, a local Marathon supervisor. The Buehrings said Mingus introduced himself to them, gave them his phone number and often arrived five or ten minutes after they called with a complaint.

“He was wonderful,” Buehring said. “He would try to get to the bottom of it. He didn’t push us off—he really sounded concerned.”

She said Mingus was transferred out of the region in late 2013. The Buehrings haven’t met his successor and don’t know who to call at Marathon when there’s a problem.

In an email, company spokeswoman Lee Warren said Marathon places “a high value on being a responsible operator and a good neighbor.”

She said the company has hosted five community meetings in the Eagle Ford within the last two years, three of which were in Karnes County.

Charlie Malik, chief of Karnes City’s volunteer fire department, said Eagle Ford companies have provided his department with additional equipment, including a trailer for fire-fighting foam, hydrogen sulfide monitors and a water truck. “Marathon and all the oil companies around here have been very good to us. All you have to do is ask.”

On Tuesday, 15 firefighters from Malik’s department responded to a fire at a Marathon well site where workers were pumping oil and other flammable liquids into a tank. Malik said it was a “contained fire” that would have burned itself out in time.

“No injuries were reported and no loss of containment occurred,” Warren said in an email.

Buehring started a new odor log in 2014 after Mingus left Karnes County. She’s called the TCEQ eight times since March 19, but only one of those complaints appears in the agency’s online database. Buehring said she left numerous voice mails that were not returned.

TCEQ investigator Jeff Seiler visited the Buehrings in mid-April. Buehring said she asked if he could help her obtain a wind sock—a simple device that indicates the wind direction—from Marathon. She hoped to place the sock in her yard to help determine when it would be safe for her to go outside. She said Seiler told her to contact Marathon directly, but did not provide a phone number.

InsideClimate News called the TCEQ for comment, but agency spokesman Terry Clawson would not discuss anything on the phone. “The TCEQ follows up on citizen complaints aggressively and in a timely manner, and has proactively conducted reconnaissance activities to identify emission sources,” Clawson wrote in an email. “To date, the TCEQ has found no indication that authorized air emissions from oil & gas operations are causing adverse health effects in the Eagle Ford Shale or any other area in Texas.”

Buehring said she wants the agency to “fine Marathon more, where it hurts them, so some of this would be stopped. And if there’s something dangerous around us, inform us so I know [when] I need to stay in.”

Buehring has reached out to the office of state Sen. Judith Zaffirini, a Democrat who represents much of the Eagle Ford region, including Karnes County. In a phone interview Thursday, Zaffirini said she would like to know whether stricter air permitting rules used in the Barnett Shale in North Texas should apply in the Eagle Ford, and whether rules could be established to limit how close to schools and homes wells could be drilled.

On Friday, Zaffirini’s staff is to meet with the TCEQ to discuss air quality in Karnes County, and whether the state can set up a permanent air monitor in the county.

The Buehrings, meanwhile, are continuing their search for a new home. Lynn hopes to find a house near San Antonio so she has easy access to her doctors.

This story is part of a project by InsideClimate News, the Center for Public Integrity and The Weather Channel. 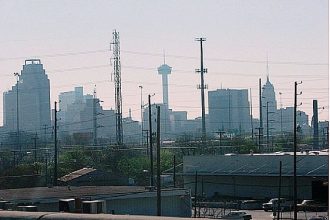 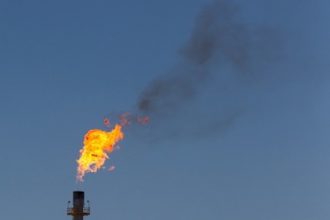