The Navy has dropped its plan for development of an 18-hole golf course on Greenbury Point, a wetlands forest adjacent to the Naval Academy in Annapolis, after an outcry from environmentalists and a competing proposal from Anne Arundel County to lease the habitat for public use as a nature preserve.

Before Anne Arundel County Executive Steuart Pittman floated the idea of a nature preserve lease last week in a letter to a top Navy official, the Navy was considering a sole-source lease that Naval Academy Golf Association had been quietly pursuing through Navy channels to turn much of Greenbury Point, a protected wildlife and natural resources sanctuary bordering the Severn River and the Chesapeake Bay, into a 150-acre golf course.

A statement from the Navy late Monday said it was no longer considering the plan for the golf course or the recent Anne Arundel County proposal to manage the site instead as a conservation area open to the public.

“We received competing proposals from Anne Arundel County and the Naval Academy Golf Association for a sole source lease and management of Greenbury Point, which makes it no longer possible to consider either party’s request,” the statement, by Ed Zeigler, director public affairs for the Naval District Washington, said.

The statement came as leaders of Maryland’s congressional delegation, Sens. Benjamin L. Cardin and Chris Van Hollen and Reps. John P. Sarbanes and C.A. Dutch Ruppersberger, said in a letter to Navy Secretary Carlos Del Toro Monday that any proposal for Greenbury Point must protect the “environmentally sensitive” area, maintain public access to its trails “at current levels, or preferably enhanced,” and be in compliance with the Chesapeake Bay Critical Area and “fully protected in perpetuity.”

In his statement, Zeigler said that the Naval Support Activity Annapolis, which manages a total of 280 acres on the peninsula, “is currently evaluating the status and future of Greenbury Point in support of the mission of both the installation and the U.S. Naval Academy.”

The plan to put a golf course on a critical conservation area was submitted by the president of the Naval Academy Golf Association (NAGA), Chet Gladchuk, to Navy Secretary Carlos Del Toro on Feb. 15. Gladchuk is also the Naval Academy’s director of athletics.

Greenbury Point, with wetlands and wetland forest, features a picturesque blend of wilderness, nature trails and scenic water views, and is home to a wide variety of plant and animal species. It lies within the critical area designated by the state of Maryland as crucial to the health of the Chesapeake Bay and its tributaries.

In an interview last week, Pittman, the Anne Arundel County executive, said that he believed  Naval authorities would seriously consider his proposal for a nature preserve. “They were glad that I called and spoke to them, and that they are certainly open to alternative proposals,” Pittman said.

He cautioned, however, that the golf course proposal was still on the table. “I think they’re going to have to make some decisions in the coming months about which direction to go,” he said, referring to Naval authorities.

Environmental advocates and activists opposed to the golf course plan have cautiously welcomed Zeigler’s statement walking away from the proposed golf course.

“We are encouraged by Mr. Zeigler’s statement on Greenbury Point, even though it does not foreclose the possibility of a golf course outright,” said Jesse Iliff, executive director of Severn River Association, adding that it appears a competitive bidding process that invites substantial change to the natural area could still be in the offing.

“The fact that the golf course proposal was not summarily rejected at the outset is concerning,” he said, “We will continue to monitor the situation and see how the Naval Academy Golf Association responds, but we’re not going to hang up the ‘mission accomplished’ banner just yet.”

Joel Dunn, president and CEO of the environmental nonprofit Chesapeake Conservancy, said he was “hopeful that this reflects a positive change of course for the Navy, but I know with absolute certainty that the community will continue to advocate strongly for the permanent conservation of Greenbury Point Conservation Area and for continued equitable public access until that outcome is achieved.”

Greenbury Point is open to the public for hiking as a nature preserve when it is not being used, sporadically, as a training ground by the Naval Academy.

The Navy’s decision followed reports by Inside Climate News about the controversial golf course proposal, which the Navy had publicly acknowledged it was reviewing in late June.

As word of the proposal then began to circulate publicly, the environmentalists in Annapolis and Anne Arundel County expressed alarm, saying construction of an 18-hole golf course on the wetland forest would negate Navy’s commitments to conservation efforts in the Chesapeake Bay and contradict the Biden administration’s executive order on climate that sets a goal to conserve 30 percent of the nation’s lands and waters by 2030.

New documents obtained this week by an Annapolis resident under the Freedom of Information Act and shared with Inside Climate News show that Navy officials had already started laying the groundwork for the new golf course at least as far back as January.

Throughout the controversy, the Navy had maintained that there was no project in the works and it was just a “conceptual proposal.” Navy officials created an online FAQ page, mostly repeating the assertion that it was no more than “a proposal,” brushing aside public concerns and demands for transparency.

But the new documents include a presentation dated Jan. 10 outlining numerous environmental and permitting requirements that the officials listed as needed in order for the golf course project to advance.

The presentation described a number of laws and environmental regulations that the golf course project would trigger, including under the National Environmental Policy Act (NEPA), stormwater permitting requirements, archeological surveys and policy and statutory guidelines for natural resources management and conservation.

Also among the documents was  an email exchange between officials from the Public Works Department of the Naval Support Activity Annapolis (NSAA), dated March 1.

The department’s director wrote to a colleague that he had received a request from Gladchuk to lease land at Greenbury Point to the Naval Academy Athletics Association “to construct and operate a second golf course.” (There is already an existing 18-hole course at the Naval Academy).

The correspondence listed 14 separate documents needed for the ground work to begin on the project. The list included a map and legal description of the property, lease terms, administrative fees and a justification for why the Lessee should be the Naval Academy Golf Association.

Sue Stienbrook, an Annapolis resident-turned-activist who’s been leading opposition to the golf course proposal, said the documents confirmed the suspicions that the residents had expressed all along. “And they were telling us that our emotions were high and we were speculating,” she said. 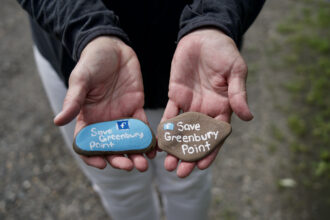