In just eight days in mid-February, nearly a third of the sea ice covering the Bering Sea off Alaska’s west coast disappeared. That kind of ice loss and the changing climate as the planet warms is affecting the lives of the people who live along the coast.

At a time when the sea ice should be growing toward its maximum extent for the year, it’s shrinking instead—the area of the Bering Sea covered by ice is now 60 percent below its average from 1981-2010.

“[Bering sea ice] is in a league by itself at this point,” said Richard Thoman, the climate science and services manager for the National Weather Service Alaska region. “And looking at the weather over the next week, this value isn’t going to go up significantly. It’s going to go down.”

In places like Saint Lawrence Island, where subsistence hunting is a way of life and where there are no land mammals to hunt, thin ice can mean the difference between feeding a family and having to worry about where the next meal will come from.

Villagers on Saint Lawrence Island who participate in an autumn whale hunt—and who rely on whale meat for survival—just got their first whale of the season in early February, Thoman said. The whaling season is usually finished by Thanksgiving, but this year, as the ice formed later than ever before, the whales did not migrate past the island like they usually do.

“They were starting to get into panic mode,” Thoman said of the island residents. “Some of these communities are reeling.”

The satellites that scientists use to monitor the sea ice look at the extent of the ice, but they don’t read the thickness of it. “The satellite says there’s ice there, but it might not be ice that people can work with,” Thoman said. “In some cases it’s not even stable enough for marine mammals to haul out on.”

The Arctic Loses Its Cool

The Arctic is often referred to as the world’s refrigerator—cool temperatures there help moderate the globe’s weather patterns. This winter, which has seen deep freezes at lower latitudes while temperatures have soared in the North, it seems like the refrigerator may have come unplugged.

The last two years were the Arctic’s warmest on record as the region continued to warm at about twice the global average. The National Oceanic and Atmospheric Administration noted in its annual Arctic Report Card in December that Arctic sea ice has been declining this century at rates not seen in at least 1,500 years.

“It used to be just the summer when the ice was breaking low records, but we’re starting to see winter really get into the act now,” said Mark Serreze, the director of the National Snow and Ice Data Center.

“Both the atmosphere and the ocean are really conspiring to keep sea ice levels down,” he said.

As Arctic sea ice limps along toward its maximum extent, which it usually hits in mid-March, it appears to be on course for the fourth consecutive year of record lows.

“There’s actually now open water in the southernmost Chukchi Sea, just north of the Bering Strait,” Thoman said. The only other time on record that the Chukchi Sea has had open water this time of year was in 1989, he said.

On the Atlantic side, sea ice is also low in the Barents and Greenland seas. And in January, a tanker ship carrying liquefied natural gas from Russia became the first commercial ship to cross the Arctic’s northern sea route in winter.

With sea ice levels also low in the Antarctic, the National Snow and Ice Data Center reported this month that global sea ice extent was at a record low.

“As a scientist, it’s really shocking to see some of this and try to wrap your mind around what’s happening and the pace that it’s happening,” Thoman said. 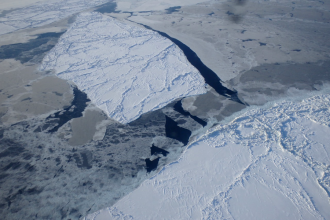