The National Hockey League and Chemours have formed a partnership to promote the chemical company’s synthetic Opteon refrigerants as “environmentally sustainable,” despite them being far worse for the climate than ammonia, the most widely used ice-rink refrigerant, a Washington-based environmental advocacy organization concludes in a new report.

The report, released Wednesday by the nonprofit Environmental Investigation Agency, said that the NHL, in promoting Opteon as its “official refrigerant solution,” is “spreading dangerous misinformation and choosing a super-greenhouse gas over a zero-emission alternative.”

If the more than 4,000 community ice rinks in North America follow the lead of some NHL arenas and convert from ammonia to Chemours’ Opteon refrigerant, the EIA said, “it would be the equivalent of the annual emissions of over 15 coal fired power plants.” And if Chemours were to succeed in converting just 15 percent of the world’s commercial refrigerants from ammonia to Opteon, according to the report, hydrofluorocarbons in the atmosphere would increase by the equivalent of 300 million metric tons of CO2, more than the entire amount of HFCs currently emitted by the United States.

“The NHL accepted money from Chemours to spread dangerous climate misinformation,” said Alexander von Bismarck, EIA Executive Director. “It’s surprising to us that the NHL, which advertises its ‘green’ credentials, would want to use its brand to promote super greenhouse gases as environmentally sustainable during a climate emergency. NHL fans, and all of us, deserve better.”

Jennifer Neziol, a spokesperson for the NHL, said the Environmental Investigation Agency hadn’t shared the full report with the league. “Until we have had a chance to read and review that report, it would be premature for us to comment.”

Chemours said EIA has mischaracterized their agreement with the NHL.

There “appear to be factual inaccuracies regarding our relationship with the NHL, which is focused on providing education on refrigerant solutions to rinks across North America that are faced with the need to address environmental regulations as well as economic sustainability concerns,” Thomas Sueta, a spokesperson for Chemours said in a written statement. “Chemours offers a robust portfolio of Opteon products to reliably meet a broad range of performance characteristics with favorable cost and safety profiles when compared with alternatives like the ammonia option advocated by EIA.”

Sueta, who had not yet seen the full report as of Tuesday afternoon but had been apprised of its key findings, added that “this and similar sensationalized stories will not deter us in our efforts to help community ice rinks reduce their environmental footprint while maintaining ice performance requirements and safe environments for rink operators and the communities they serve.”

He said Opteon refrigerants have a lower global warming potential than other synthetic refrigerants that have been previously used in ice rinks and are safer and less expensive to maintain than ammonia.

“Teams and rink operators are choosing to engage with Chemours and its Opteon solutions over other options because they see it as both cost effective and a more environmentally sustainable option than the older refrigerants they were previously considering,” Sueta said.

Sueta’s reference to helping community rinks reduce their environmental footprints and address environmental regulations was an apparent reference to those now using a refrigerant known as R-507, which was marketed as a replacement for the now-banned, ozone-depleting refrigerant R-22. R-507, and other similar refrigerants, are even worse for the climate than Opteon, which is thousands of times more warming of the atmosphere than carbon dioxide, the primary cause of climate change, over a 20-year period. It is unclear how many rinks use R-507 or similar refrigerants today.

As for safety, ammonia has higher toxicity and flammability than Opteon refrigerants, though neither issue has been a major concern for ice rinks, and while ammonia costs less than Opteon, Chemours says Opteon has lower maintenance costs.

Ammonia has a global warming potential of zero, meaning it does not contribute to climate change when emitted into the atmosphere, and it has been used as a refrigerant for the past 100 years.

A press release posted on the NHL website in April 2020 appears under the headline: “NHL, Chemours continue to promote sustainable rink solutions.”

“The NHL and Chemours are doing their part to promote sustainable rink solutions across hockey at all levels in North America,” the release says. “Opteon, the official refrigerant solution of the NHL and a sustainable refrigerant alternative for ice refrigeration chiller systems, has been a big part of the NHL’s focus on sustainability.”

The release quotes Chuck Allgood, who holds a Ph.D. and is a refrigerants technology leader at Chemours: “Critical to our partnership with the NHL is assuring sustainable infrastructure for all the places and spaces hockey is played, from brand new, world-class arenas hosting tens of thousands of guests to local, small-town rinks that serve as community hubs, and every ice facility in between.”

Craig Smith, senior director of engineering at the Pepsi Center, which recently changed its name to the Ball Arena and is the home of the Colorado Avalanche, says in the release that switching to Opteon as a refrigerant was “a pretty easy decision.”

“Since upgrading to the new low GWP Opteon refrigerant we’ve reduced our arena’s environmental footprint while maintaining our dependable performance,” Smith says. “Operationally, based on the data collected and our direct observations, Opteon has performed flawlessly and exactly as expected.”

Based on the Pepsi Center success, the press release says, other NHL facilities may consider the Opteon family of refrigerants. 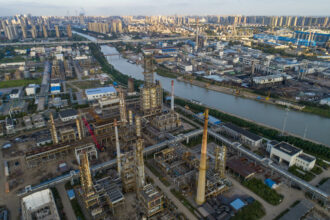