New York Gov. Andrew Cuomo surprised environmentalists Thursday when his administration banned hydraulic fracturing in the state, citing public health concerns. The move puts an end to years of heated debate between activists and the oil and gas industry—and could help buoy the case against fracking in hundreds of similar fights happening across the United States.

“This is an overwhelming victory,” Sandra Steingraber, an environmental health expert and fracking activist in New York, told InsideClimate News. “Fracking is able to roll over so many communities because people are told it is inevitable. This decision emboldens us all. It shows this fight is winnable.”

Steingraber talked about the decision from the parking lot of a sheriff’s office where she was bailing out 28 musicians arrested in an ongoing protest against a fracked gas storage facility in the Seneca Lakes region of New York. She said that when she told the activists the news, they picked up their instruments and there was “singing and dancing in the streets.”

Cuomo’s decision, announced at his final cabinet meeting of 2014, was based on the results of a long-awaited scientific study by the New York State Department of Health on the health impacts of hydraulic fracturing. The drilling method involves injecting a mixture of sand, water and toxic chemicals deep underground to force oil and gas to the surface. According to the state’s health study, the practice can release toxins into the air that can trigger breathing problems. Surface spills can contaminate soil and water. Waste disposal can trigger surface-water contamination and potentially earthquakes. In addition, the study said the release of methane and other volatile organic chemicals into the atmosphere can contribute to climate change.

“The potential risks are too great. In fact, they are not even fully known,” said Dr. Howard A. Zucker, the state’s acting health commissioner, the New York Times reported.

The ban is seen as a bold move by a governor whom political experts say may be eyeing a presidential bid in 2016.

“By banning fracking, Gov. Cuomo has set himself apart as a national political leader who stands up for people, and not for the interests of the dirty fuel lobby,” Michael Brune, executive director of the Sierra Club, said in a statement.

Colorado environmental activist and blogger Shane Davis called the move “probably the single greatest decision that any state collectively has made yet” on fracking. He told InsideClimate News that a governor has finally “listened to the activist community and the health communities, too.”

New York’s decision comes at time when fracking is driving an energy boom in the United States, especially in Texas, North Dakota, Colorado and Pennsylvania. More states than ever are making moves that would open their lands to the intensive form of energy extraction. This year, North Carolina and Maryland announced plans to end their temporary fracking bans and put in place new rules for the industry. Illinois welcomed new fracking rules in November.

Former Gov. David Paterson enacted a moratorium on fracking in New York six years ago. Unlike states such as Colorado, where judges have struck down local fracking bans, New York’s high court has ruled in favor of local control over oil and gas development in the towns of Dryden and Middlefield. Hundreds of New York towns have banned fracking or passed their own moratoriums out of fear that state officials in Albany would approve the drilling practice.

Steingraber, Davis and other anti-fracking and environmental leaders told InsideClimate News the decision could impact fights elsewhere in the country.

“This is great news for us,” she told InsideClimate News. “It sets a big precedent.”

Zack Malitz, campaign manager of the online activist network CREDO, said in a statement that, “Governor Cuomo has now set the national standard.”

“The governors of states like California and Colorado, who are facing the same pressure from concerned citizens that pushed the Cuomo administration to take action, must now decide whose side they are on: the side of their state’s citizens or the fossil fuel industry,” he said.

Oil and gas industry representatives were predictably upset about the Cuomo administration’s decision.

Karen Moreau, executive director of the New York State Petroleum Council, said in a statement that the ban was “short-sighted and reckless.”

“Today’s action by Governor Cuomo shows that New York families, teachers, roads and good-paying jobs have lost out to political gamesmanship,” she said. “This is a missed opportunity to share in the American energy renaissance, and for New York’s future prosperity.”

According to a statement by Brad Gill, executive director of the Independent Oil and Gas Association of New York, the group is “disappointed—but not entirely surprised.” For the many oil and gas companies that have left New York in recent years “for greener pastures in Pennsylvania, Ohio, or elsewhere…they made the right decision.”

Steingraber said that while the ban is great news for New York, it does not address the extensive fracking-related infrastructure that is planned for the state. More than 150 activists have been arrested protesting the transformation of the Finger Lakes region in western New York into a natural gas storage and transportation hub.

“Even with this news, the fight against fracking in New York will continue,” she said. 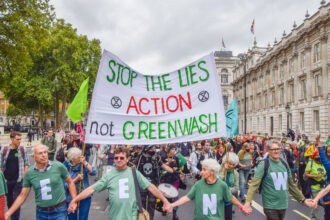